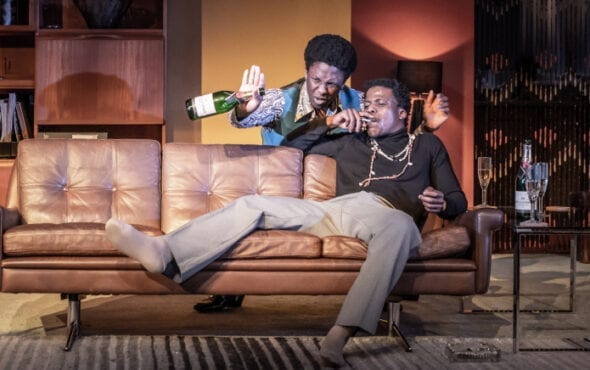 Almost 50 years on from its debut, Alfred Fagon’s play returns to the Hampstead Theatre, directed by Dawn Walton.

We didn’t expect a play with a name like this to be an easy watch, but The Death of a Black Man presents really quite a challenging evening at the theatre. Over the course of two hours it considers a range of big issues including race, gender, class and cultural appropriation. These are not nice and well-rounded characters; they all have their flaws, while their language and attitudes – which we’re sure are reflective of what was deemed acceptable in the early 1970s – make for uncomfortable viewing now. Expect homophobia, misogyny and antisemitism.

The show focuses on the lives of Shakie (Nickcolia King-N’Da), an 18-year-old living in an improbably nice flat in west London, his best friend Stumpie (Toyin Omari-Kinch), and Jackie (Natalie Simpson), the middle-class mother of Shakie’s child who has unexpectedly come to visit. We never meet the titular black man, but we learn that he is Shakie’s father and that he dies destitute and alone in Manchester. A talented musician, he is unable to get bookings other than pub gigs due to the colour of his skin.

There isn’t really a plot as such – the show focuses on a series of late-night conversations which explore the big issues. Against a backdrop of racial discrimination, Shakie and Stumpie are determined to make successes of themselves, whether that’s by selling “African Chairs” to affluent white people, or London water to American tourists. We get less of an insight into Jackie’s background and motives, and over the course of the show her situation becomes both quite improbable and extremely distressing. There are some solid acting performances on display here. We were particularly impressed with the way the actors slipped between Received Pronunciation, cockney and Jamaican patois depending on the mood or situation – it felt very natural. There are significant shifts in tone and style too, with act one being much more naturalistic while the second sees characters breaking the fourth wall and addressing the audience directly.

We haven’t seen anything quite like The Death of a Black Man since theatres reopened and it certainly provides some interesting food for thought. It’s a difficult watch – those looking for some uplifting entertainment should really be looking elsewhere. But sometimes we like being challenged, and this certainly gave us lots to think about long after we’d left the theatre.