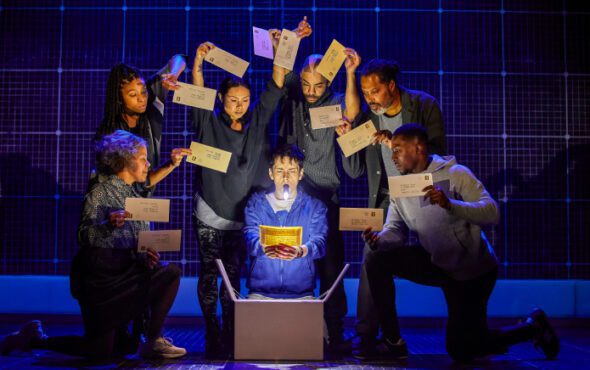 The revival of the National Theatre’s production has opened at the Troubadour Theatre in Wembley Park following its successful West End and Broadway runs, directed by Marianne Elliott.

It’s not hard to see why the National Theatre’s Olivier and Tony Award winning production of The Curious Incident of the Dog in the Night-time is such an enduring success. Adapted by Simon Stephens, and based on the novel by Mark Haddon, it tells the story of Christopher Boone – a teenager with an incredible talent for maths, but has numerous behavioural issues and finds everyday life a challenge. He sets out on a quest to solve the mystery of a dead dog, and ends up uncovering a much more complex series of events. Not only is the tale itself a heart-warming one, but this production is nothing short of a masterpiece.

It’s full of excellent performances. Our protagonist Christopher is played by neurodivergent actor Connor Curren; his is a nuanced and honest performance, full of vulnerability – we were immediately endeared to him. It’s difficult to pick a standout performance, however – both Sophie Stone as his mother Judy, and Rebecca Root as his teacher Siobhan, are superb. It’s an ensemble piece, though, and there are no weak links – in fact some of the biggest highlights occur when the cast work closely together to deliver some wonderful moments of physical theatre.

We couldn’t review this show without giving credit to the set and the staging, too. This is an absolute audio and visual treat – a full-on sensory experience from the start, it borders on feeling like an immersive theatre piece even though there isn’t any audience interaction. We were completely drawn in – everything looks incredibly striking; dream sequences and nightmare scenes are fully realised and completely engrossing. Even at a two-and-a-half hour run time we were captivated from start to finish.

We can’t really find fault with this production – it has everything we want from a night at the theatre and more besides. It’s a charming little play, full of warmth and humour, and delivered by a talented cast who rally together to deliver something quite remarkable. It’s pretty much flawless – grab a ticket while you can!