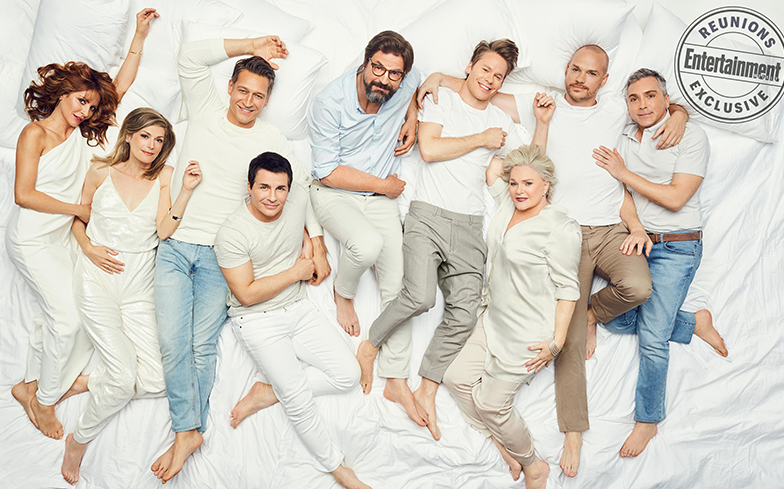 The cast of Queer of Folk reunited for the first time in 13 years for Entertainment Weekly’s Pride issue.

Created by Russell T. Davies, the iconic LGBTQ show was based on the British series of the same name, and historically became the first hour-long drama on American television to portray the lives of homosexual men and women.

The dramedy also featured storylines that touched upon sensitive issues such as same-sex marriage, HIV/AIDS, drug use, gay bashing, underage prostitution and discrimination within the workplace.

Executive producer Ron Cowen reflected on the show’s impact: “We saw it as an opportunity to address a lot of issues that had never been shown on American TV before. That was very important to us because we, gay people, didn’t really see a true reflection of ourselves on TV very often. “Back then, you couldn’t get married. There was Don’t Ask, Don’t Tell in the Army. In 14 states, there were still sodomy laws on the books. It was a very hostile atmosphere.”

He continued: “We thought the major backlash would be from right-wing religious people, but we never heard a word. The show received criticism from gay people and gay organizations, but they never said we weren’t telling the truth.

“As we often said, ‘If you don’t like the reflection you see in the mirror, don’t blame the mirror.’'”

Gill said: “I think the sexuality — and the honesty of that sexuality — propelled us throughout the whole series.”

Clunie – who memorably played Gill’s partner on the show, Melanie – opened up about the pair’s first love scene together, and reminisced on the preparation they did to make it as authentic as possible.

She told EW: “I remember Thea and I got together the night before our first sex scene, and we actually practiced kissing because we felt it was very important that it was a real, intimate connection between these two women who had been together for so long.”