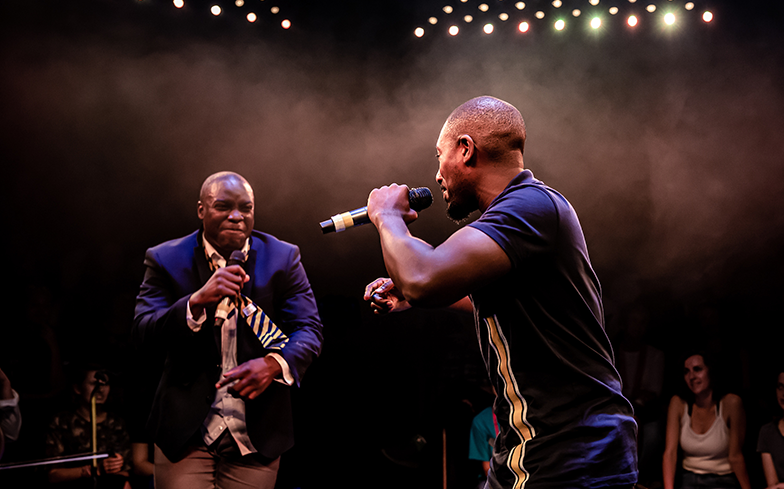 Daniel Ward’s striking debut show, an autobiographical account of his time at school, has opened at Dalston’s Arcola Theatre, directed by Paul Smith.

The Canary and the Crow is unlike anything we’ve seen for quite some time. An electrifying piece of gig theatre, it details Daniel Ward’s real-life story as a black working-class student who wins a scholarship to attend a prestigious – and almost exclusively-white – grammar school. Featuring original live music by Prez 96 and James Frewer – a blend of hip-hop, grime and classical – this show picked up the Bright Fringe Award for Excellence last year and it’s not hard to see why.

It tells an important story – Ward may attend the school to receive a conventional education, but while there he also learns what his privilged white classmates deem he needs to do to be an ‘acceptable’ black person. The lessons he attends don’t so much give him an insight into the subjects being taught; they really provide a series of illuminating observations about how he differs from his contemporaries. He is a charismatic storyteller, filling the show with energy, humour and smart observations.

It looks demanding – there are only four actors taking on multiple roles and this high-energy show is performed in the round. Daniel Ward is the star – this is his story, and he’s the focal point throughout – but there’s not a weak link here. Nigel Taylor is convincing as underdog Snipes, who is let down by a system rigged against him; Rachel Barnes lends her keyboard skills and operatic vocals to proceedings, while amusing with some entertainingly over-exaggerated accents; and Laurie Jamieson is just hilarious in every part he plays.

We’re aware that The Canary and the Crow is an unconventional and unusual proposition which may not be to everybody’s tastes – it may make some theatregoers feel a little uncomfortable. But to discount it on those grounds would be to miss the point entirely – it’s a playfully provocative show, and one that offers, at times, an electrifying experience. A great way to spend 90 minutes – we’re happy to recommend it.

GAY TIMES gives The Canary and the Crow – 4/5