The Boy Friend a delightful evening of escapism – review 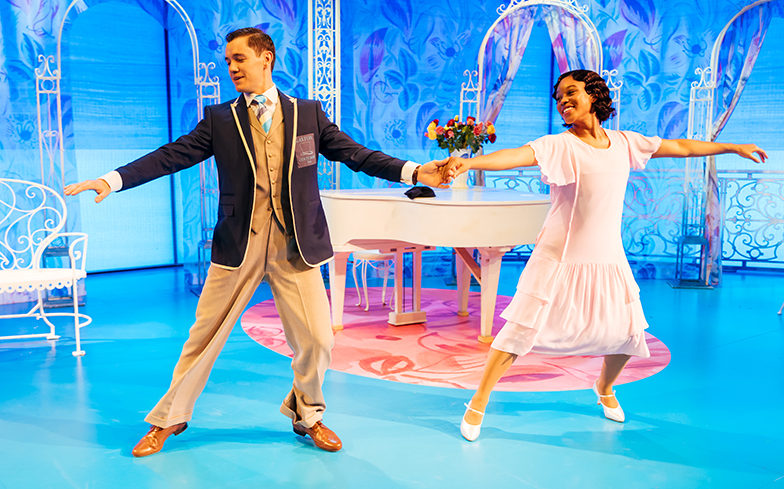 Sandy Wilson’s 1953 musical has been revived at the Menier Chocolate Factory, in a new production directed by Matthew White.

For those unfamiliar, The Boy Friend is Sandy Wilson’s homage to the roaring 1920s. Set over the course of an afternoon and evening in the French Riviera, it tells the very low-stakes story of millionaire’s daughter Polly Brown, who is attending finishing school in Nice. Embarrassed that she doesn’t have a date for the ball that evening, she fabricates a letter from a lover, leaving her just a few short hours to find herself a boyfriend. A subsequent chance encounter with the handsome Tony unfolds predictably.

There’s little else going on in what is a rather wafer-thin plot – the other narratives all revolve around some sort of romance. Don’t let that put you off, however – The Boy Friend is the most fun we’ve had at the theatre in quite some time. This is largely down to a collection of stellar performances from the talented cast – the dancing is genuinely jaw-dropping. We didn’t realise we were fans of the Charleston, but Gabrielle Lewis-Dodson and Jack Butterworth’s sickening routine left us gagging.

It’s all accompanied by some delightfully whimsical music, overflowing with great punchlines. It’s hardly thought-provoking or technical stuff but it’s catchy and energetic. Safety In Numbers – which considers the risks of limiting one’s options when it comes to finding romance – is an amusing number. Amara Okereke in the lead as Polly also duets beautifully with Janie Dee as the school’s formidable headteacher Madame Dubonnet. It’s worth noting that the songs have had a few cosmetic alterations, to make some of the problematic lines more palatable for a socially progressive audience.

We’re aware of The Boy Friend’s shortcomings – it’s a very simple story, the characterisation is one-dimensional, the stakes are low, everything that happens is entirely predictable. Yet this production is so perfectly crafted – it’s a charming show, choreographed to perfection, and the actors deploy exemplary comic timing – that we challenge anyone not to enjoy it. Sometimes it’s nice just to sit back, relax and be entertained – and for those who want to hide away from the world and pretend 2019 didn’t happen, this provides a delightful evening of escapism.