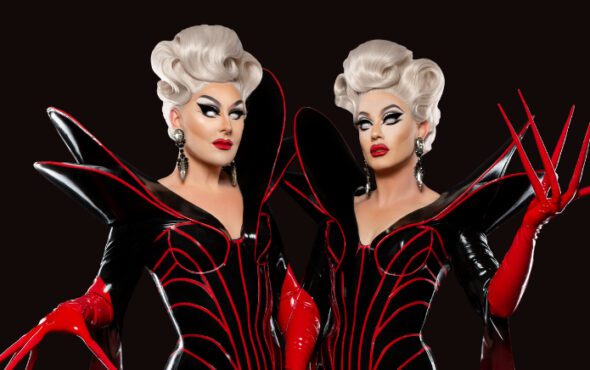 Hello Uglies! No, not you – that’s how we’re greeted by our hosts for the evening, the iconic Boulet Brothers, as we arrive at The Clapham Grand in London.

For those unfamiliar with their TV show Dragula, it’s a competition to find the world’s next drag supermonster – complete with $100,000 prize money. It may sound like a familiar concept, but this horror-themed show is delightfully dark and subversive, and is also wonderfully inclusive of all kinds of drag. From the start it has featured a deliciously diverse lineup of artists – including lesbian women, transgender performers and non-binary contestants.

Dracmorda and Swanthula – aka The Boulet Brothers – keep things on track for the evening, punctuating the show with their performances and introducing each of the monsters in turn. For the current tour, we have the top four monsters from the show’s fourth season – featuring reigning champion Dahli, the ‘Runway Demon Queen’ Saint, killer beauty queen Sigourney Beaver and the show’s first international contestant Hoso Terra Toma, a leading drag artist from the Seoul scene.

This twisted troupe present quite the macabre drag variety show, each afforded two opportunities for a lip sync in their own unique styles, and later joining forces for a rock band moment performed as a quartet. The Boulet Brothers open and close each act, and there’s even some audience participation – ranging from a simple question-and-answer session through to recreating a challenge from the show.

Our opening show in London was incredible. Thanks to all who came out and partook in the ritual! Edinburgh, Glasgow and Newcastle are next. Get tickets to the Boulet Brothers’ Dragula S4 Tour at: https://t.co/OnAEzkDa1C (photo by @CorinneDinDin ) pic.twitter.com/xBsxTDNvsY

This involved three victims – sorry, volunteers – being challenged to eat a whole bulb of garlic (skin on) then washing it down with a pint of what looked like blood (we hope it wasn’t, but it looked convincing). It was one of those moments where we felt like we really shouldn’t be enjoying it, but we couldn’t stop watching.

The show is held together with some super slick production values – the audio/visual treats between each act are a real delight. They’re not simply a device to allow our performers time to get on and off stage, or facilitate a quick outfit change – although we’re sure they’re used for that function too – but they genuinely augment the action. They add another element of suspense and foreboding to what is already a delightfully creepy collection of performances.

We had a blast with The Boulet Brothers Dragula Live – we have four diverse and engaging performers, a pair of enigmatic hosts, a rock band routine and an audience challenge to throw in some variety, and impressive production values. It’s touring the UK until the end of March – well worth checking out if you can make one of the dates.