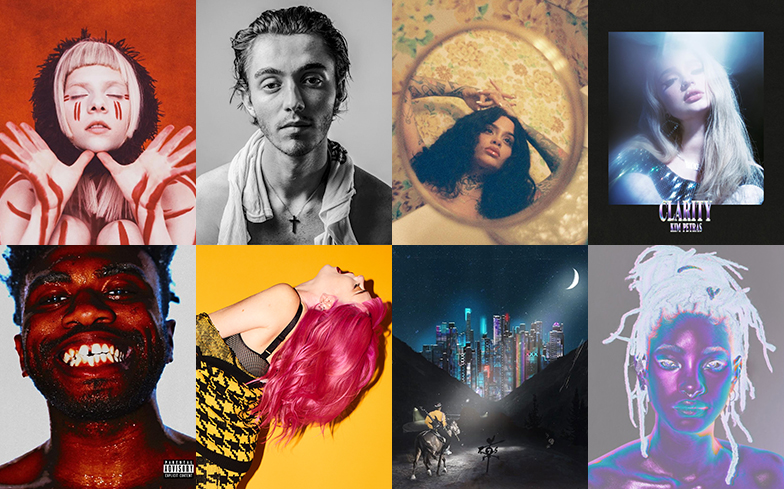 Music by LGBTQ artists has never felt so exciting.

From the avant-garde pop of Dorian Electra to the funk-driven soul of Steve Lacy, and the tight rhymes of Tyler, The Creator to the synth-pop bops of GIRLI, queer talent are producing some of the most vibrant, vulnerable and victorious music out there.

Here for our mid-year report, we round up 16 of the best albums by LGBTQ artists that have been released in 2019 so far.

We’re not in the business of ranking because all of the albums listed below are worth exploring and celebrating – that’s why we’ve popped them down in alphabetical order.

Aurora: A Different Kind Of Human

Norway’s euphoric-pop connoisseur Aurora blew us away when she released A Different Kind Of Human, the cinematic second ‘step’ (or half) of her new album. While Step One was introspective, Step Two sees Aurora looking outwards, making noise and questioning how we can help save the world from climate change before its too late. Yes, the overarching theme is political, but its also a hugely enjoyable album. Put your headphones on, sit back, and let Aurora take you on a journey. DM

Gender-fluid pop star Dorian Electra continues to peddle their brand of high-camp pop on debut album Flamboyant, one of the most creative, experimental and flat-out bizarre releases you’ll hear all year – in the best way possible. If you’re looking for pleasant background listening, you definitely won’t find it here. This is pop music turned up to the extreme, with the kind of addictive hooks you’d hear on the charts but sliced up, stomped on and chucked in a sparkly blender. DM

GIRLI: Odd One Out

After making a name for herself in the industry as a punk-pop goddess with feisty bops such as Girls Get Angry Too, Girl That I Met On The Internet and Not That Girl, British singer-songwriter Girli finally released her debut album earlier this year to critical acclaim. The record tackles a variety of genres from bubblegum pop, punk, rap and PC, with lyrics that provide a much-needed commentary on feminism, sexuality and mental health. She’s using her platform to ignite conversations on ‘taboo’ subjects, whilst remaining the life of the party at the same time, and we are here for it. SD

In 2009, Greyson Chance made headlines with his viral performance of Lady Gaga’s pop anthem Paparazzi. He subsequently received a record deal and released his debut teen, pop-rock album, Hold On ’til the Night, but it wasn’t Greyson at his most authentic. So this year, he made his real music industry debut with his soft-rock and synthpop sophomore album, Portraits, which sees the star reflect on his own personal experiences with past relationships and, unlike other openly-queer artists, he uses gender specific pronouns in his songs. Greyson is ready to be the gay pop star he didn’t see in the mainstream and he’s doing it on his own terms. SD

The Japanese House: Good at Falling

If the album artwork for Good at Falling wasn’t clue enough of the record’s expansive production, opening track Went To Meet Her sets the tone immediately. British musician Amber Bain – aka The Japanese House – has crafted a collection of songs that feel both euphoric and intimate. Maybe You’re the Reason is one of the best alt-pop anthems this year with its bouncing guitar riffs and beats, while dream-bop Follow My Girl has an addictive refrain perfect for festival sing-alongs. As well as being one of the most compelling records of the year, lyrically it’s also one of the most vulnerable. LC

K.Flay had a tough job following up her second studio album, Every Where Is Some Where – which received Grammy nominations for Best Rock Song and Best Engineered Album – but lo and behold, she’s somehow surpassed it. While Solutions lacks some of the anger from her previous two efforts, it still boasts K.Flay’s political electro-rock bite, particularly in songs such as Good News, I Like Myself (Most of the Time) and This Baby Don’t Cry. We recently spoke to the star about how her first queer romance with fellow artist Miya Follock influenced the album, read here. SD

Kehlani: While We Wait

Okay, it’s not necessarily an album, but it has nine songs, so. Kehlani’s third mixtape, While We Wait, isn’t too much of a deviation from her critically-acclaimed debut album, SweetSexySavage, with its euphoric R&B production and smooth vocals, but it feels like Kehlani at her peak (so far). The mixtape’s first single, Nights Like This – a collaboration with rapper Ty Dolla Sign – is one of her finest moments to date, as well as Butterfly, RPG and Feels, and if they’re an indication of how her sophomore album will sound, she will be ruling the charts next year. SD

If releasing a No.1 album with his collective Brockhampton didn’t keep him busy enough last year, Kevin Abstract was also busy in the background crafting his own solo collection. Arizona Baby packs a harder punch than his previous record American Boyfriend, but Kevin’s knack for sharp storytelling packed full of honesty and emotion is on full glorious display here. From his explicit rapping about his gayness on Big Wheels, to the gentleness of his queer love song Baby Boy, Abstract serves up a revolutionary record as an artist at the forefront of hip-hop’s future. LC

After winning over a legion of loyal fans – and racking up some incredible streaming numbers – with her first musical era of 80s-influenced pop bops like Heart To Break and I Don’t Want It At All, Kim returned this year with her first proper ‘collection’ of songs, Clarity. It featured a more mature sound from the pop princess, from dark mid-tempo Broken to trap-laced hook-up bop Got My Number. It also features Sweet Spot, which sounds like Daft Punk and 2000’s Kylie had a love child, and remains one of our favourite tracks of the year so far. DM

With his viral hit Old Town Road storming out of the blocks earlier this year, Lil Nas X had a few months to get a small collection of music to his fans. The result is his debut EP titled 7, giving us an insight of what is to come. Follow-up single Panini is as addictive as his breakthrough hit, with a whistle line that will swirl around your head for days. He teams up with fellow rap star Cardi B on Rodeo; his country and hip-hop influences swirling in a Wild West production to maximum effect. And then there is the final track, C7osure (You Like), which starts with an upbeat piano line before launching into the lyric “Ain’t no more actin’, man, that forecast say I should just let me grow”. Lil Nas X would later confirm that it serves as his coming out anthem – and one the LGBTQ community as a whole will resonate with. LC

Miley Cyrus: She Is Coming

After ditching her Disney image with raunchy hip-hop inspired album Bangerz, going full experimental on Soundcloud album Dead Petz, then returning to her country roots on Younger Now, Miley Cyrus fans were left in the dark about where the pop chameleon would be heading next. Enter new release She Is Coming, the first of three EPs which will eventually form one full-length album. Aside from the incredible feminist anthem Mother’s Daughter, the EP sees Miley once again team up with Mike WiLL Made-It, and even features a guest verse from drag superstar RuPaul on fierce track Cattitude. DM

As queer people we like to challenge the status quo, and no-one is doing that with such spectacular style right now than Orville Peck. In an age of social media the amount of over-sharing that comes with it, this North American crooner has somehow managed to keep his identity secret. Instead he lets the music do all of the posturing, along with his masked lone ranger style. Pony’s opening track Dead of Night instantly puts his Elvis-like quiver front and centre over a backdrop of throwback country pangs and a gentle lilt. For all its camp, country music doesn’t have a great track record for celebrating LGBTQ artists, but Orville is putting his queerness unapologetically into the lyrics and themes of his songs here. Sonically, Pony may reference the past, but its purpose is paving way for a more inclusive future in country. LC

Don’t let the title fool you, there’s nothing dank or unpleasant about this record. In fact, Northern Irish singer-songwriter SOAK’s second album Grim Town is packed with alt-pop anthems primed to soundtrack indie discos for years to come. Knock Me Off My Feet is a prime example, its wistful sentiment launching into a bonafide subtle banger. It’s just one instance where SOAK’s increased confidence is in full swing. Maybe and Deja Vu continue her knack for an anthemic refrain, all but ready to blow the roof off at gig venues across the globe. It places SOAK as one of the most exciting queer talents in alt-pop right now. LC

There’s very few 21-year-olds who can claim collaborations with the likes of Kendrick Lamar, Solange and Vampire Weekend, but The Internet band member Steve Lacy is one of them. It meant anticipation for his full-length debut, Apollo XXI, was high. To combat that he took somewhat of a side-step to what he had become known for, instead opting for a more funk-driven and alt-pop sensibility. Playground shows this off best, its striding guitar riffs, high falsetto and sci-fi squiggles echoing that of Prince. The nine-minute-long Like Me morphs through genres, blending elements of R&B, soul and hip-hop. As for that slapping bassline, Guide thrives with deep funk and jumping beats. The final result is as accomplished as his production discography is before it. LC

After garnering four consecutive top five albums on the Billboard 200, Tyler, the Creator finally reached the summit earlier this year with his fifth studio album, Igor. Fitting, because it’s potentially his best body of work so far. Igor still boasts Tyler’s signature frantic rap but with some 80s pop thrown in for extra measure, which in turn creates one of the most bizzare, yet captivating releases of the year.

When child star Willow Smith made her musical debut at just 10 years of age with guilty pleasure Whip My Hair (we know you still love it, don’t lie), no one could have predicted an album like WILLOW would eventually emerge. Dreamy, experimental and full of #vibes, the eight-track release rejects the mainstream pop route everyone expected Willow to take and sees her attempt to find her own identity away from her parents’ fame. It even has a guest appearance from brother Jaden. DM

Keep up to date with all the best new tracks by LGBTQ artists by adding GAY TIMES’ Queer & Now playlist on Apple Music to your library: