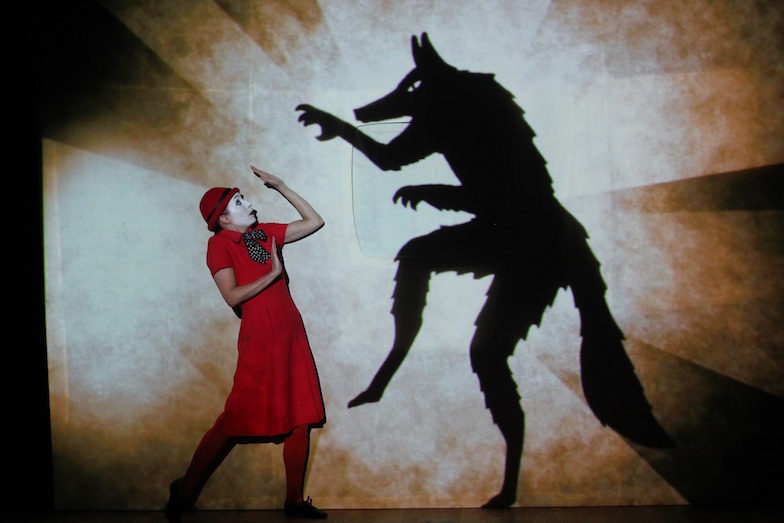 Written and directed by Suzanne Andrade, 1927’s show has opened at the Lyric Theatre in Hammersmith.

The Animals and Children Took to the Streets is one of the most unique shows we’ve had the pleasure of seeing. It has the look and feel of a graphic novel adapted for the stage; the set is literally a blank canvas, brought to life with some clever use of projection and animated sequences. Tim Burton-esque landscapes unfold in the background as the trio of actors treat the audience to a wonderfully dark and witty story, told through cabaret, mime, and a seamless blend of live and pre-recorded action.

The play is set in the Bayou mansions, a stinking, sprawling tenement block full of curtain-twitchers and peeping toms, and overrun by unruly children. It tells the tale of Agnes Eve and her daughter Evie who, having read some awful stories about the mansions, take it upon themselves to move in and make a difference by setting up some wholesome activities for the residents. When Evie becomes wrapped up in the mayor’s sinister plan to kidnap and sedate the problem children, it’s up to the Bayou mansion’s caretaker to save the day.

The caretaker is the unlikely hero of the show here. With a quirky Edward Scissorhands aesthetic, he never speaks, although we hear his inner monologue through a series of recordings. His bleak, realistic outlook on life is full of hilarious observations, as he struggles with a variety of menial problems including redeeming a voucher for a pair of cinema tickets when he’s on his own, or the cost of a train ticket when he hasn’t had an opportunity to book in advance. His refreshingly honest – if gloomy – outlook made us warm to him, although all the characters were interesting in their own way.

There’s plenty here to enjoy. We’re aware the particular brand of dark comedy and the sinister world which this play inhabits won’t have universal appeal, but we found it to be a wonderfully creepy and truly unusual experience. The trio of talented actors all turned in commendable performances and the technical elements impressed throughout. The Animals and Children Took to the Streets is a memorable, quirky and unique production – one we’re happy to recommend.

Gay Times gives The Animals and Children Took to the Street – ★★★★☆