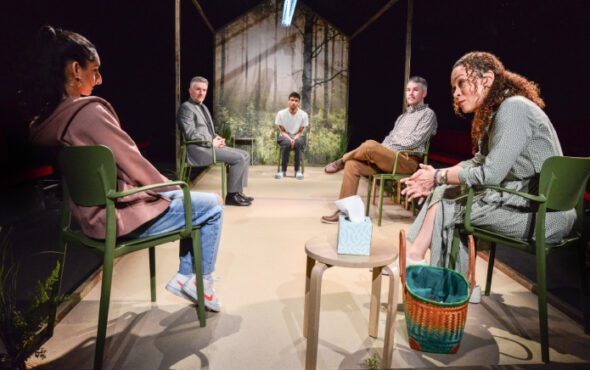 We weren’t quite sure what to expect from new show The Animal Kingdom, the second play from Ruby Thomas. Directed by Lucy Morrison and opening at the tiny downstairs space at The Hampstead Theatre, it tells the story of Sam (Ragevan Vasan) who is struggling, and his family don’t understand him – but then they barely understand themselves, or each other. Set in a stuffy inpatient clinic, over the course of 80 minutes we see Sam undergo various sessions of family therapy, which are facilitated by Daniel (Paul Keating).

We learn a lot about our characters over the course of the play. It’s established pretty early on that Sam is queer and has a history of self-harm which we assume is related to bullying at school and his parents’ divorce, which his family are quick to point towards as causes of his issues – but gradually we learn more about Sam and the rest of the family, unpacking a number of events in their history which have gone unspoken about and as a result no-one has really processed. The resulting play is a smart consideration of several topical issues including queerness, identity and mental health. It’s well-observed and really is one of those shows that truly reveals itself the further into proceedings we progress. Many of the assumptions we made during the opening scenes proved wrong as we gained further insights in everybody’s backgrounds. It’s a play that really challenges its audience to consider carefully and critically the information we’re presented with at each stage of the show. There’s also a warmth and humanity to events, too – while the subject matter may be on the challenging side, there are some hilarious throwaway lines which feel completely authentic and natural.

We were thoroughly impressed with The Animal Kingdom – it’s a brief show, over and done with in 80 minutes without an interval – but it offers an interesting snapshot of a family trying to work out how to cope with a lot of very interesting and relatable issues. We warmed to the family over the course of the evening – testament to the stellar acting performances on display here – and were caught off guard numerous times by several unexpectedly hilarious punchlines. Well worth a visit.