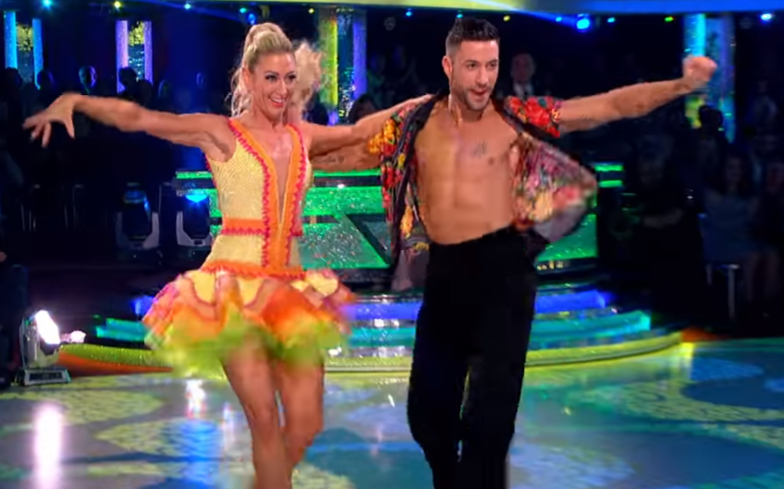 If this is what the celebs can do in the semi-final, I cannot wait for the final.

It’s still hard to believe that this series of Strictly started twelve weeks ago, my how time flies when you’re swept up in the whole spectacle. And this semi-final proved that after all of these weeks, the celebs can still really sweep you away in the performance.

Even some of the lower scored dances this time around where still absolutely stunning, with Joe Sugg’s Viennese waltz being one of the prime examples. And after a bit of a disappointing Musicals Week, it was just the antidote that was needed.

And last week, it was Charles Venn’s final dance, and it wasn’t that surprising. Charles had already been in the bottom two several times, and given Ashley Roberts’s general unpopularity it really wasn’t surprising to see her knock him out.

And when it came to last week’s poll, it was a wash-out for Faye Tozer, as her mesmerising charleston landed her 56% of the vote. The closest dancer after that was Joe Sugg’s massive rainbow salsa on 15%.

Last night’s show started off with Stacey Dooley’s charleston, and o.m.g. that dance should’ve been closing the whole show. She captured everything that the dance is about and she danced it precisely as a flapper would have done back in the 1920s. If ever there was a dance that deserved a perfect 40, this one is definitely it.

And perhaps I was still spellbound by Stacey’s dance, as I didn’t find Joe’s Viennese waltz to be that bad. Yes, it definitely had a lot of rise and fall, and yet it didn’t lost the story aspect of the dance, and I was still swept away by the whole romance of it. I can see where Craig is coming from, but this dance deserved to be in the 30s.

Unfortunately, there always the bit in the show, especially at 90 minutes long, that you find just a little uninspired and that was with Ashley’s paso doble and Lauren Steadman’s tango. Although both dances were nice to watch and provided plenty of great moves, they just felt a little lacking, and I wasn’t as interested in them as I was with the others.

But Faye Tozer’s samba rescued me from that, as it had plenty to look at, and not just the obvious thing, and it was so much fun to watch, and again not for the obvious. Her technique was incredible, the song was reasonably catchy, and it felt like you were in Rio watching it.

And getting into the second half of the show, it did seem a little strange that some celebs weren’t playing to their strengths for their final chance to win people over. Both Stacey and Lauren delivered a weaker performance, and this was so much more evident in Lauren who should’ve been ending her dances with the ballroom as that is her stronger point.

Stacey’s Viennese waltz was another beauty to watch, but I have to side with Craig that at the start of the routine it didn’t look or feel like I wanted a Viennese waltz to do. I wouldn’t go as so far to imply cheating on their side, but a bit more Viennese waltz would’ve been nice to see.

Meanwhile, I wasn’t feeling Joe Sugg’s Argentine tango. It looked a little locked in place, and didn’t flow as well as I wanted it to. It’s a shame because I thought he might be able to do this dance well, but given his chemistry with Dianne perhaps it would’ve been better for the pair to do a rumba instead.

But Ashley’s American Smooth did save her from a bit of a mundane night, as the dance was simply incredible. Some of the lifts that the pair pulled off were simply incredible, and showed why she is often at the top of the leaderboard. Pure class for that routine.

The same can’t be said for Lauren who did fumble her way through that samba. She gave it her best shot, but when Latin isn’t her strong point, it’s not surprising to see her move so awkwardly. At least she’ll still have memories from last week’s American smooth which was incredible.

And Faye finally gave us the Argentine tango that we had been waiting for all series. She moved effortlessly, and Giovanni looked like he could move her like a knife through butter. Their dance was hypnotic and by far and away the best Argentine tango of the series, although to be fair that’s not really saying a whole lot.

Unfortunately, I was out when it came to voting, but I had I not been, then I would’ve voted for Stacey and Kevin. I can forgive the opening part of their Viennese waltz, and their charleston was just out of this world. Never has an opening dance to a Strictly show stayed with me so long. And you can watch Stacey’s charleston and Faye rescue the Argentine tango from a series of poor routines below.

I can see AJ missing out on the Strictly finals for the third year in a row here, although I still maintain that him and Claudia from his first year should’ve been in that final. Lauren’s only real hope is that Joe joins her in the bottom two, as her tango was ranked higher than both of his dances, but even so any mistake and she’s likely getting the chop. Although Lauren’s only hope is Joe, his army of fans will likely get him through, and so it honestly wouldn’t surprise me to see Ashley in the dance-off yet again.

But who was your favourite dancer last night? Let us know in our poll below.