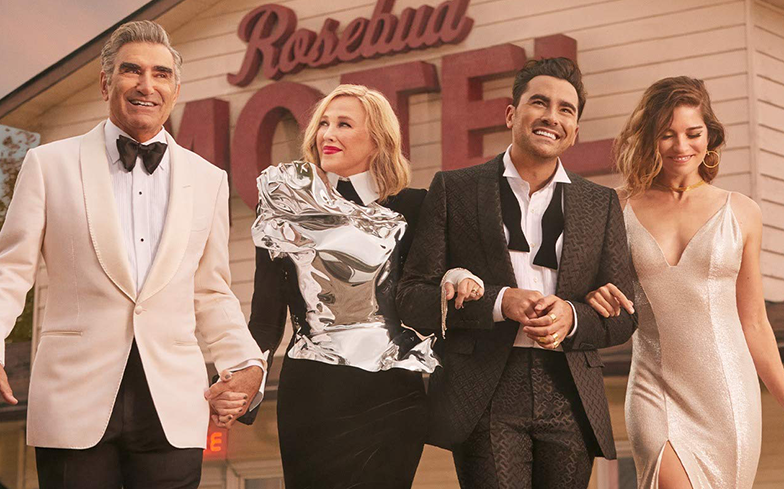 It’s the end of the road for the Rose clan.

It doesn’t feel real saying this, but after six stunning seasons, Schitt’s Creek – one of the greatest television comedies in history (it’s not up for debate) – came to a bittersweet end this week.

The emotional series finale presented an end of the world-esque scenario for David (Dan Levy) when his much-anticipated wedding day to Patrick (Noah Reid) clashed with a torrential downpour, resulting in Johnny (Eugene Levy) and Stevie (Emily Hampshire) enlisting the townsfolk to rally together and save the day.

It was a perfect send-off for the beloved Canadian comedy. The last half hour boasted another instantly iconic, Pope-inspired ensemble from Moira (Catherine O’Hara), one more hilarious, soon-to-be memeable mishap from Alexis (Annie Murphy) and a happy ending (or two) for David.

“Working with this brilliant cast and crew and basking in the glow of their extraordinary talent for six amazing seasons are what I’m going to miss the most,” creator and star Dan Levy wrote in a statement. “We built a family on those sets and it’s reassuring to know that time won’t ever change that. I love you guys more than you will ever know.” (Tears are flowing.)

We’ve rounded up five of the best moments from the sensational Schitt’s Creek finale that we’re sure will be remembered in the hearts of fans for years to come. If you can avoid bawling your eyes out (again), we applaud you.

“You are shockingly calm for David Rose on his wedding day.”

To relieve David of his wedding day stress, Patrick books him a massage in their apartment while he arranges a new venue. To his shock, and the excitement of Stevie, David reveals that the masseuse provided him with a rub and a tug. “Did you have to pay extra for that?” David says, completely and totally… satisfied. A bewildered Patrick replies: “I didn’t pay for a happy ending, I paid for a massage. He gave you a happy ending? On our wedding day?! At no point was that ever discussed, all I did was leave an envelope full of cash and a note that said to “take very good care” of you.” He then realises his mistake, but the soon-to-be newlyweds get over the incident quite quickly. It was a final reminder of how unbreakable their bond is, that a meaningless “happy ending” isn’t enough to tear them apart.

“This is not a wedding dress, it’s a white floral length gown. It’s very different!”

In classic Alexis Rose fashion, she unintentionally sabotages David’s nuptials when she dons an all-white, bridal-looking ensemble. “What is that?” shouts David, to which an oblivious Alexis responds: “Thank you David, you look very expensive and gorgeous too.” Following a short back-and-forth over her non-wedding dress, Alexis hits back: “This is not a wedding dress, it’s a white floral length gown. It’s very different!” After asking if it came with a veil, she replies: “No, it came with a headdress. It came with like, a white… tool headdress, but I thought it overwhelmed the dress so I decided not to wear it!” (We are going to miss these two so much.) Before the critically-acclaimed A Little Bit Alexis songstress walks David down the aisle, she admits her mistake. “I’ve been thinking a lot about it, and I think you’re right,” she tells her brother. “Like, I think I’m wearing a wedding dress. I really wanted to impress you today, and now I feel like I’m ruining your wedding.” Her confession leads to the most heartwarming moment between them both in all six seasons of the show, in which David admits to being “continually impressed” by Alexis. Her reaction… we sobbed.

“Our lives are little baby crows carried upon a curious wind.”

Catherine O’Hara’s portrayal of Moira Rose has catapulted the character into gay icon status thanks to her Met Gala-worthy looks and plethora of colourful wigs that could rival the collection of some of the greatest RuPaul’s Drag Race legends. This episode was no exception. Taking on the role of minister, Moira leaves her fellow townsfolk gagged for the last time when she enters the hall in a remarkable Pope-inspired ensemble, and in tears, due to her heartfelt speech. The future Oscar-winning star of The Crows Have Eyes 3: The Crowening proclaims: “Welcome to the marriage of Patrick Brewer… and David. David RAWS. We are gathered here today to celebrate the love between two people, whose lives were ostensibly brought together by the fate flap of a butterfly wing. It is all but impossible to explain why things happen the way they do. Our lives are little baby crows carried upon a curious wind, and all we can wish for our families, for those we love, is that wind will eventually place us on solid ground, and I believe it has done just that for my family in this little town in the middle of nowhere. And now I will ask David Rose and Patrick Brewer to exchange their vows.”

Always Be My Baby

Remember when Patrick sang Tina Turner’s Simply the Best to David in their store and left us (and Catherine O’Hara) sobbing? Yeah, what a moment. Patrick provides a sequel to that iconic scene in the finale with another rendition of a romantic pop anthem, Always Be My Baby by Mariah Carey, as they exchange vows. There was no shortage of tears, especially from Stevie. (Prepare for sales of the Mariah classic to soar.) David then tells Patrick that he never feels safer than when he’s with him, and has never known love like he knows now. He concludes his speech by reminding Patrick that he’s his real “happy ending”. And just like that, our favourite Canadian queers characters are married.

Schitt’s Creek: Where Everyone Fits In

The next morning, Alexis, David, Patrick and Stevie line up outside the Rosebud motel to bid farewell to Moira and Johnny. Again, it’s an absolute tearjerker. The characters are sad, of course, but you can feel the emotion from the actors as well. These are real tears. Following an emotional goodbye, the matriarch and patriarch of the Rose family set off to California, but not before Johnny catches a glimpse at the barbaric Schitt’s Creek sign for the very last time. There, he discovers Roland’s parting gift to the family. Instead of the painting depicting a brother and sister performing questionable acts on each other in the creek, they have been replaced by Johnny and Moira as David and Alexis wave from afar. Yep, you guessed it: tears. Johnny smiles at the sign, rolls up his windows and tells the driver to continue on their journey. What a perfect ending my bebé’s.

Related: Dan Levy reveals if the season six finale is really the end of Schitt’s Creek.