The 13 greatest American Horror Story characters of all time, ranked 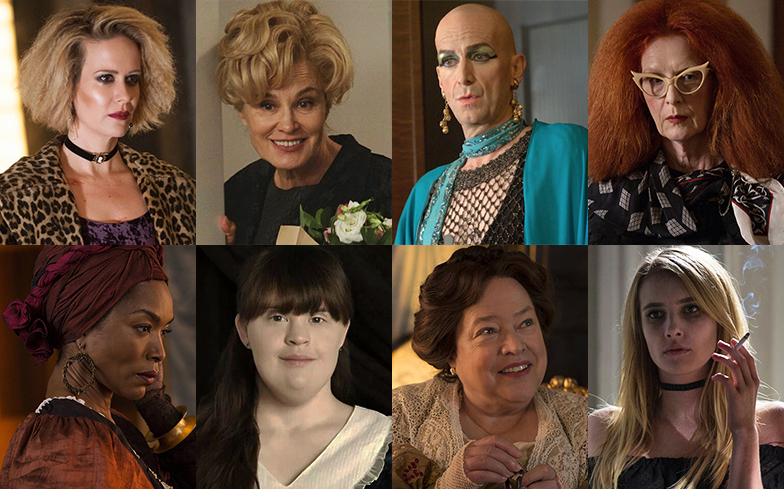 Which iconic American Horror Story character comes out on top?

Ryan Murphy’s hit anthology horror series has become on the most beloved and critically-acclaimed shows of the 21st century, particularly among the LGBTQ community, inspiring fervent debate among fans about their favourite season or character.

As season nine, 1984, races along to its conclusion – which we’re sure will be full of twists and turns – we’ve ranked the 13 best characters to emerge from the show so far. And who knows, when 1984 finishes, we might have a new addition…

But the real question is: How many times can we feature Jessica Lange and Sarah Paulson on one list?

It’s a testament to Sarah Paulson’s acting ability that she can play a character so far removed from her other roles, and do it so damn well. Sally McKenna, known as Hypodermic Sally, is a ghost who died at the Hotel Cortez in 1994 and has been a permanent resident ever since. She was a drug dealer, a heroin addict, and had major abandonment issues. Talk about layers. Up until this point, all of Sarah’s characters had been fundamentally good people, so seeing her sink her teeth into someone entirely lacking a moral compass was a rare treat. Hotel may not be the most loved season of American Horror Story, but as always, Sarah’s performance was a standout.

While scene stealers like Madison Montgomery and Fiona Goode often receive the most attention from fans when it comes to Coven discussions, we’ve always rooted for Nan. After playing Constance’s socially awkward daughter Adelaide character on Murder House, actress Jamie Brewer returned for an empowering role as a witch with the power of clairvoyance. She spent most of the season acting as a mediator for the drama at Miss Robichaux’s Academy for Exceptional Young Ladies, but when her crush Luke is killed by his own mother, an enraged Nan takes revenge by forcing her to drink bleach with the power of her mind. It’s a horrifying scene, but also a total boss bitch move. Fans were devastated when she was killed off, but we later found out during an all-too-brief appearance in Apocalypse that she’s actually having fun causing trouble in hell. We stan.

Lily Rabe is one of American Horror Story’s secret weapons. Her characters are often overlooked, but are always a joy to watch – for example, she played a sex worker-turned-serial killer in Hotel and a nun possessed by The Devil in Asylum. But it was her role as ethereal, animal-loving swamp witch Misty Day in Coven that left the biggest impression on fans. Whether she was bringing our favourite characters back from the dead or dancing with Fleetwood Mac’s Stevie Nicks, her pure nature and positive outlook on life was infectious. Which is precisely why her fate at the end of Coven – an eternity in her own personal Hell, constantly reliving the moment she’s forced to dissect a frog at school – caused the biggest outrage American Horror Story history. Thankfully, years later, Apocalypse fixed that and she got her happy ending.

Fashion icon. Keeper of secrets. Connoisseur of oversized earrings. Liz Taylor, the trans bartender at the Hotel Cortez, is many things, but most importantly she’s a firm fan favourite. She also got to live out the ultimate queer dream, as Lady Gaga herself (in character as The Countess) gave her a makeover, christened her with a new name, and in a later scene murdered her bigoted attackers. Unlike most murders on the show, Liz’s was actually a happy occasion, as she was able to live (well, sorta) on forever as a ghost in the hotel with her friends and dead lover Tristan.

If anyone could challenge Fiona Goode’s title as the baddest witch from American Horror Story, it’s her daughter – and reigning supreme – Cordelia Goode. She first appeared in Coven, one of the show’s most divisive seasons; some loved the camp, Mean Girls-style humour while others lamented its lack of true horror. The one thing that united everyone, though, was that Cordelia was a pure-hearted bad-ass. Remember that time she stabbed herself in the eyes so she could get her visions back and protect the coven? Iconic. You only need to look at the fan reaction to her comeback in Apocalypse to understand how beloved she is. She also took on the anti-christ and helped save the world, which is pretty damn cool.

Out of all of Jessica Lange’s characters on the series, Sister Jude experiences the biggest transformation. At the start of the season, Sister Jude is portrayed as the stern head nun of Briarcliff who aims to make the asylum a model institution to atone for her past sins. Despite her initial cold demeanour, Sister Jude is shown as compassionate to the inmates, and eventually makes it her duty to stop the inhumane acts happening at the asylum. Because of this, she’s admitted as a patient and forms a bond with Evan Peters’ character Kit, which is without a doubt one of the most heartwarming relationships on the series. That final scene never fails to make us sob, honestly. She also provided us with one of the most iconic musical numbers on television: The Name Game, which didn’t win any Grammys. Utter blasphemy.

Kathy Bates gave a career-high performance as historical figure Madame Delphine LaLaurie, the ultimate ‘love to hate’ character. To the public, she was a wealthy New Orleans socialite with a penchant for throwing elegant parties, but behind closed doors, she tortured her black slaves and used their pancreases to create a beauty balm that she believed would make her look young enough to prevent her unfaithful husband from cheating on her. While these scenes were hard to watch, even by American Horror Story’s standards, viewers got to enjoy Delphine’s downfall as she was later forced to become a maid at Miss Robichaux’s Academy, had her head severed by Marie Laveau (but carried on living due to her immortality), and was eventually sentenced to a lifetime in Hell being tortured alongside her children – where she remains years later, as we saw in Apocalypse. But perhaps best of all was seeing her reaction to Obama becoming president.

Constance Langdon is the original bad bitch of American Horror Story, so much so they brought her back for the eighth season for a special guest appearance, and when she was announced to return, the internet broke. Why? Constance introduced Jessica Lange to a brand new audience, ultimately winning her a Primetime Emmy Award, a Golden Globe Award, and the Screen Actors Guild Award back in 2012. She’s also one of the most quotable characters in television history. We’ve all used that gif of her sliding down the wall in agony, haven’t we? Even though her character was a cold-blooded murderer who raised a serial killer son, she was extremely likeable. She raised the anti-christ and still had time to plant her garden. What a queen!

Frances Conroy has played some of the most interesting characters in American Horror Story history, but has criminally never been given a starring role. The closest she’s come is with Myrtle Snow, who deserves her place on this list for her iconic “Balenciagaaa!” death scene alone. Visually, no one else on the show holds a candle to Myrtle, and she even gives fellow Coven favourite Madison a run for her money with her witty retorts. As Head of the Witches’ Council, she’s one of the most dedicated and loyal characters in a world full of backstabbing and betrayal, and her quirky nature has won her a legion of fans. Not to mention those glasses.

When it comes to gay icons of American Horror Story, there’s no denying that Madison Montgomery is number one. The role saw actress Emma Roberts do what Emma Roberts does best – playing a cold-hearted bitch with a superior fashion sense and some of the most memorable one-liners in television history. Ryan Murphy knew what he was doing when he made former movie star-turned-witch Madison, and queer viewers ate it up. She made a welcome comeback in Apocalypse – where she once again uttered her infamous line, “Bet you thought you’d seen the last of me” – and fans are already calling on her to return once again in current season 1984. We’re keeping our fingers crossed.

Sarah got her chance to take on the lead role in the American Horror Story’s second season, Asylum, and boy did she deliver. In a performance of a lifetime, Sarah portrayed Lana Winters, a strong-willed journalist who is wrongly committed to Briarcliff Manor asylum for trying to expose the mistreatment and torture that occurs there. She’s one of the strongest characters to come out of the show; not only is she working in a male-dominated field in the mid-60s, she’s also a lesbian, and has to hide her relationship for fear of repercussion. She suffered kidnap, rape, had to kill her own son, and yet she never gave in to her oppressors. It’s no surprise that she’s a favourite among LGBTQ viewers. Lana reappeared at the end of season six, Roanoke, and we’re keeping our fingers crossed that we see her again in the future.

Is there any American Horror Story character more bad-ass than Marie Laveau? The iconic Voodoo Queen and self-declared HBIC (Head Bitch In Charge) began Coven as an enemy of the witches, but eventually teamed up with then-reigning supreme Fiona Goode to form one of the most iconic duos in television history – who could forget that deadly negotiation scene with the witch hunters? She made a short-but-sweet return from Hell in Apocalypse’s final moments – without a doubt the most gag-worthy moment of the season – and played her part in saving the world from eternal doom. There’s only one character who deserves the top spot more than her…

Fiona Goode is not only Jessica Lange’s best character on American Horror Story, she’s the best character on American Horror Story, period. The Supreme witch of her generation, Fiona returns to Miss Robichaux’s Academy following the murder of Misty Day to reconcile with her daughter, Cordelia, and to teach the students how to defend themselves against demons, evil-dwellers and all that. She’s a fantastic character because she has, by far, the wittiest dialogue of any AHS character, and is without a doubt, one of the most powerful, cut-throat witches in fiction. Fiona’s a favourite among queer fans of the show, and we can see why they relate – she’s constantly on the hunt for immortality, has a penchant for bad boys (in this case an axe murderer), and most importantly she takes nonsense from no one. The scene where she telekinetically blasts Madison Montgomery against the wall without batting an eye? Oh, honey. The show has had a gaping hole ever since Jessica Lange quit, and if there’s one role we’d love to see her reprise, it’s Fiona Goode. Make it happen, Ryan Murphy.