The 10 best LGBTQ television shows of the decade 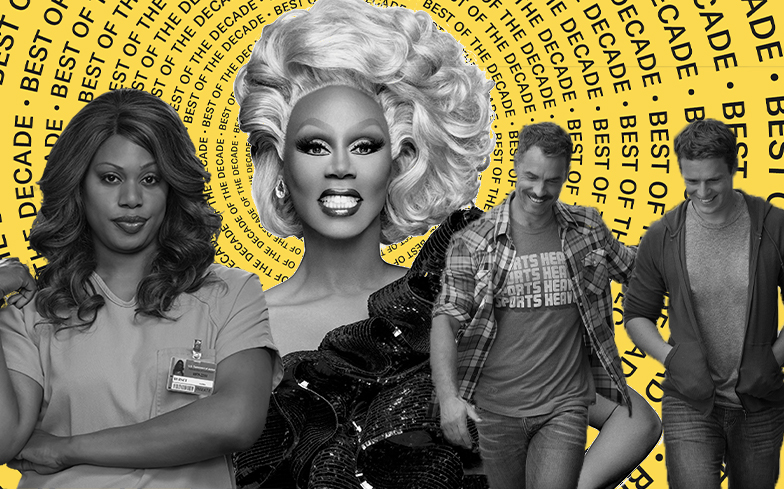 This decade has brought us more queer stories on the little screen than ever before.

We don’t need to remind you the importance and impact proper queer representation on television can have, and while there are still improvements to be made, the 2010s have brought some incredible LGBTQ stories into the mainstream.

We present the 10 best queer television shows of the decade from Ryan Murphy’s record-breaking drama Pose, to Netflix’s most successful original series Orange is the New Black and the cultural phenomenon that is RuPaul’s Drag Race.

Like Will & Grace, mockumentary sitcom Modern Family has been credited with helping change the perception of gay characters in pop culture. Although the characters of Mitchell (Jesse Tyler Ferguson) and Cameron (Eric Stonestreet) have been critiqued for being ‘stereotypical gays’ due to their flamboyancy (because for some reason, that’s bad), they’ve been lauded by critics as a stepping stone in the fight for marriage equality, which passed in 2015 during the show’s 7th season. In 2016, the show also cast transgender child actor Jackson Millarker, who made history as the first openly transgender child actor on television in Hollywood. Critical acclaim for Modern Family may have fallen in recent years, but there’s no denying the show has been groundbreaking for queer representation.

Created by Russell T Davies, Cucumber follows middle-aged gay man Henry Best (played brilliantly by Vincent Franklin) whose life takes a turn when he decides to call it quits with his partner of nine years, Lance Sullivan (Cyril Nri), after “the worst date night in history”. Like Russell T Davies’ previous gay drama Queer as Folk, Cucumber became a critical darling, receiving a GLAAD Media Award nomination for Outstanding TV Movie or Limited Series. Although the series included gay threesomes, chosen queer families and – of course – Grindr, heterosexual audiences weren’t left out thanks to its universal themes of middle-aged desperation, loneliness and death. In 2015, there were also a few more LGBTQ characters on the smaller screen in comparison to Queer as Folk’s run, but not enough – especially in the UK. Cucumber was explicit, gay as fuck and despite running for just eight episodes, has cemented itself as one of the most groundbreaking British LGBTQ series in history.

The criminally underrated Schitt’s Creek stars Catherine O’Hara, Eugene Levy, Dan Levy and Annie Murphy as the Rose family, wealthy socialites who lose their fortune and have to take refuge in a town they bought as a joke. One of the funniest comedies on television, the series has been lauded for its portrayal of pansexual character David, played ever so brilliantly by Dan Levy. Throughout the series he embarks on relationships with both men and women, which is simply accepted by the other characters with no expressions of homophobia in the storyline. It presents a world in which we should all be able to live. Catherine O’Hara also plays one of her finest characters to date in dramatic, fashion-forward matriarch Moira Rose, star of Sunrise Bay and The Crows Have Eyes 3, and Annie Murphy provides one of the most groundbreaking and revolutionary pop songs of the decade. (Stream A Little Bit Alexis on Apple Music now.)

The first season of Euphoria has just finished airing its debut run to widespread acclaim, with particular praise aimed at the show’s nuanced, queer characters and representation of the modern LGBTQ experience. While each character in Euphoria brings their own individual complexities to the show, the way in which queer people’s identities is examined is particularly groundbreaking because being queer isn’t their main character trait. They have their own battles to fight and their sexuality or gender identity is always shown as secondary to their plight: never the cause of it – especially Jules (Hunter Schafer), who isn’t defined by her transness. Good news, the show has been confirmed for a second season, which is due to premiere sometime in 2020.

Created by trans sisters and filmmakers The Wachowskis – who are most famous for crafting The Matrix and its subsequent sequels – Sense8 was widely praised for its inclusive roster of characters, which includes gay men, a trans woman and a lesbian, along with people from many different cultural backgrounds. The sprawling, inclusive sci-fi drama was cancelled after two seasons, which was met with widespread uproar from fans who tried to convince Netflix to rethink their decision by trending #RenewSense8 on Twitter, and with thousands signing an online petition. Thankfully, all those emails of complaint and petitions (this one got over 500,000 signatures) paid off and in 2017, Lana Wachowski announced that Netflix had commissioned one final special episode to tie things up. Now that… is impact.

Hailed as a modern take on gay-themed dramas (and as the gay version of Sex and the City and Girls), Looking starred Jonathan Groff, Frankie J. Alvarez and Murray Bartlett as three homosexual men in San Francisco; focusing on their trials and tribulations with life and love. The short-lived HBO series was revolutionary in the way it depicted the LGBTQ community. It portrayed gay men as completely ordinary and the sex scenes felt like a political statement at a time when same-sex marriage was illegal. Although the series received heaps of critical acclaim from both critics and the community, Looking was cancelled by HBO after a sharp decline in the ratings. However, with the amount of reboots and revivals occurring in the world of television as of present, we wouldn’t be surprised if Looking came back in a big way next decade.

4. Orange is the New Black

Orange is the New Black has become Netflix’s most watched original series since its debut. Based on Piper Kerman’s memoir of the same name, the critically-acclaimed drama follows several characters in a woman’s prison and was notable for its queer storylines; most notably Laverne Cox’s critically-acclaimed portrayal of trans inmate Sophia Bursett. Her performance resulted in an Emmy nomination for Outstanding Supporting Actress, making her the first transgender person to be nominated for such an award. The show also includes one of the most rooted for lesbian couples of the decade in Piper Chapman (Taylor Schilling) and Alex Vause (Laura Prepon), and one of the most tragic – and heartwarming – stories of the queer experience with Samira Wiley’s character, Poussey Washington.

The first of two Ryan Murphy series on this list, American Horror Story has become one of the most beloved and discussed television shows of the decade. Each year, fans wait with bated breath to find out which classic horror movie trope will be explored – and of course, to see which legendary stars will return. Over the course of nine years, the show has been widely-acclaimed for the performances of stars such as Sarah Paulson, Evan Peters, Angela Bassett, Kathy Bates and Jessica Lange, the latter of which has taken home two Primetime Emmy Awards. AHS has also been praised for its normalisation of the LGBTQ community; each season features several queer characters, most notably Ally Mayfair-Richards (Cult), Liz Taylor (Hotel) and Lana Winters (Asylum), and their sexuality is never an important arc. They’re queer, and that’s that. It’s important to note that the latest season, 1984, made history with the casting of Pose alum Angelica Ross. She became the first female transgender actress to secure two regular roles on television. With a 10th season confirmed, and Murphy expressing desire for 10 more, we’re certain we’ll see all corners of the LGBTQ community represented in some way or another and for queer actors to break even more records.

It’s a testament to Pose’s power that it nearly nabbed the top spot with only 18 episodes. Centring around the ballroom scene in 1980s New York City, the series – created by Ryan Murphy, Brad Falchuk and Stephen Canals – assembles the largest cast and crew of trans actors, producers and writers a drama series has ever seen. As the widespread critical acclaim and numerous Emmy nominations suggest, putting LGBTQ people at the centre of LGBTQ narratives provides the best results. In what will be remembered as one of the most heartbreaking hours of television ever produced, season two episode four of Pose found Candy (Angelica Ross) brutally murdered in a motel room. It highlighted the very real problem of trans women of colour being forced into sex work to survive, and in doing so putting their safety at risk of extreme violence and, in this case, murder. With a few more seasons under its belt, we’re certain Pose will be remembered in the future as the best – and most important – LGBTQ series of the 21st century.

Since 2009, RuPaul’s Drag Race has launched the careers of over 140 drag performers across the world and spawned various spin-off versions in Thailand and the UK, with more to follow in Australia and Canada. Although we love to scream “yas queen!” and “gag!” at the sickening runways and jaw-dropping lip-syncs, the show has undeniably stood the test of time because of how it humanises the queer experience. Throughout the series, contestants such as Monica Beverley Hillz, Peppermint and Sonique have inspired queer youth by coming out as trans, Mercedes Iman Diamond shed light on Islamophobia in the United States, while various other queens have educated heterosexual viewers by revealing homophobic abuse faced at the hands of bullies – even their own family. The show has also inspired other queer people to pursue the art of drag and to live more authentically because, “If you can’t love yourself, how in the hell are you going to love somebody else?” How could Drag Race not be in the top spot?

Get ready for your new favorite LGBTQ+ podcast You Alright Babes?