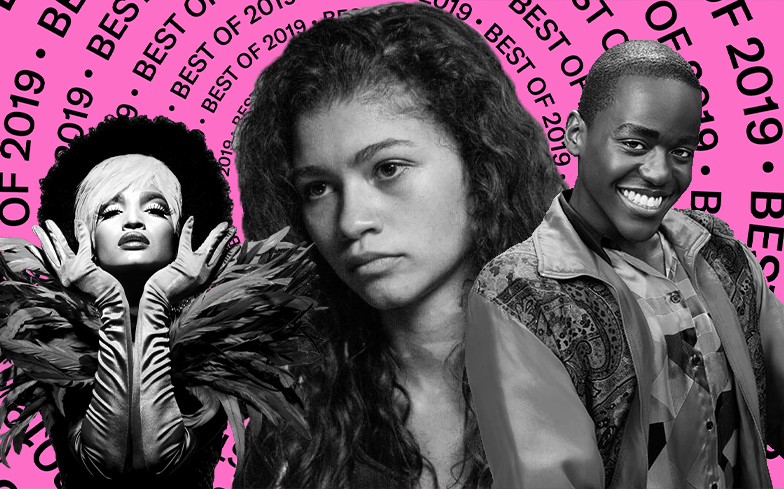 2019 has been a phenomenal year for queer television.

From gritty teen drama Euphoria to the final instalment of prison dramedy Orange is the New Black, and the debut season of RuPaul’s Drag Race UK, this year has undeniably been the best for queer representation on the small screen.

Here we list our Top 10 queer television shows from 2019.

Hailing from the minds of New Queer Cinema legend Gregg Araki and Vogue sex columnist Karley Sciortino, Now Apocalypse follows bisexual protagonist Ulysses (Avan Jogia) and his friends as they pursue love, sex and fame in Los Angeles. The series brought plenty of moments that left LGBTQ viewers screaming; whether it was the endless millennial pop culture references, Tyler Posey giving a handjob in an alleyway or the shirtless scenes from Beau Mirchoff’s dim-witted but loveable character Ford. Despite being one of the most original shows on television, Now Apocalypse was cancelled earlier this year. We’re not over it and we never will be.

Ryan Murphy’s satirical comedy follows Ben Platt’s character Payton Hobart, a wealthy student from California who is determined to become the President of the United States. First, he has to navigate “the most treacherous political landscape of all: Saint Sebastian High School”. It’s stylish, it’s camp, and it features the most iconic quote of the year courtesy of two-time Academy Award-winning actress, legend and icon, Jessica Lange: “I don’t understand why calling that gay man a butt-munch was such a scandal. That’s what gays do: munch butts and celebrate Halloween.” Fans and critics praised the show’s fabulously bitchy Cruel Intentions and Scream Queens-esque style, its commentary on today’s political landscape and its handling of LGBTQ characters – especially James, portrayed by trans non-binary actor Theo Germaine. You’ll be pleased to know that Netflix have commissioned two seasons of the show with five planned, each of which will revolve around a different election that will chronicle Peyton’s rise to power.

Based on creator and star Ryan O’Connell’s part-memoir, part manifesto I’m Special: And Other Lies We Tell Ourselves, Special follows a gay man living with mild cerebral palsy who decides to go after the life he wants – and deserves. Produced by Emmy-winning actor Jim Parsons (The Normal Heart, The Big Bang Theory), Special received universal acclaim upon release and was nominated for three Emmy Awards – including Outstanding Short Form Comedy or Drama Series. In December the series was renewed for an eight-episode second season, which is due to premiere sometime in 2020. When we spoke to Ryan about Special earlier this year, he told us: “I would love to live in a world where everyone is equal and have the same opportunities but aren’t there yet, so until we are I will do my part. I feel vindicated because the story I was telling was a universal one. I hope my show is the tip of a very, very long history of disabled shows. I really hope this is the beginning.”

It’s difficult for any show to maintain momentum in its fifth year, but Schitt’s Creek managed to do the impossible and delivered its finest season so far. The penultimate instalment of the beloved comedy series focused on the Rose family as they finally found their place in Schitt’s Creek; David’s (Dan Levy) apothecary business continued to thrive; Moira (Catherine O’Hara) launched her most artistic endeavour yet with a production of Cabaret; Alexis’ (Annie Murphy) marketing career reached new heights and Johnny (Eugene Levy) managed to improve the reputation of the Rosebud Motel with the assistance of Stevie (Emily Hampshire). Alexis also introduced audiences to her failed yet iconic pop career with the future Grammy-winning dance-pop anthem A Little Bit Alexis, while Patrick (Noah Reid) finally proposed to David in one of the most emotional slash adorable moments from the series to date. Does it have to end? Seriously?

6. Orange is the New Black

After seven seasons, Netflix’s most acclaimed and binge-watched original series came to an end this year. In its final instalment, Piper Chapman (Taylor Schilling) struggles to adapt to life on the outside while the inmates of Litchfield come to terms with the fact that prison has changed them forever. With a focus on immigration, racism and the treatment of imprisoned women, season seven reminded us why Orange is the New Black is/was one of the most authentic and hard-hitting shows on television. The last few seasons of the show arguably declined in quality, but season seven returned to form and ended one of the most legendary series of the decade on a high.

5. Tales of the City

After years of anticipation, Netflix finally released another instalment of fan-favourite queer series Tales of the City earlier this year. Based on the collection of nine classic novels by Armistead Maupin, the original followed Midwest girl Mary Ann Singleton (Laura Linney) as she moved to San Francisco and discovered a world of drugs, disco and homosexuality. When it debuted in 1993, it was widely regarded as one of the first TV shows to fairly represent LGBTQ characters, as it tackled several important issues like coming out, HIV/AIDS, and gender identity. Netflix’s 10-episode revival follows Mary Ann as she returns home to San Francisco, where she is reunited with her daughter (Ellen Page) and ex-husband Brian (Paul Gross) 20 years after leaving them for her career. Recurring cast members included Bob the Drag Queen (RuPaul’s Drag Race) as burlesque club manager Ida Best; Jen Richards (Her Story) as a young Anna Madrigal; and Daniela Vega (A Fantastic Woman) as trans woman Ysela, who plays a pivotal role in Anna’s life. It continued the series’ mission of celebrating the diversity of San Francisco, and was queerer than ever.

After years and years of rumours and anticipation, RuPaul’s Drag Race UK finally launched back in October and honey… sickening, it was absolutely mothertucking sickening YES GAWD! The crass sense-of-humour and references to iconic soaps and dramas, as well as the interactions between the contestants, was a breath of fresh air and resulted in peak British television. It wasn’t Americanised, like we feared. The challenges were more of the same, but the way they were executed? Perfection. Downton Draggy? Future BAFTA winner. Snatch Game? Two of the best celebrity impressions in HERstory thanks to Margaret Thatcher (Baga Chipz) and Donald Trump (The Vivienne). And the Frock Destroyers? Watch out Little Mix, you ain’t safe hennies. Over the course of eight weeks, the series was requested a staggering 10 million times on BBC iPlayer, so its renewal came as a surprise to lit-er-ally no one.

Sex Education became one of Netflix’s most successful shows ever when it premiered early in 2019, garnering over 40 million viewers in its first week of release and receiving high acclaim from both critics and viewers at home, thanks in part to its diverse representation and tackling of sensitive subjects. The coming-of-age dramedy featured many heartwarming moments, genuine educational lessons to be learned, and… banana blowjobs. The show’s highly-anticipated second season will see the arrival of new students – as well as a chlamydia outbreak – at Moordale Secondary, while Eric (Ncuti Gatwa) will explore his new-found confidence after gaining acceptance from his father, and we’ll finally find out what happens to Adam (Connor Swindells) after he was shipped off to military school. Get ready to binge-watch.

The first season of Euphoria has just finished airing its debut run to widespread acclaim, with particular praise aimed at the show’s nuanced, queer characters and representation of the modern LGBTQ experience. While each character in Euphoria brings their own individual complexities to the show, the way in which queer people’s identities is examined is particularly groundbreaking because being queer isn’t their main character trait. They have their own battles to fight and their sexuality or gender identity is always shown as secondary to their plight: never the cause of it – especially Jules (Hunter Schafer), who isn’t defined by her transness. Good news, the show has been confirmed for a second season, which is due to premiere in 2020.

This season of Pose featured one of the most heartbreaking hours of television ever produced. In the fourth episode of season two, Angelica Ross’ breakout character Candy was found brutally murdered in a motel room. Although her death at the hands of cishet man took place in 1990, the killing of trans women – particularly trans women of colour – remains an ongoing issue. Angelica told us earlier this year: “The reaction was overwhelming and I think it’s exactly what the world needed, for something to hit close to home.” The season also continued to showcase the devastating impact of the HIV/AIDS crisis, Angel (Indya Moore) pursued her modelling career while Elektra ricocheted from house to house before forming her own, all while reading basic homophobes for filth. Mj Rodriguez and Billy Porter also provided the performances of their career as Blanca and Pray Tell, with the latter becoming the first openly gay black actor to win the Primetime Emmy Award for Outstanding Lead Actor in a Drama Series. We cannot wait to see what season three will bring.