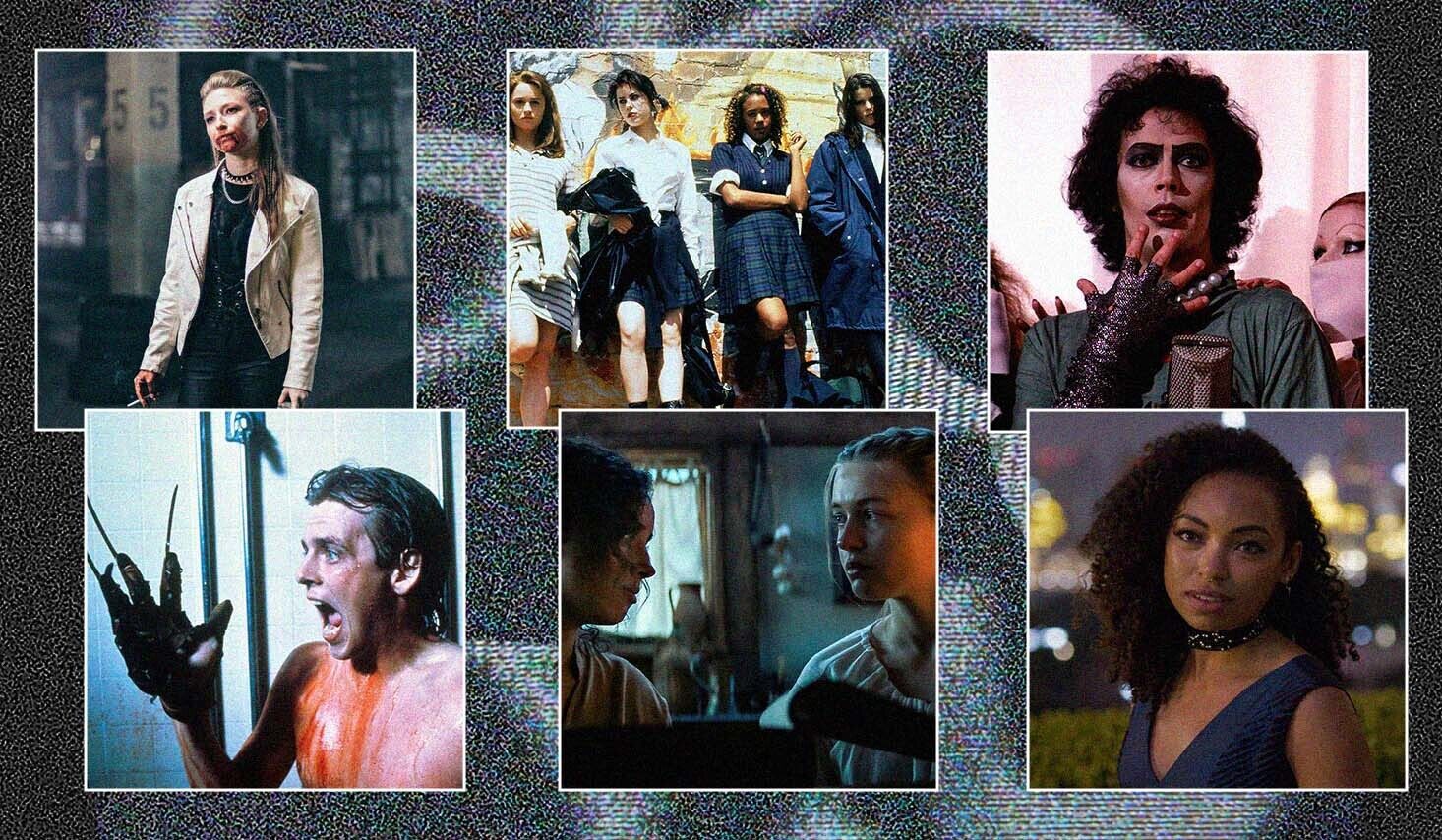 Queerness and horror have always been intertwined. Although queer characters and storylines have notoriously been scarce within horror (until recent), queer audiences have often flocked to monster movies and slashers due to the genre’s exploration (and obsession) with otherness. Whether it’s the questioning of a villain’s humanity, the non-normative characters that don’t conform to societal expectations or the dramatisation of it all, queer elements and queer-coded subtext have always been there. To mark Gay Christmas, aka Halloween, we’ve collected some of the most iconic queer horror movies, from the camp stylings of A Nightmare on Elm Street 2: Freddy’s Revenge, to the trans vampire flick Bit, and of course, The Rocky Horror Picture Show. 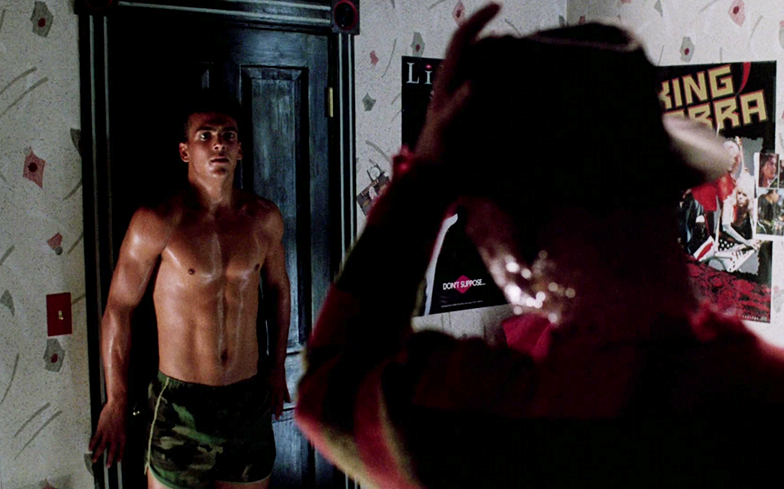 Despite not featuring any openly queer characters, A Nightmare on Elm Street 2: Freddy’s Revenge is one of the campest horror films in history with scenes in leather bars and locker rooms, as well as scenes featuring sweaty shirtless men trying to escape the wrath of Freddy’s perfectly manicured talons (see photo above). Although the film received mixed reviews upon release, the film has become a cult classic and is now a Halloween go-to for the LGBTQ+ community. 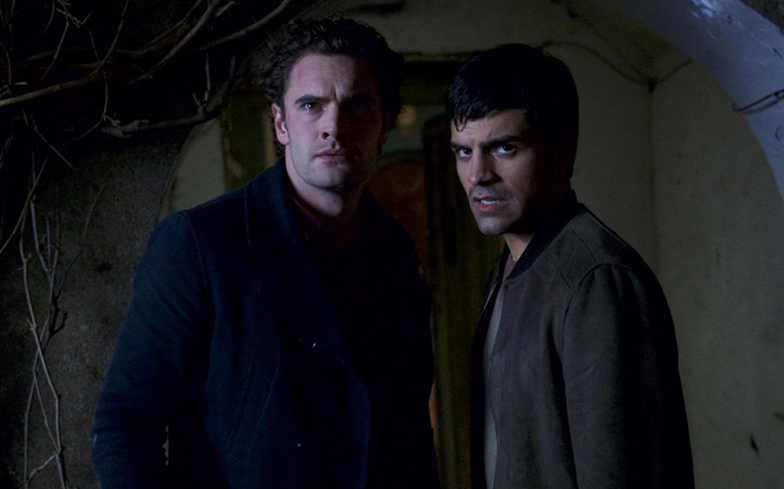 Starring Tom Bateman (Behind Her Eyes) and Sean Beale, B&B focuses on a gay couple who embark on a weekend getaway to a bed and breakfast, the same bed and breakfast they were turned away from the previous year due to the owner’s archaic religious views. Thanks to the arrival of a sinister stranger, their romantic retreat takes a deadly turn… 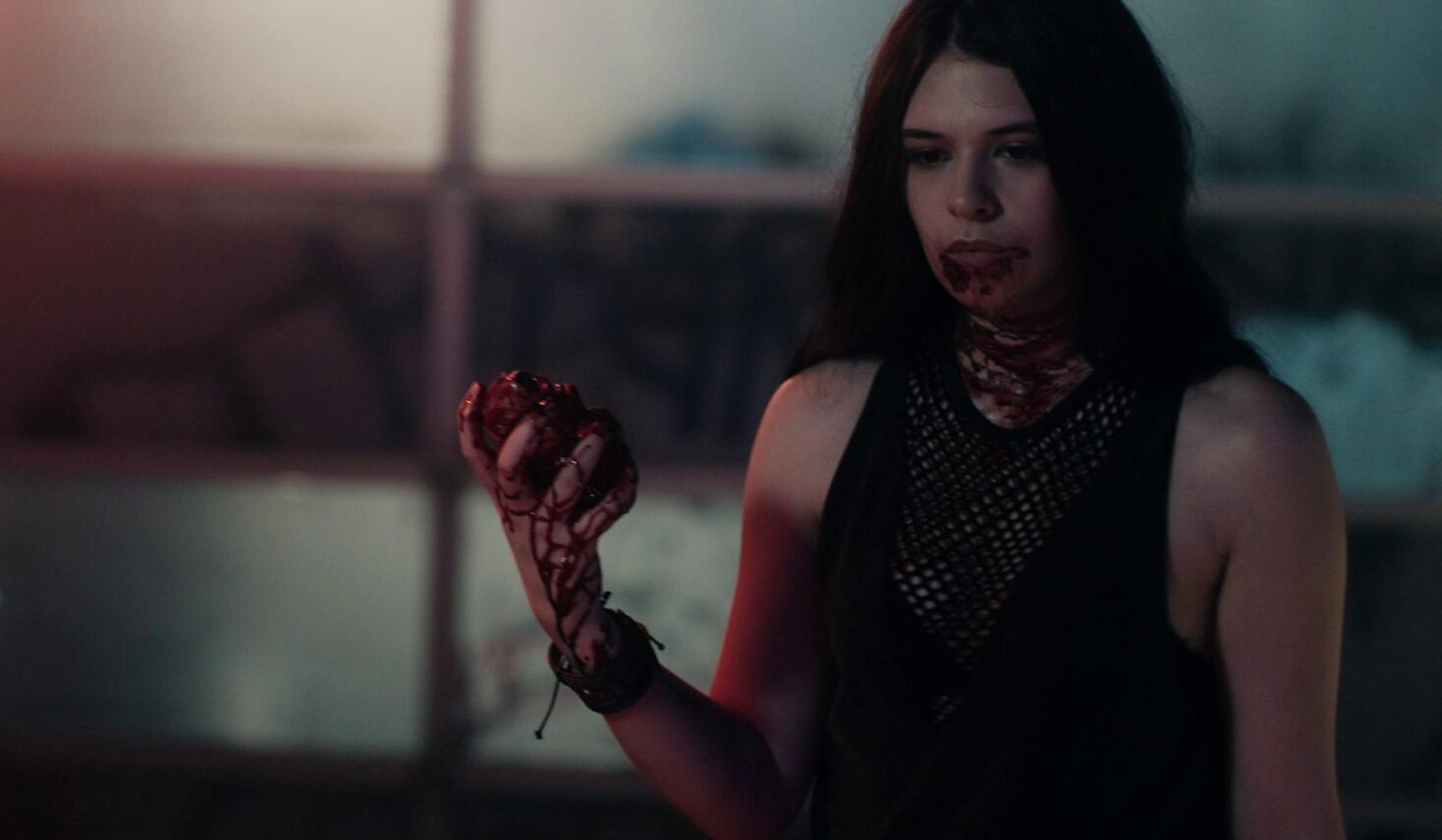 Released to critical acclaim, Bit stars Supergirl’s Nicole Maines as a transgender teenage girl who moves in with her brother (James Paxton) in Los Angeles, looking to make a fresh start after her transition. There, she meets a coven of four queer feminist vampires whose aim is to rid the city’s streets of predatory men. It’s one of the most inclusive LGBTQ+ horrors in recent years, allowing a transgender character to take centre stage without conforming to harmful queer tropes. If you fancy a queer feminist vampire flick, Bit is for you.

The Craft follows a group of four outcast teenage girls with supernatural abilities who pursue witchcraft for their own personal gain. Even though the film isn’t explicitly queer, it has queer undertones. Their coven is reminiscent of a group of LGBTQ+ youth who are coming to terms with their identity. Nancy (Fairuza Balk) feels like your typical unapologetic “out” character, Bonnie (Neve Campbell) is afraid of how her otherness will be perceived by her “normal” peers, Rochelle (Rachel True) is ostracised due to her skin colour and Rachel (Robin Tunney) doesn’t fully understand who she is just yet. In the film, they even go to a witchy part of town which they deem their “safe space”, which we can all relate to. 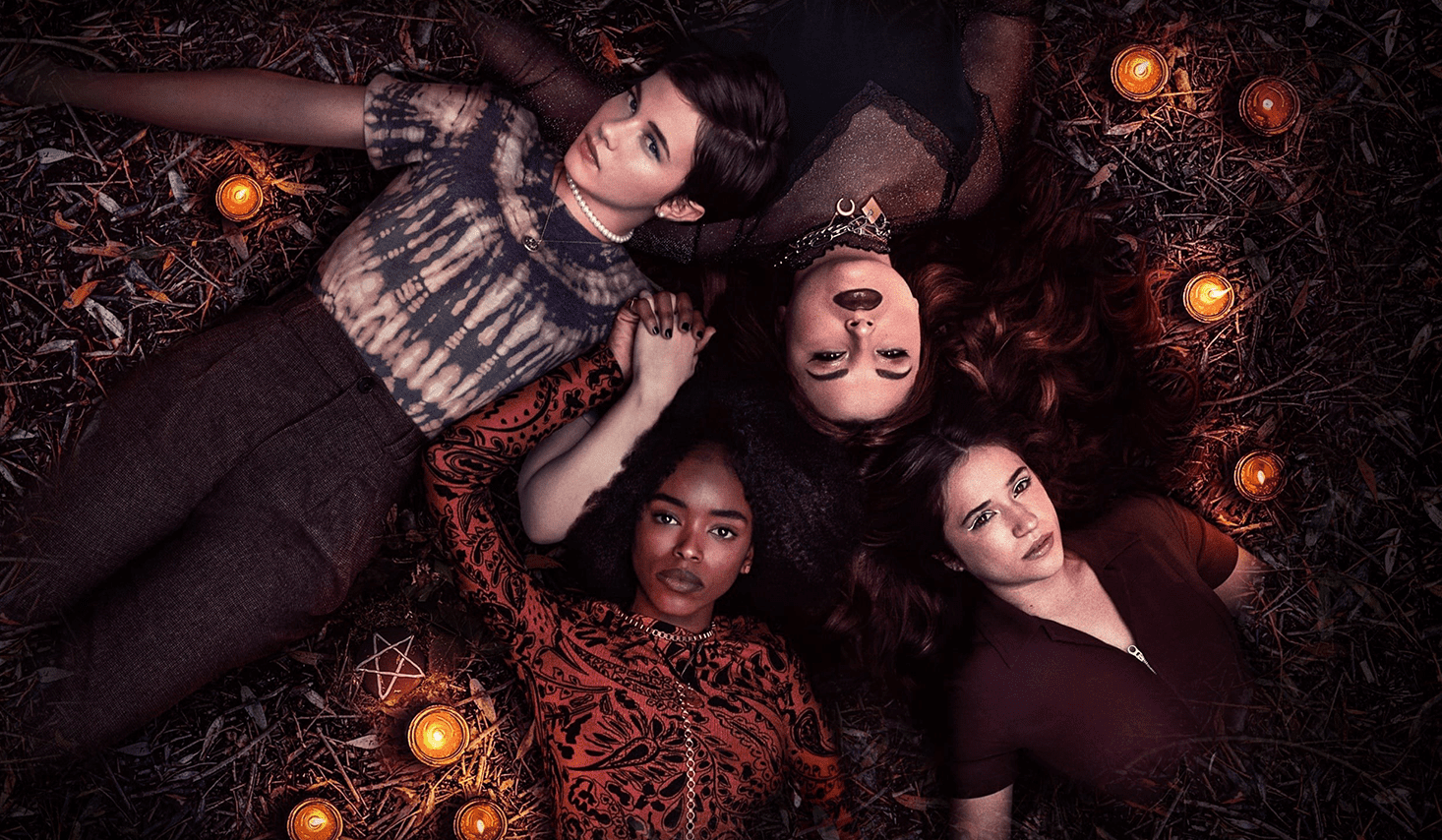 Directed and co-written by Zoe Lister-Jones, the sequel to the above stars Cailee Spaeny (Bad Times at the El Royale), Gideon Adlon (The Society), Lovie Simone (Greenleaf), and Zoey Luna (Pose) as four high school students who dabble in black magic – to disastrous effects, of course! The official synopsis reads: “When starting at a new school, Hannah befriends Tabby, Lourdes, and Frankie and quickly becomes the fourth member of their clique. Hannah soon learns that she somehow brings great power to the quartet.” Although Legacy could have benefitted from an extra half hour runtime, it’s the rare reboot slash revival that manages to successfully pay homage to the original while expanding on its mythology. 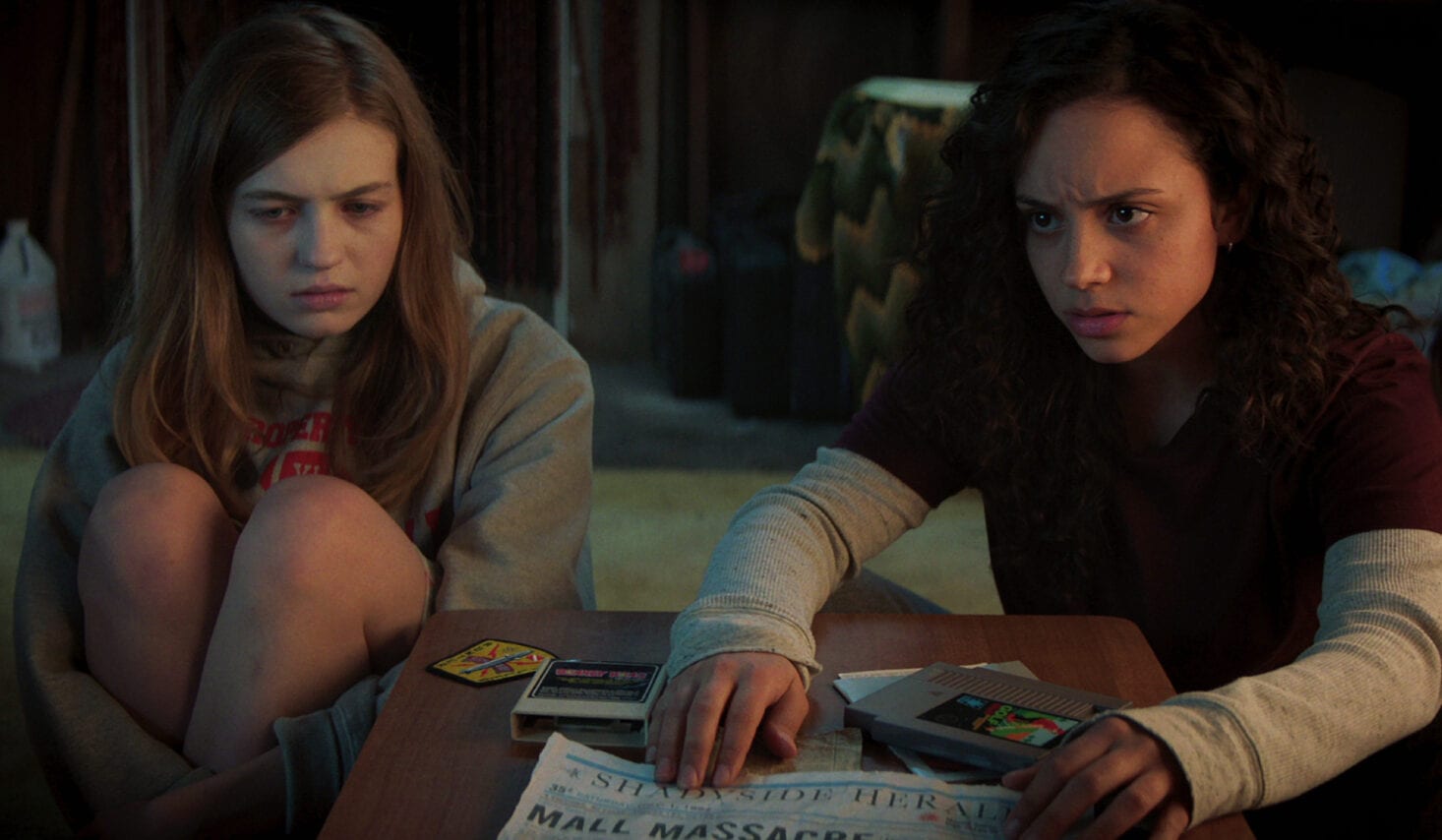 The horror genre received a much-needed queer makeover this year with the arrival of Leigh Janiak’s blockbuster trio of Fear Street films, based on R. L. Stine’s beloved teenage novels of the same name. The fantasy-slashers, released over a span of three weeks on Netflix, stars Kiana Madeira and Olivia Scott Welch as Deena and Sam, star-crossed lesbian lovers who try and break the ancient curse that has doomed their hometown of Shadyside for centuries. While the series has received widespread critical acclaim for its performances, writing and entertainment value, it was ultimately Madeira and Welch’s groundbreaking couple that was singled out for praise by critics and viewers due to the notorious lack of mainstream LGBTQ+ representation in the horror genre. 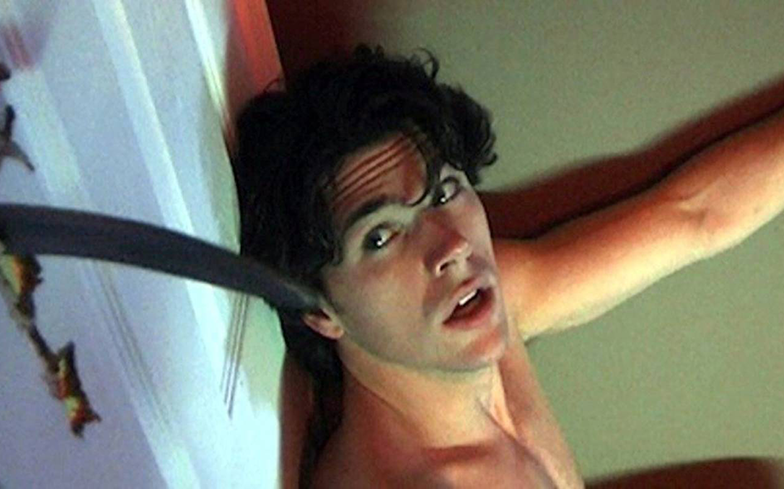 This underrated slasher flick follows a serial killer on a mission to butcher the entire gay community. No, honestly.It first premiered during gay and lesbian film festivals in 2004 and 2005 and has been credited with sparking a wave of “gay slasher” films. For those who love a good slasher movie with a “whodunnit” storyline, you’ll love Hellbent. The characters are fleshed out, the killer is absolutely terrifying, and the suspense… THE SUSPENSE! 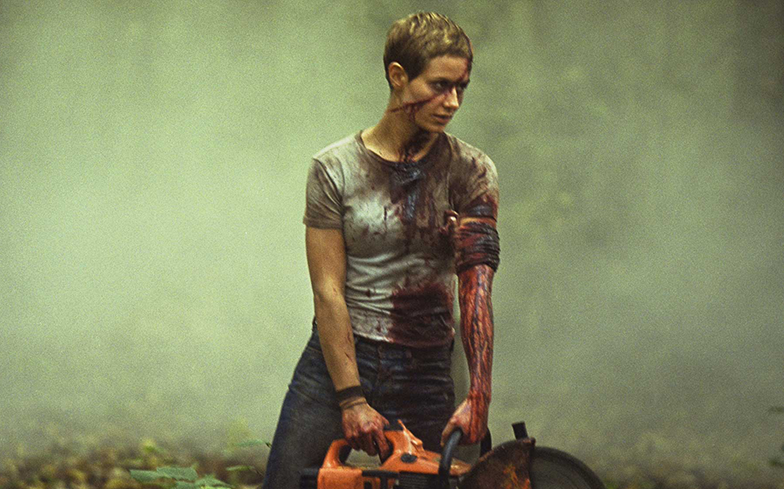 Although it boasts a shite score on Rotten Tomatoes, High Tension is one of the most clever and terrifying slashers of the 21st century. The French film, which is associated with the New French Extremity movement, stars Cécile de France and Maïwenn as two young students who fend off a deranged serial killer at a secluded farmhouse. The film is notable for its queer storyline and bonkers twist, which has since influenced others in the same genre. 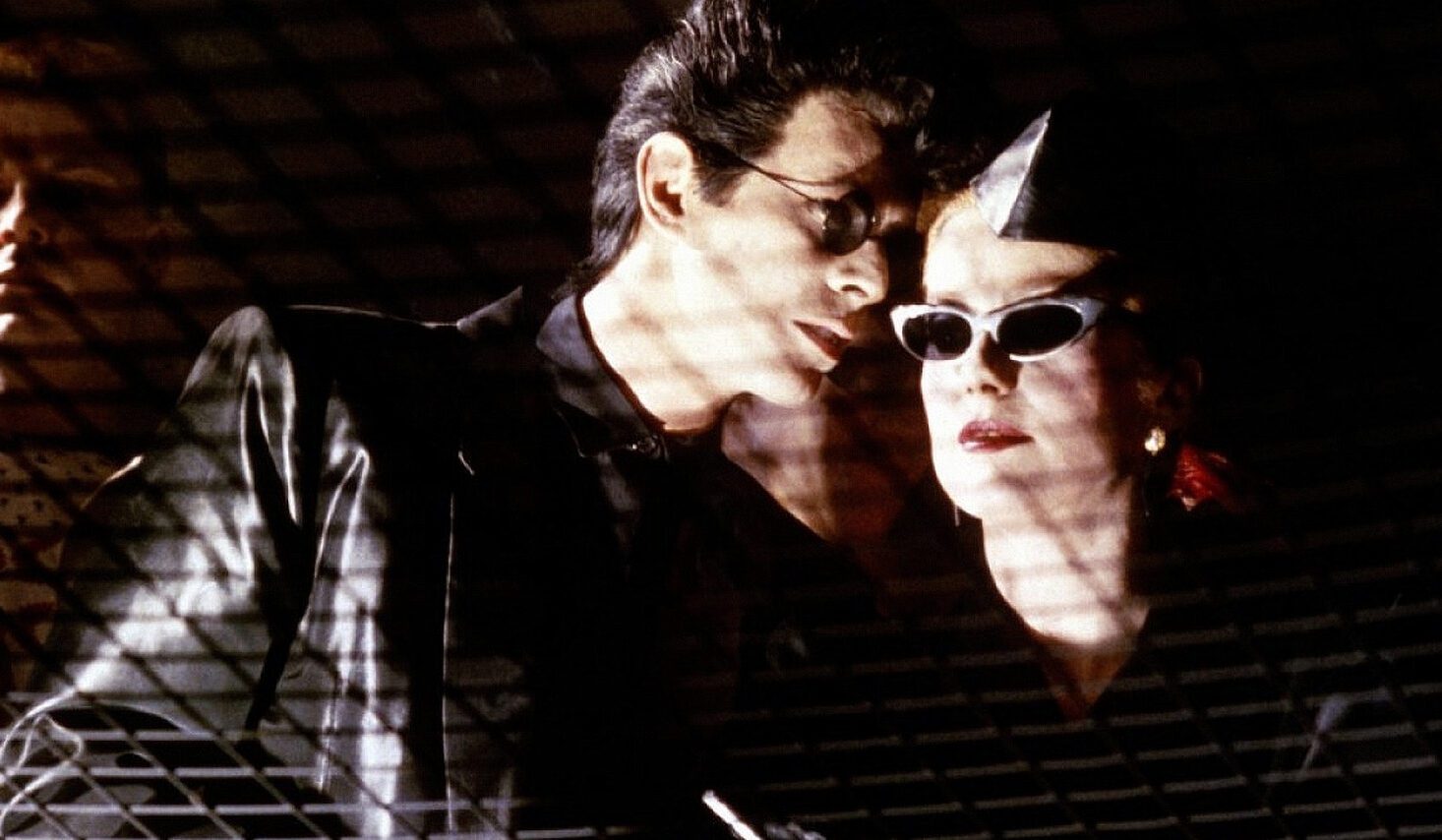 Thanks to its dark and glamorous aesthetic, The Hunger has – like many other films on this list – found a cult following. Oscar winner Susan Sarandon stars as Sarah Roberts, a doctor specialising in sleep and aging research who finds herself entangled in a love triangle with a vampire couple, played by Catherine Deneuve and the late David Bowie. It’s homoerotic as hell and has been cited as a major influence on various works in the Gothic subgenre. 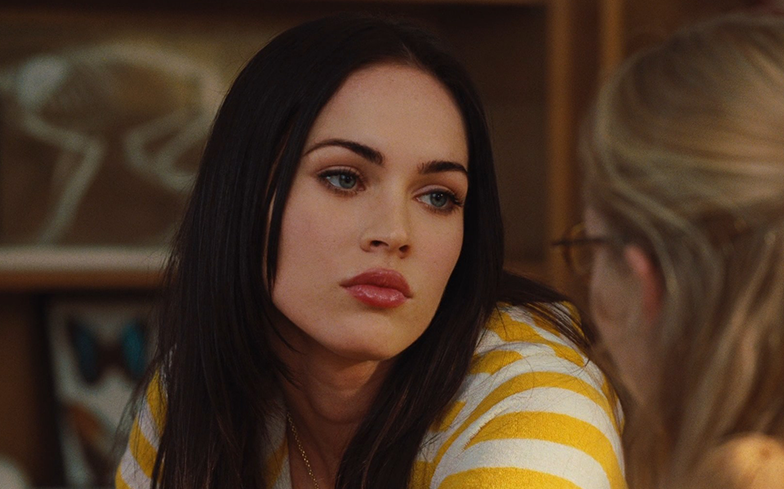 Despite being a box office disappointment, Jennifer’s Body has become a cult classic. The film stars Megan Fox as a popular girl at high school who becomes possessed by a succubus – a demon who seduces men, kills them and devours their flesh etc. There’s a same-sex moment in the film when Jennifer and Needy (Amanda Seyfried), her bff, share a kiss, and their sexual tension is pretty much alluded to all throughout the film. Megan Fox confirmed her character’s sexuality in a 2009 interview with The New York Times, describing Jennifer as a “cannibalistic lesbian cheerleader”. 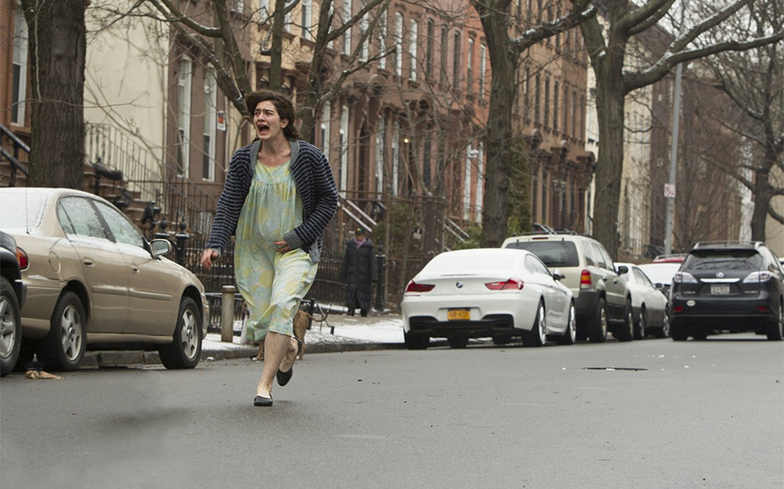 Gaby Hoffman of Transparent fame stars as Leah, an expecting mother who moves into a Brooklyn townhouse with her partner June (Ingrid Jungermann) and their toddler, Lyle. A tragic, unexplained accident results in Lyle’s death, which leaves Leah grief-stricken and paranoid that her neighbours are involved in a satanic cult. The film has widely been referred to as a “Lesbian Rosemary’s Baby”. 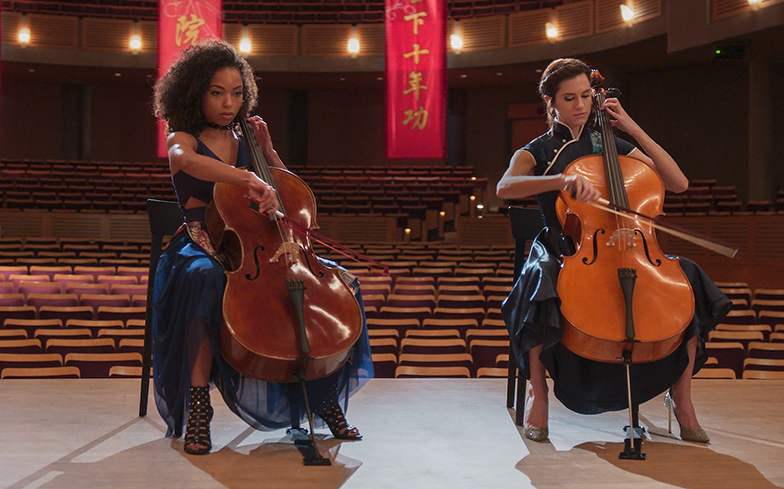 Get Out star Allison Williams returns to the horror genre as the talented but troubled cellist, Charlotte, who travels to Shanghai to reconnect with her former mentor Anton (Steven Weber), who’s running a cello competition alongside his wife Paloma (Alaina Huffman). There, she meets another of Anton’s students Lizzie (Logan Browning), and the two quickly become friends. Shortly after their relationships turns sexual, Charlotte agrees to accompany Lizzie across rural China. Sounds lovely right? Nah, what follows is pure terror. If you’re squeamish, don’t watch. If you’re not, enjoy! 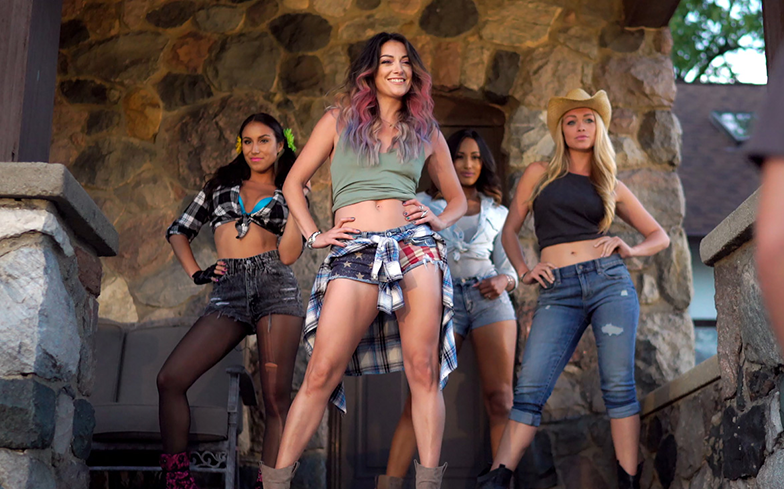 Hunter Killian (Brian Raetz) returns home to Michigan with the support of his friends in NYC to come out as gay to his disapproving conservative father. It quickly turns from a coming-of-age drama into a full-blown slasher flick when the gang become hunted by a deranged, pitchfork-wielding lunatic with mummy issues. It’s gory, raunchy and it’s full of twists and turns! 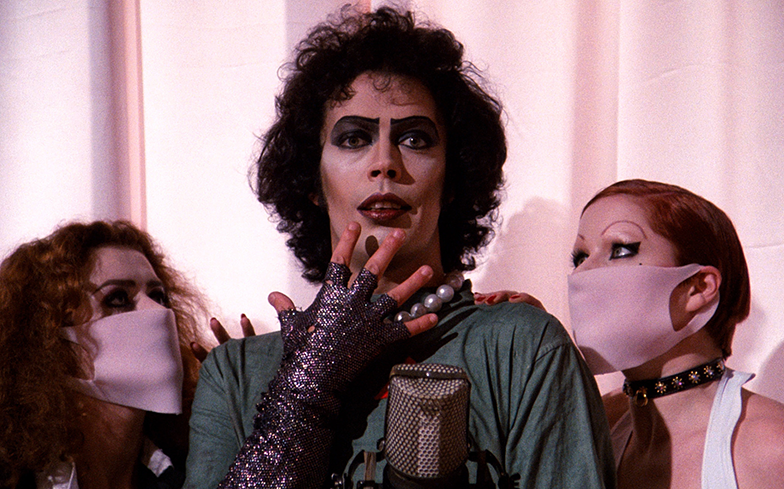 Does this even need a bio? For those who haven’t seen, The Rocky Horror Picture Show tells the story of a young couple whose car breaks down near a castle, which is habited by group of strangers in faaaabulous costumes who are celebrating an annual convention. Their leader, Dr. Frank N. Furter (Tim Curry) – a self-proclaimed “sweet transvestite from Transsexual, Transylvania” – has created a muscle man called Rocky in his laboratory. The film has a massive worldwide following, with fans often dressing up as the characters and recreating the musical numbers. It boasts the honour of being the longest-running theatrical release in film history, spanning four decades, and is often regarded as one of the best films of all time. 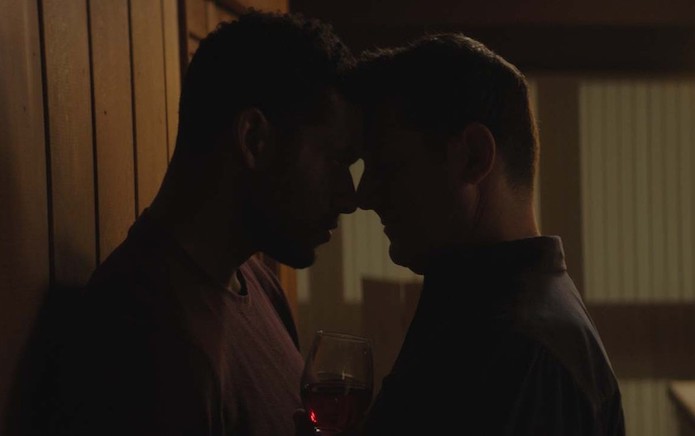 Directed by Kurtis David Harder, the Shudder exclusive follows a same-sex couple who move to a small town in search of a better environment for them and their 16-year-old daughter. “Nothing is at it seems” in the town, “as something sinister lies behind the picturesque homes and welcoming faces of their new neighbours.” Written by Colin Minihan, the film also stars Ty Wood (Chilling Adventures of Sabrina), Chandra West (NYPD Blue) and Lochlyn Munroe (Riverdale). 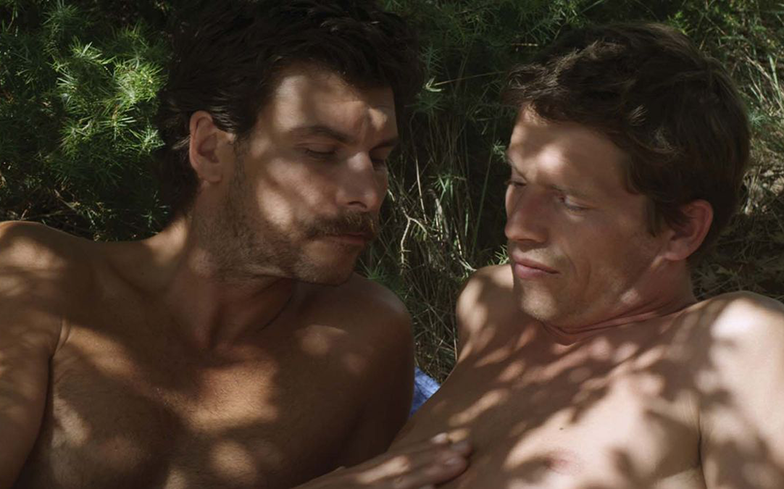 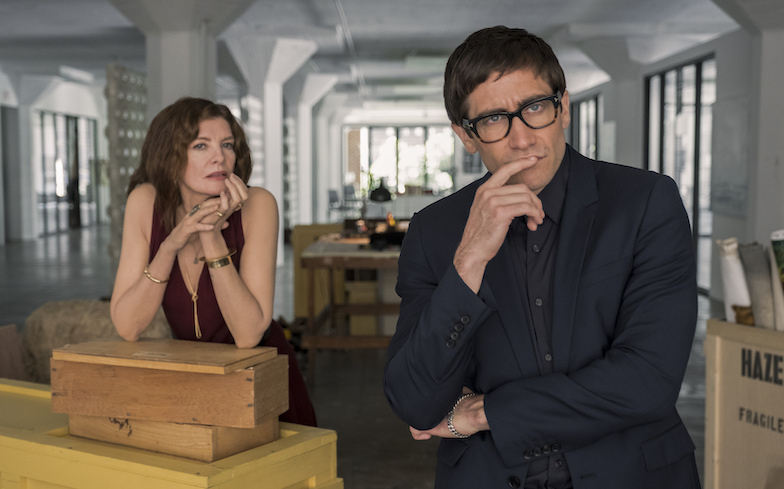 Velvet Buzzsaw stars Academy Award nominated actor Jake Gyllenhaal as a queer snobby art critic who starts to experience supernatural events in relation to a dead artist’s paintings. The film is directed by Dan Gilroy, who previously collaborated with Gyllenhaal and Rene Russo on the critically-acclaimed thriller film, Nightcrawler. 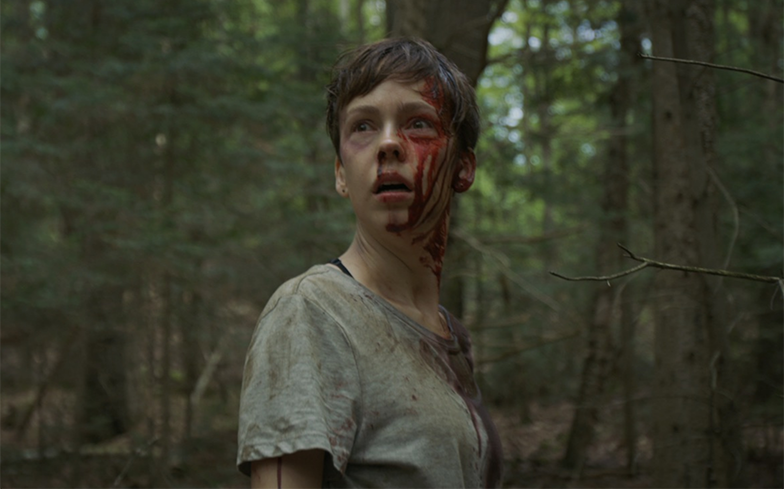 Canadian film What Keeps You Alive follows married couple Jackie (Hannah Emily Anderson) and Jules (Brittany Allen) who visit a remote cabin in the woods to celebrate their one-year anniversary. There, Jackie discovers that her wife is harbouring a dark and murderous past, and her intentions of a cute queer weekend getaway were not entirely… pure. 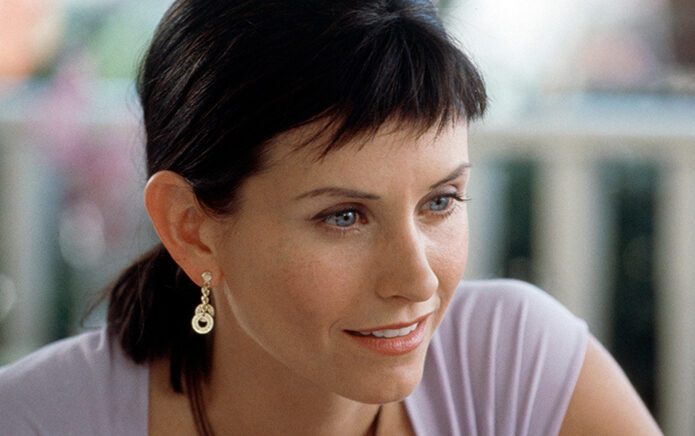 Courteney Cox has revealed that her infamous hairstyle in Scream 3 still haunts her more than 20 years after the film’s release. 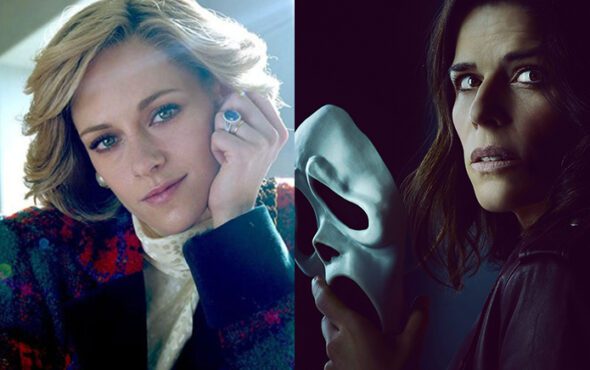 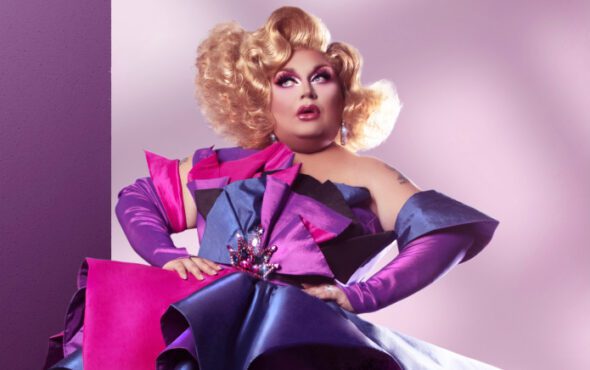