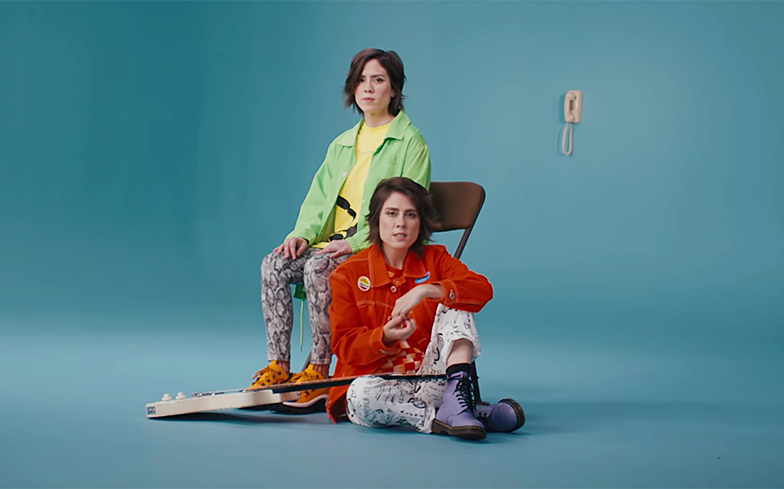 Tegan and Sara have released the video for I’ll Be Back Someday, the lead single from their upcoming album Hey, I’m Just Like You.

Directed by Natalie Fält, the minimal, 90s-inspired visual for the pop-rock anthem sees the duo in various empty, colourful rooms in retro outfits as they wait for someone to call them back.

They said of the video on Instagram: “We really wanted to capture the disruption and manic multitasking we all do now because of our cell phones. The phone on the wall is a physical representation of the constant pull to this device we all have.

They added: “But we can’t answer what it is. Because it’s nothing.”

It’s been three years since the Canadian pop duo released their critically-acclaimed eighth studio album Love You to Death, which featured synthpop anthems such as Boyfriend, Stop Desire and Faint of Heart.

Hey, I’m Just Like You, their ninth studio album, is due for release on 27th September. It will comprise of songs they wrote and recorded when they were teenagers, which they re-recorded this year.

“We had been begging for an electric guitar, and on our 16th birthday, we got one,” said Sara. “Of course, we had to share it, so it became a weapon that we stole from each other’s rooms, barricading ourselves behind locked doors with guitar in hand.

“Screaming over the small amplifier, we tested our voices by writing punk songs, shredding our thumbs on the strings.”

In a statement, the duo said the album would contain elements of their “rock and punk roots, with a punch of pop production” and that it’s the first “Tegan and Sara album produced, performed, engineered, mixed, and mastered by a team of all women.”

Tegan and Sara will also release a memoir, called High School, which will be included with all ticket purchases for their upcoming tour in Brooklyn, Los Angeles, San Diego, San Francisco, Portland and Seattle.

Watch the video for I’ll Be Back Someday below (try and spot the 90s throwback items).