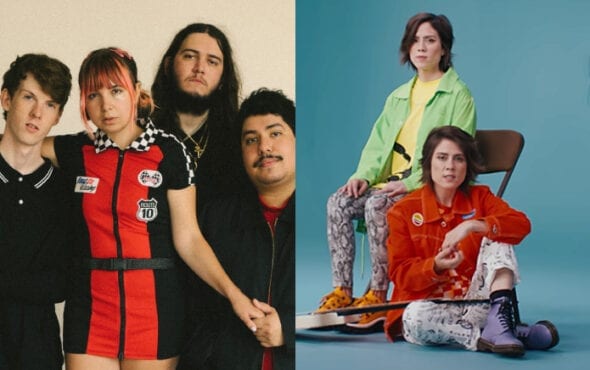 Get ready to hit that repeat button.

Beach Bunny has teamed up with the iconic Tegan and Sara for a new iteration of their popular track, Cloud 9.

But unlike the original single, this new version updates the lyrics with gender-neutral and feminine pronouns.

Tegan and Sara opened up about their collaboration with the emerging band in a statement.

“We’re massive fans of Beach Bunny, and when we heard Cloud 9 for the first time fell in love with the brilliant lyrics and addictive melody,” they said.

“We love that Lili was up to let us experiment with changing the pronoun in the chorus to she. The efforts made to make the song relatable to everyone isn’t just about inclusivity, we think it’s a great indication of the flexibility and creative spirit of the band at its core.”

The original version of Cloud 9 reached massive success upon its debut in 2020. The track earned millions of streams and gained recognition on the popular social media app TikTok.

“It’s an honour, I feel like all my high school friends, I’ve just been telling them and they are all freaking out. I really think a lot of people are going to make new covers of this song, it’s going to be great,” Lili said.

Listen to the full song here and watch the lyric video for Cloud 9 below.