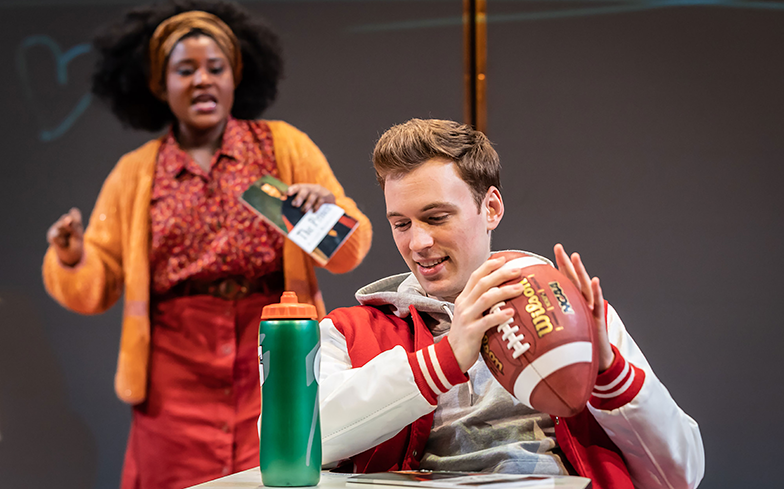 This modern adaptation of Shakespeare’s consideration of power transposes the setting to a present-day American high school. Billed as a dark comedy, it focuses on the story of Richard ‘Dick’ Gloucester, an unpopular kid who sees the opportunity of becoming senior class president – and wielding the power that comes with the position – as an opportunity to turn his fortunes around. His winter of discontent has lasted his entire life; Dick has been bullied for years due to his hemiplegia. He hopes his planned ascent to power is an opportunity to seek revenge on those who have looked down on him for all that time.

It’s an intriguing play which explores a whole host of issues. Disability is considered prominently; not only is Richard (Daniel Monks) disabled but so is his best friend Buck (Ruth Madeley). It’s most notable when others make fun of, or insensitive comments about, their disabilities – including a particularly cringe moment where one character likens having a brother with Down’s Syndrome to understanding what Richard must be going through. It’s uncomfortable to watch, but makes for thought-provokng and engaging theatre.

The prevalence of male heroes in Shakespeare’s writing is a key theme, too. This is most evident towards the play’s conclusion where Anne (Siena Kelly) hijacks a soliloquy to bring this issue to the forefront. Addressing the audience directly, she points out that it’s only ever Richard’s story – or if it’s not, it’s Othello’s, or some other man’s – and takes time to explain what she might have done, had the spotlight been shone on her. It only lasts for a few moments, but it’s powerful stuff.

If it’s all sounding a bit heavy, rest assured that there are some enjoyable moments of frivolity, too. Our favourite was a wonderfully-choreographed routine at the high school dance soundtracked by Cut to the Feeling; we’re all for having our Shakespeare adaptations accompanied by a bit of Carly Rae Jepsen. Throughout the text there are also a smattering of plays on words – those familiar with the original will appreciate the humour.

There’s a lot to enjoy in this modern twist on Richard III – Teenage Dick covers a lot of relevant issues in an intelligent manner. There are some great performances from the cast, it has a good balance of light and shade, and there are some genuinely very powerful and poignant moments, particularly in the final scenes. For these reasons we’re happy to recommend this rather striking Shakespeare adaptation.