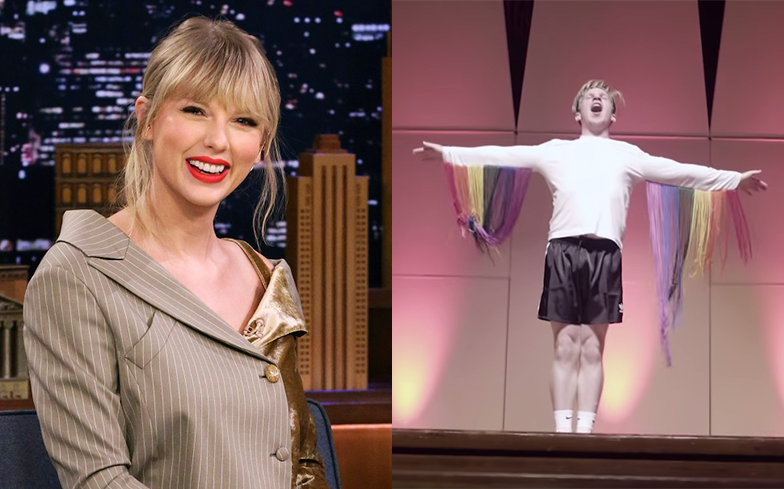 “This just made me SO emotional. I can’t tell you how honored I am that my song has been even a small part in your journey.”

A student from a Christian college has gone viral after using Taylor Swift’s music to come out as gay.

Reid Arthur, of George Fox University, declared his homosexuality to his fellow students with a sensational lip-sync performance to Taylor’s pop hit Ready For It and her recent LGBTQ anthem, You Need to Calm Down.

As he danced to Taylor’s infamous lyric “because shade never made anybody less gay” from the latter, Reid channelled his inner drag queen and incorporated an outfit reveal. He tore off his hoodie to reveal a white top with a rainbow fringe.

“This just made me SO emotional. @reidoburrito95 I can’t tell you how honored I am that my song has been even a small part in your journey,” Taylor tweeted on Friday (22 November). “You did the brave thing and stood up for your truth.”

Reid – a massive Taylor stan – was overwhelmed by her response.

“This woman. My Queen. My Icon. The woman who’s lyrics I have screamed at the top of my lungs. Who’s songs have walked me through the hardest time of my life,” he tweeted. “TAYLOR ALISON SWIFT.

“MOTHER OF MEREDITH, OLIVIA, AND BENJAMIN, KNOWS MY NAME. TWEETED ME. I CANNOT CALM DOWN!!!!!”

Allie Schluchter, a good friend of Arthur’s and a dancer in the video, said “the love and joy” of that moment will remain with her for the rest of her life. “I’m so proud of you @reidoburrito95,” she wrote.

Watch Reid Arthur’s incredible performance to Ready For It and You Need to Calm Down below.

Earlier this year, Taylor said she hadn’t advocated for the LGBTQ community sooner because she “didn’t realise until recently that I could advocate for a community that I’m not a part of.”

“It’s hard to know how to do that without being so fearful of making a mistake that you just freeze. Because my mistakes are very loud. When I make a mistake, it echoes through the canyons of the world,” she explained, in a conversation with Vogue.

Taylor made her stance on the LGBTQ community much clearer with the music video for You Need to Calm Down.

The record-breaking visual starred queer icons such as RuPaul, the Fab Five, Billy Porter, Hayley Kiyoko and Adam Lambert, and ended with the star urging fans to sign her petition for Senate support of the Equality Act on change.org.