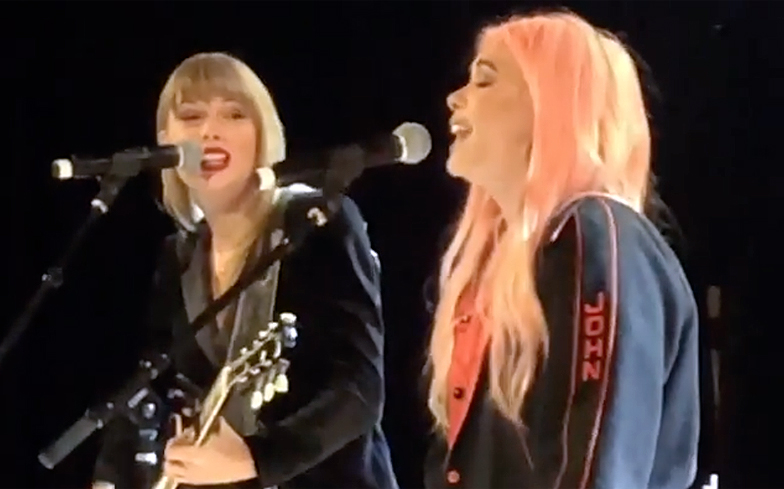 This week, Taylor Swift delivered a surprise duet with Hayley ‘Lesbian Jesus’ Kiyoko at an LGBTQ benefit concert from The Ally Coalition, organised by musician and producer Jack Antonoff.

The non-profit organisation aims to “end discrimination against LGBTQ people by highlighting systemic inequality and LGBTQ-serving organisations and creating opportunities for fans and entertainers to advocate for equality.”

After performing acoustic versions of three of her own songs, Hayley joked to the audience that a “rising artist that just signed to Universal” would join her on stage, before welcoming Taylor for a stripped-back duet of Delicate.

“It’s so great to be at this incredible show,” Taylor said. “Hayley is killing it.”

Other performers at the fifth annual The Ally Coalition event included Rostam, Regina Spektor, and Lana Del Rey – who debuted a selection of new country-tinged songs with Jack Antonoff.

It’s not the first time Taylor and Hayley have performed together, as during her Reputation World Tour, Taylor invited Hayley onto the stage to perform her song Curious, marking her first ever stadium appearance.

Watch videos of Hayley and Taylor’s performance below.

Taylor Swift and Hailey performing at the Ally Coalition pic.twitter.com/vk5D2wgkCI

Earlier this year, Taylor broke her long-held apolitical silence when she announced on social media that she would be voting for Democrats in the US mid-term elections.

One of her main reasons for doing so, she said, was her support of the LGBTQ community.

“I believe in the fight for LGBTQ rights, and that any form of discrimination based on sexual orientation or gender is WRONG,” she wrote, promising to vote for whoever would protect equality.