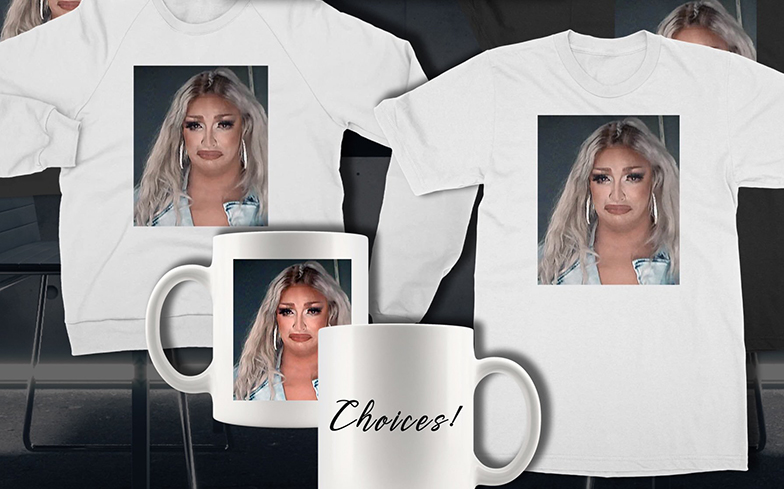 Earlier this week, TMZ reported that drag queen and singer Tatianna – who’s known for her legendary appearances on RuPaul’s Drag Race season two and All Stars 2 – had been arrested for “disorderly conduct” at a nightclub in Atlanta, Georgia.

After an employee took a photo with her, Tatianna allegedly tried to follow them back into the building through a door she wasn’t permitted to use. The employee told her not to do so, but she ignored him and that’s when the police were called.

Tatianna later took to Twitter to confirm that she was “fine” after her arrest, explaining: “It was a dumb situation that I wish didn’t happen but shit happens and people make mistakes. There was no violence or ridiculousness.”

The whole debacle also gave the world a pretty epic mugshot, so she did what any good drag queen would do – put it on a t-shirt.

“You asked so you shall receive! The Disorderly Conduct Collection! Buy yours TODAY!” she wrote on Twitter.

The full collection of merchandise, which is available to purchase from DragQueenMerch, features a t-shirt, a sweatshirt, and even a mug – which features her catchphrase “choices!” on the side – all with Tatianna’s mugshot on them.

She’s also announced a Disorderly Conduct Party, taking place 17 October at TRADE in DC, which will raise money for HIPS, a charity dedicated to “reducing harm and improving lives of communities impacted by sexual exchange and drug use”.

Fans have praised Tatianna for owning the situation (and her mugshot) and turning it into a positive.

“Making lemonade out of lemons,” wrote one fan, while another added: “Queen of making negative things into positive ones.”