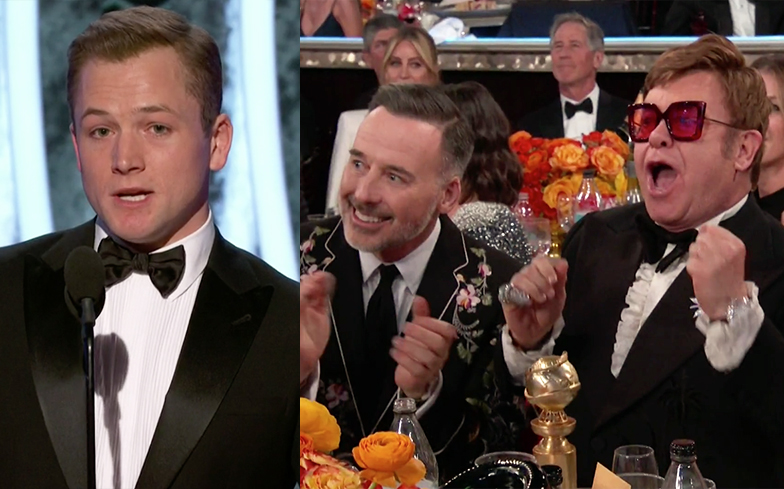 “It’s been the best experience of my life.”

At the Golden Globes on Sunday night, Taron Egerton was awarded the Best Actor in a Musical or Comedy (Film) for his lead role in Elton John biopic Rocketman, beating competition from stars including Leonardo Di Caprio and Eddie Murphy

While accepting the accolade, he used his speech to thank Sir Elton John and David Furnish, who were seen celebrating in the audience.

“This role has changed my life, it’s been the best experience of my life, I am so proud of the film,” he said. “Everyone standing up for Elton and Bernie earlier, it’s just such a joyous thing and we’ve loved every second.”

Taron went on to thank Elton’s husband David “for allowing me to believe that I was the man to play your husband,” and the music legend himself “for the music, for living a life less ordinary, and for being my friend.”

Elsewhere at the Globes, Elton and his longtime collaborator Bernie Taupin took home the Best Original Song award for (I’m Gonna) Love Me Again, which was taken from the Rocketman soundtrack.

When we spoke to Taron last year, he told us that he “hopes” Rocketman will help lead the way when it comes to major studios’ more open approach to gay characters and narratives.

“I’ve got a feeling we’re not far away from a gay superhero. Times are shifting and it’s time [for that]. It feels appropriate,” he said.

“Elton’s life has been so about firsts and pioneering things, so for a movie about his life to be – as I’m led to believe – the first time an intimate scene between two men has been portrayed in a studio movie.

“Obviously it’s not the first time [overall] – there’s some fantastic pieces of gay cinema. Weekend is one of my favourite films, and then you’ve got Brokeback Mountain. But in a studio movie apparently, this is the first. So how exciting [it is] to be a part of something so zeitgeist, so progressive, and so forward-thinking.

“It’s just brave because there are territories where it may… I feel like we’ve put art before commerce a little bit. I think that shows integrity on the part of Paramount, and on the part of the filmmakers.”