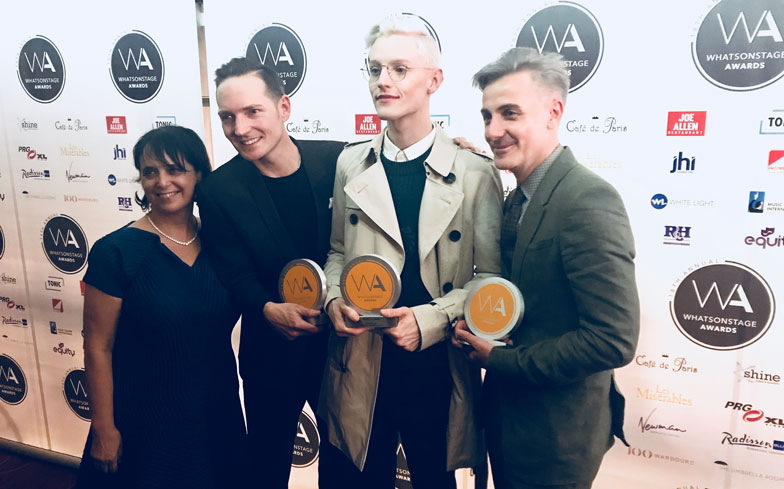 Held at the Prince of Wales Theatre on Sunday night, the LGBTQ-focused show was presented with Best New Musical – a show that follows a young teen wanting to wear a dress to his school prom.

The show also picked up Best Actor in a Musical, presented to Jamie star John McCrea – a role originally created by the actor in Crucible Theatre before its West End transfer in late 2017.

The Sheffield-born musical was also presented with Best Supporting Actress in a Musical to Lucie Shorthouse.

“I think it’s important to put queer voices on stage that are young and relevant to today,” music writer Dan Gillespie Sells told Gay Times at the ceremony.

“I wanted to tell a story that was about now and about the discussions young people are having today – which is slightly different to before.

“I didn’t want to write another coming out story with victimisation in it or one with complex sex issues – or any of it. It’s about a boy who is 16 who wants to go to his prom in a dress and discovers how to do that. It feels real and now!”

We are delighted to have won BEST NEW MUSICAL at the #wosawards !!! Thank you so much for everyone who voted ! #JamieLondon ❤️❤️❤️❤️ pic.twitter.com/3SD9puVUAd

John McCrea explaining to Gay Times the importance of a friendship that soars in the production: “Our show is clever in that it identifies the individual. It eliminates and eradicates the fear.

“You think of a young drag queen, and that’s quite scary, but if you get to the heart of just the boy who wants to be the drag queen, then you’ll fall in love.

“Lucie always says that she’s not playing a muslim girl but that she’s playing a girl who happens to be a muslim. I think that’s the most beautiful way of putting it as, on paper, these two shouldn’t work but underneath the hijab or drag, they’re just human beings.”

He adds: “They’re lost souls and are reaching out for some form of connection – and that’s where they find each other.”

The WhatsOnStage Award for Best Supporting Actress in a Musical goes to Lucie Shorthouse for Everybody’s Talking About Jamie #WOSAwards pic.twitter.com/fHiaD7nVhA

Dan Gillespie Sells noting the importance of winning such an award during LGBT History Month. “What LGBT History teaches us is that we are always evolving and always changing.

“There’s always new discussions to be had and new things that people want to identify with in so many different ways. It’s important to keep the dialogue doing.

It always has been and always will be!”

Elsewhere Broadchurch co-stars David Tennant and Olivia Colman were both recognised, winning for Best Actor in a Play and Best Actress in a Play respectively.

The full list of winners back be found here.