Taliwhoah: “Women are doing what they need to do and getting sh*t done” 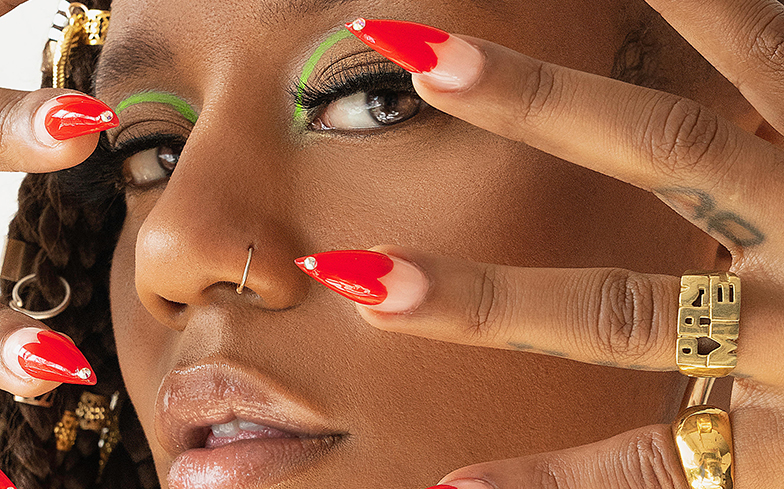 Taliwhoah is the queer late-night R&B star you need in your headphones.

Since we first spoke to her at the beginning of 2019, Taliwhoah’s released both an EP and her brilliant debut album Another Dimension, a record full of soulful pop and Caribbean-inspired sounds. She’s also fully embraced her sexuality, singing of same-sex love on the luscious track Love Cycle and living openly as a bisexual woman – a decision she says has helped her evolve as an artist.

“I’ve always had my little community of people who I’ve always just been myself around, but now having other people be able to identify me and hold whatever opinion it is that they have, I just feel more free because I’m absolutely doing my thing now,” she tells us. “I think my identity is something that’s such a huge part of my music, so to be able to be completely transparent, it feels like I’m finding my place.”

We sat down with Taliwhoah to talk about her evolving queer identity, the response to debut album Another Dimension, and how women in music are “getting shit done” and taking what they deserve.

You released your debut album last November, what has the response to that been like?
It’s been surprisingly good. I was a little mundane about it coming out, just a little deflated in my personal life and new experiences with my career, but the response has been really, really good. Every day someone new reaches out to me about it and is enthused by it and that is the biggest indicator that I’m doing good. People who already support me are continuing to do so, and new people are coming in. It just feels really good!

I remember you said you were ‘shitting bricks’ when Love Cycle came out because it was about same-sex love. How do you feel looking back on that moment?
I’m really proud of it, to this day it’s my highest streamed song, and for it to be something that was so raw and so deeply connected to a personal part of my life, it makes me feel really comforted in my path. There’s a lot of crap that happens from being an artist, you’re constantly reinventing yourself, and sometimes looking back on certain moments can trigger certain wounds that haven’t healed yet. But every time I see Love Cycle, I’m just really proud. I feel like that previous version of me is a version that I’m always willing to be associated with because it’s a part of who I am now. It’s a good marker as well, I did that with nothing, that was very early on, and now that I’m stepping into different arenas I’m like, ‘If I could do that with nothing, then when I have something I’m gonna go all the way’.

How has your identity as a queer, bisexual woman developed over the past year?
I’ve definitely been more exposed, so people who didn’t know now know, and it’s opened up the dating pool as well more than anything. I’ve always had my little community of people who I’ve always just been myself around, but now having other people be able to identify me and hold whatever opinion it is that they have – whatever that is, because they’re entitled to it – I just feel more free because I’m absolutely doing my thing now. I’ve dabbled in different partners in the last couple of months, which I was definitely not trying to do at first, but it’s been fun. I think my identity is something that’s such a huge part of my music, so to be able to be completely transparent, it feels like I’m finding my place.

You just mentioned dating, is discrimination something you’ve experienced in that area of life as a bisexual woman?
Yeah, it’s definitely been an issue, mainly for the males that I’ve dated. Being seen in a certain light by cis men has always affected me in a certain way, because it’s like, ‘I’m no less than any other woman you’ve dated just because I’ve dated women as well, and I’m not someone you can’t settle down with or get married to just because I’m bisexual’. Now that I’ve made my statement, whatever they needed to hear to identify me or put me in this box, they’ve heard it now and I’m like, ‘Okay, well you come knowing who I am, knowing that this is a part of me that I’m not going to mute or be ashamed of’. I think previously it would affect my dating, now it’s like, if you choose to date me, you’re seeing me fully and accepting me fully, and you know what you’re getting into. So it’s way better now.

You live at the intersection of being a person of colour, being queer, and being a woman – have you found it hard navigating that, where you can face discrimination for all these different parts of who you are?
Yeah, but I think for me the struggles came from a personal infrastructure, I struggled with my identity a lot because I had this traditional idea that I was trying to live up to with being Black and African and Caribbean, and having those traditional standards that my family had set in place for me from generations before I was even alive, and I wanted to be obedient to that, but then I had these feelings and deeper connections with other human beings and life in general that I wanted to be true to as well. I struggled with the balance between the two, because in all of those previous experiences all I was trying to do was make other people happy. So it took a lot for me on a personal level to find who it was that I wanted to be. I wasn’t really met with a lot of external struggles, because those personal struggles made me hide away and people didn’t really get to know me or see me in a certain light, I was always very surface level with people. It took a minute for me to feel okay and make peace with some of the things I’d been through. So yeah, I did have some life struggles but it was mainly the personal things that were messing with me.

One thing I’ve seen a lot of marginalised people say recently is, ‘I’m done explaining myself, why should I have to teach you about racism, or homophobia, or transphobia?’ Is that something you align with? Or is there a part of you that wants to educate?
I have asked myself this very question so many times. Am I supposed to use my platform for something? Do I even want to use my platform for something? I haven’t really decided yet. I am coming away from a lot of personal traumas that I haven’t quite figured out how to navigate through, and I don’t want to set examples based in unhealed territories of my life. I don’t wanna go out there trying to be a voice for something if I haven’t even healed from it yet, or started a road to healing. I really wanna be mindful of what I advocate for. So at this point, no I don’t think it’s my responsibility to teach certain people, but will I feel that way in a few years? Who knows. I may come away from things and be like, ‘No, I can’t let people be ignorant to these things’, but at this very moment in time I need to focus on unlearning certain things myself, and being transparent with what I’m unlearning. If people can take something away from that, that’s amazing, but if not, it’s not my duty to enforce that. But I do hope that through transparency people can take away something from my experiences.

Historically, women haven’t been given respect when it comes to creating music, whether that’s because they haven’t been allowed the chance to write and produce, or they have and they’ve not been believed or given credit for it. We’d like to imagine things are getting better now, but do you think women are given enough respect in the industry?
We do live in this bubble where we think all of this activism is going to a certain cause and we’re going to see results. But from my perspective, I think it’s hard to not recognise women anymore, especially because the internet is exposing everything now, you’re seeing who’s behind the scenes and who’s putting the work in. Because of that, it’s hard to play blind to it, and I think that’s a great thing – but there’s always space for more. Equal pay is one of the main things, to take that recognition and put it into action. When things like that start to happen, and women are given the same titles and income as their male counterparts, then I’ll be able to say, ‘Yes, we’ve accomplished something’. Women are just too in your face now for me to even give credit like, ‘Things are getting better now’ – no, women are getting stronger and women are doing what they need to do and getting shit done. That is happening, as opposed to times getting better. And we’re just getting started.

Listen to Taliwhoah’s debut album Another Dimension on Apple Music.