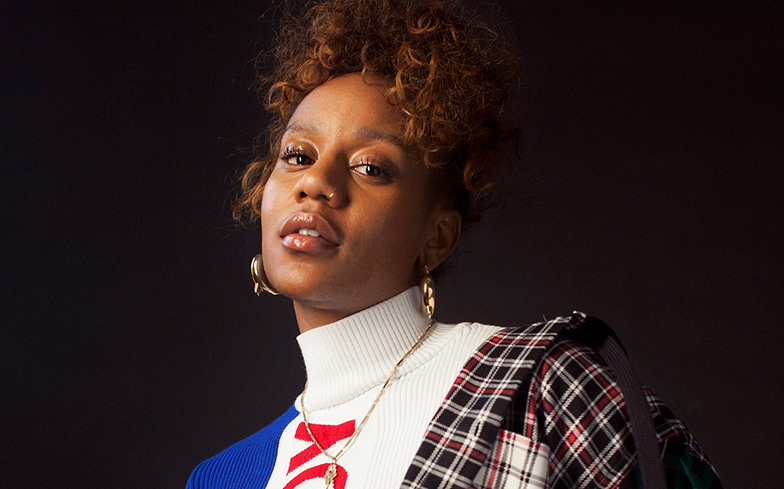 “I was shitting bricks,” Taliwhoah laughs as she recalls sharing her self-directed music video for latest single Love Cycle.

Described as an ode to late night R&B, the track seduces with soulful vocals and luxurious beats as the London-born, LA-based singer-songwriter invites a lover to “go to a place they can’t find us” and treat each other right. Where the song is relatively ambiguous, the video makes it clear: This is a story of same-sex love.

“I do have a very safe space with my friends and the rest of my queer community who have always known, but going public with it was definitely a shot at my anxiety,” she says of announcing her sexuality to the world. “But after a while I just had to say, ‘This is my truth and I shouldn’t be afraid to be who I am’.”

With 2019 officially dubbed 20BiTeen, we sat down with Taliwhoah to discuss the importance of queer visibility, discrimination she’s faced as a bisexual woman, and the impact that streaming – both good and bad – has had on the music industry.

Love Cycle is a more soulful and mellow song than what’s come before. What inspired that change?
I think it’s the emotional motive of the song that really drew me in. The production is a bit far-left from most of my stuff, but it happened so naturally. I didn’t force the change, I just heard the beat and it evoked what I wrote. I’m really one of those energy people. If the vibe is right, let’s just do it, you know what I mean?

Were you worried putting a song and video out that are so explicitly about same-sex love?
Initially, I was working with a director and a production team that didn’t really execute the storyline they had in mind for me correctly, and it turned out there was a lot of footage we shot that we couldn’t use. So when I sat back down with all the footage to figure out what I was gonna do with it, I just said, ‘Scrap all of that, let me tell my story and the real reason behind the song’. So I completely re-directed it, and I think because everything was happening so fast and I was trying to get through it, I didn’t really have time for the nerves to sit in until the day before release, and then I was an emotional mess. I was like, ‘My family are gonna see this, all my friends are gonna see this’. But I have a community of people who support me already, so it went away after a while. But yeah, I was definitely shitting bricks!

What has the response been like so far?
It’s actually been better than I could have imagined. I’ve had people messaging me crying, sending voice messages on Instagram, and I’ve had parents whose children have sent them this video specifically to say, ‘Hey mom, hey dad, I think you should listen to this because there’s a message from me to you’. To have people respond to their kids with so much love and in turn want to extend that love to me has just been extremely overwhelming. My mom even had a heart-to-heart with me which has changed my life forever, she’s reassured me of the unconditional love she has for me. My grandma and my cousins too. I come from a very strong Arab and Afro-Caribbean background, so traditionally it’s a bit far-left for them, but everyone’s welcomed me with open arms, and those who haven’t welcomed it haven’t gone out of their way to mention it, they’ve just kept quiet, which I can respect.

Do you think it’s important for LGBTQ people to be open about who they are in the industry?
Absolutely, we have to be visible. It’s not like we’re going anywhere, it’s not like we all suddenly sprouted out of the ground, we’ve always been here. We might have not been as visible, but the facts are we’ve always been here and the more we get people to be comfortable with our visibility and what we stand for and our beliefs, the more that society makes it acceptable. I think a lot of the time what people fear is the unknown, and the only way to get to know something is to familiarise yourself with it. That doesn’t mean you have to necessarily dive into the community and be a tool for the community, just accept that this is who we are, and we have a right to be who we are just like you have a right to be who you are. So I think the more that we encourage one another to just speak our truth and live our truth, the more that the rest of society will accept us.

There’s been a lot of dialogue lately around the very specific types of discrimination that bisexual people face, even from other people in the LGBTQ community. Is this something you’ve experienced?
Yeah, absolutely. I’ll never forget when I first went to a gay club – I remember the day so strongly because it was my first time seeing what was out there for me – and a girl approached me, she was interested in me, and she asked me, ‘Do you like girls?’ and I was like, ‘Well, I like girls and guys’, and she was like, ‘How can that be?’ It was almost like it was alien to her that I could just see a person for who they are, and accept the feminine energy and the masculine energy, whatever that person chooses to put out there. But then if I’m being quite honest, I might have discriminated against bisexual men in the past, because I never used to understand it, and I had to really take a good look at myself and say, ‘Well how can I ask for acceptance when another concept that is so synonymous to mine is so alien to me?’ So it was a huge learning curve for me on both sides. The more you try to understand, the more you realise it’s really not that hard to accept. Have you ever worried that being out as bisexual might hinder your career?
Definitely. As a woman in music, I’m marketed to appeal to the women that want to be like me or dress like me, and to the men that want to have sex with me. So the over-sexualisation of women in this industry – because sex sells – is always something I’ve taken into consideration. I don’t want a certain demographic to feel disconnected from me because I’m openly bisexual, and they’re trying to figure out, ‘Is she talking about a guy? Or is she talking about a girl?’ That used to cross my mind quite a lot. But I think if we do our research, we’ll find that a lot of artists we thought were heterosexual are actually not, and even though they chose to sing about songs in a certain context, that doesn’t mean that’s where it’s written from, so that comforted me a little bit. No matter what, people are going to judge me, so I may as well live my truth and let them do with it what they please.

When did you realise you wanted to be in the music industry?
I always wanted to be in the industry, from a young age I always aspired to be some type of performer, but I guess it was more so from a dancers perspective. I was so confident in my dance ability that I didn’t think I was a singer. I didn’t really even think I could sing…

…how could you not know you were a good singer?
I guess in my mind, the standard of singing I’d set was so high, I was looking up to people like Beyonce and Aretha Franklin and Michael Jackson, and I was like, ‘My voice just doesn’t sound like theirs’, and even though Sade had a huge influence on me, I still felt like I was exempt from that world. I didn’t think people would want to listen to my voice. After a while, around when I turned 21, I started to explore what made my voice and my songwriting unique, and from there I started to realise that people actually liked it. I was never in it to become famous, I just wanted to find myself and use whatever tools I had to do that.

Where do you get inspiration from when songwriting?
A lot of it is about how I’m feeling, it’s about the stories that people around me share. I really use my gut instinct and my emotions to kinda drive this little music vessel in me, because I can’t talk about what I’m not passionate about. I know there are songs you can write that are very fun and aren’t that in-depth, but even then I’m writing it because I’m happy and I wanna dance. It’s really just about what I feel in the moment. Did you have any LGBTQ icons you looked up to when you were growing up?
Yes, I did actually. My mom was an additional member to a band called Boney M, and her manager Donovan was so flamboyant, he would go to business meetings wearing those pants with the butt cut out of them, and if he wanted to wear makeup one day, he would. He was just so himself and he really lived his truth. And my mom never really explained it to me, it was just, ‘That’s Uncle Donovan, that’s the way he is’. She never explained to me that it was because he’s part of a certain community. He was definitely my first introduction to all that. Also, I was always drawn to a lot of men in the industry who weren’t out, people like Luther Vandross, and I never understood why I loved them so much, but obviously getting older and learning about them, I was like, ‘Wow, it totally makes sense now’. We were connecting on a more spiritual level.

We’re living in the streaming era, do you think this has made it harder or easier to become successful?
I think it has its pros and its cons. With numbers, it’s so hard to say whether it’s organic or not, because you can generate numbers through bots. It’s hard to get a tangible sense of who’s actually supporting you. Somebody could just listen to you by chance, because you appeared on a playlist, and though that can work in your favour it can also be misleading as to whether or not you actually have a strong fanbase or not. So I think yes, it’s helping, but as an artist your desires have to go past the numbers. There’s not a lot of longevity in being the highest-streamed artist when your actual physical reach isn’t equally as strong. I grew up buying physical copies of CDs and records, and I think that was more indicative of whether or not you actually had a fanbase, because nobody’s going to spend money on an album they don’t really want to own. Of course we’ve got to move with the times, but also make sure we’re keeping some elements of what sprouted the industry.

How is work on your debut album going?
It’s ready to go, we’re just deciding on a release date. I’m hoping it will happen soon. I think this album is a good indication of what to expect from me, it shows that there’s potential and growth. You can expect a lot of story-telling, a lot of genre-bending and more of my truth. It’s me figuring out my voice really, so I hope everyone’s ready for that!