Take this: The Band musical delivers a pop-tastic punch – review 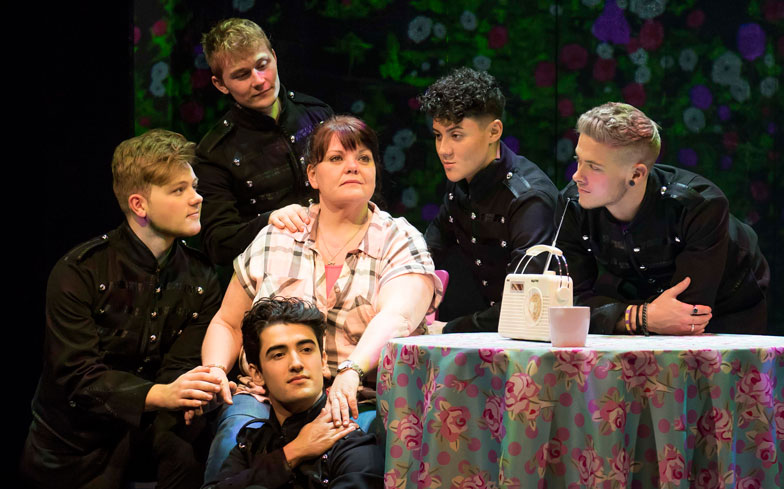 A thrilling new musical that champions the power and solidarity of female friendship.

When Five to Five won BBC One’s talent show Let It Shine, it marked the beginning for a new ensemble of male talent that could hopefully fill the 1D void. Now touring the UK as part of their winning telly prize, Curtis, Yazdan, AJ, Nick and Sario head into battle with a new musical by Tim Firth – all based around the music of pop big-hitters Take That.

We, like many others, wondered if the music of such a signature British band could translate to the stage. They’re songs that, like for you, mark many different parts of our lives. For some, the music is that of a celebration. To others, they may even cover great loss. Here they’re all that in a supporting songbook to a story of strength and the power of female friendship.

The Band follows a group of ladies as they move through life with a collective love of a certain boy band. Together, and told through both younger and older actresses, it cleverly confirms that such a love and united passion never quite goes away. And those night’s spent screaming at concerts or dancing around your bedroom pretending you’re a backing dancer for them (don’t pretend you haven’t done this) probably meant more than just a love of music. It was something and someone to believe in. Call it a group of friends without even really knowing them.

With Take That’s music laced throughout, we caught ourselves mumbling along to all those on stage; both the boys and their leading ladies tackling the hits. From Relight My Fire to Shine and a highly emotional take on A Million Love Songs – presented exquisitely by Curtis T Johns – The Band houses a songbook that’s perfect for the stage. The boys of Five to Five find their feet ideally throughout and mark themselves as performers suited to the stage; much to their credit and talent. Their female co-stars, and in particular Alison Fitzjohn (Claire), of equal success.

However the surprising standout for this show came in the form of Tim Firth’s witty and somewhat devastating script. Exploring the idea of loss and heartache on many levels, The Band musical is a serious punch in the stomach for the emotions. This isn’t your average jukebox tale that swings along to the soundtrack of your youth, but one that marks itself as responsible and true. We, like many around, were shocked but also highly commendable to such actions; ones that other not-so successful shows could do with taking notes on.

Related: The boys of Take That’s The Band musical bare all in exclusive Gay Times shoot

Sadly such a kick doesn’t come from the costume or scenic design which does fall behind other creative decisions. We’re hopeful a London run for Kim Gavin and Jack Ryder’s production could be on the cards, and with it such changes could be made. This is the music of Take That – where’s the sweeping staircase or impressive video design? Tour limitations however duly noted.

And yet, you’re forgiving to such decisions once the smiles of Five to Five return to lift your spirits once again. It’s an unusual placement come the start of the show to not find the boys the ‘stars’ of the night, but The Band is a team effort that plays into the great work of all; rightfully putting their leading ladies front and centre. Tim Firth’s inclusion of a leading LGBTQ character also raising smiles to both our faces and many around us.

Yes, it’s different and we’d admit there’s the occasional sprinkling of light humour which might not fit for everyone, but The Band shakes up the medium of musical theatre. It’s fresh and new and sends a large middle finger towards those that simply want everyone to deliver yet another serious and dramatic classic musical.

No thanks, sweetie, we’ve got a story of love, success and friendship to champion. And in a world of such hate, The Band lets unity and solidarity shine – and we’d ask for nothing more!