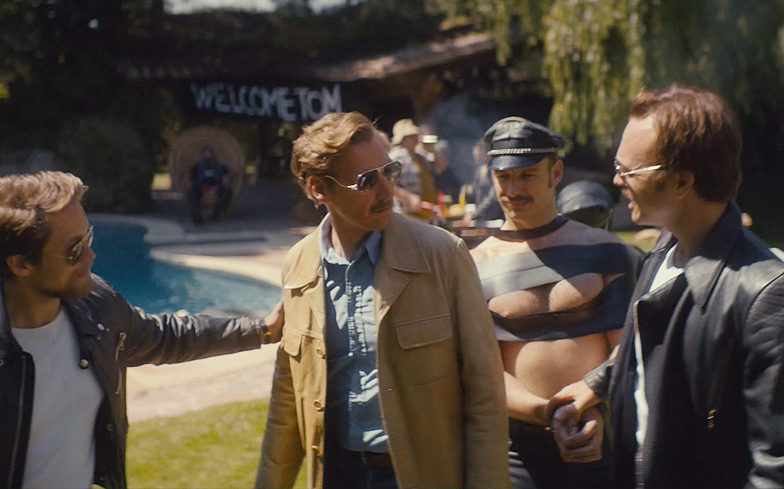 If you missed the Tom of Finland biopic when it hit cinemas this summer (or just want to relive it all over again), you don’t have long to wait until you watch it in the comfort of your own home.

After serving his country in World War II, Touko returned to Finland at a time when homosexuality was still illegal.

However, while working in an advertisement agency, the artist began drawing muscular, explicit, and proud gay men, which would go on to become legendary pieces under his guise of Tom of Finland.

The film sees how his work began to reach wider audiences, taking him to Berlin, and then on to Los Angeles.

Related: Tom of Finland’s new store is as gloriously explicit as you’d want it to be – NSFW

This exclusive clip from the film takes us inside one of Touko’s infamous pool parties, where you can see the models that inspired Tom of Finland’s distinctive artwork.

Tom of Finland will be released as part of a Limited Edition Dual Play (Blu-Ray and DVD) package, which includes interviews with Durk Dehner, as well as a handful of deleted scenes. It will be available on 20 November, and features some of Tom of Finland’s timeless artwork on the packaging and discs.

“I’ve heard countless stories of men telling how they felt when they first saw Tom’s drawings and how that changed their lives,” director Dome Karukosi told Gay Times earlier this year.

“Many said they left their previous lives to start afresh, often in LA or San Francisco. I can only imagine the self-empowering moment and the strength the drawings must have given to these men.

“We’ve tried to bring this into the film, with the help of people who actually changed their lives because of Tom. The Tom of Finland Foundation has been a great help when trying to access these stories.”

He added: “I’m always happy to see art that provokes. In Tom’s case, it demonstrates the power of his imagery.

“I honestly don’t think that the stamps themselves are ‘too dirty’. Underwear ads or soda commercials can be dirtier.

“These complaints are really more because a gay person is getting his own stamp, which shakes the minds of the conservatives.”

Related: Gay artist and icon Tom of Finland now has his own emoji