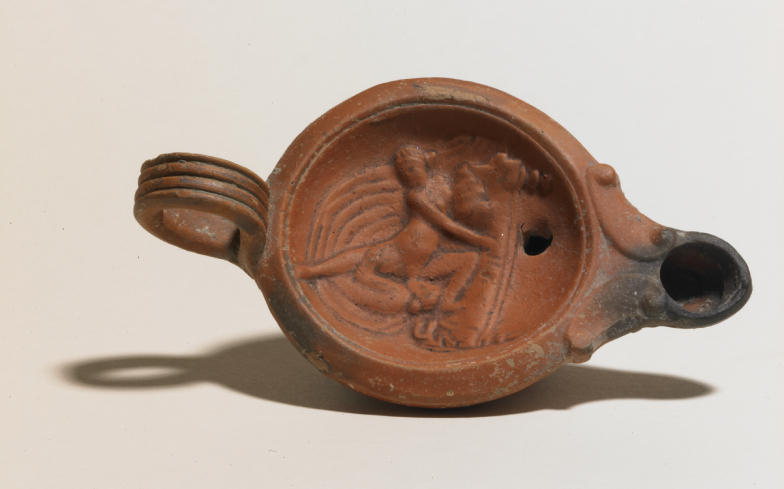 What better time than Pride Month to look back at queer history through the ages?

It’s why the British Museum in London chose the month of June to reveal five new permanent objects with LGBTQ+ history that have been added to their permanent display.

These objects will also be added to future physical tours of the museum when it reopens, continuing the British Museum’s successful regular LGBTQ+ tours over the past year.

“We’re really pleased to be putting these five objects on permanent display as part of our ongoing efforts to better represent the full range of stories and identities that can be found in LGBTQ+ history,” said Stuart Frost, Head of Interpretation and Volunteers at the British Museum.

“They join a number of other objects on permanent display that collectively demonstrate that same-sex love, desire and gender diversity have always been an integral part of the human experience.”

Sarah Saunders, Head of Learning and National Partnerships at the British Museum, added: “We’re really looking forward to reopening as soon as it is safe to do so, and restarting our hugely popular LGBTQ+ tours.

“We want to make LGBTQ perspectives accessible to as wide an audience as possible, so we are actively searching for the generous support of a brand or business to help us rapidly increase our LGBTQ programming, including doubling the number of tours we offer each month.”

The British Museum has given GAY TIMES the exclusive first look at the five objects being added to their permanent display, as well as giving us the history behind each of them, which you can see below.

Who remembers the ten-shilling note or the ten bob note as it was once known? The note was withdrawn from circulation in 1970 and disappeared in tandem with the popular expression with which it was so closely bound, ‘as queer as a nine bob note’. This Nine Bob note was made for use in a club event organised by Duckie in 2008, Gay Shame Goes Macho. Gay Shame was a reaction to the perceived increase in gender stereotyping and commercialisation of Gay Pride events from within the LGBTQ community.

British bank notes carry a portrait of the Queen, but here instead – surprisingly – we have the East End gangster Ronnie Kray (24 October 1933 – 17 March 1995).  In the margin of the cameo the image asks ‘Do you know my face?’. Ronnie was gay – something that was recognised and known by many at the time. The Kray twins – Reggie and Ronnie – were sentenced to life imprisonment in 1969.  A ten shilling note also usually carries a depiction of Britannia but here we have a rubber duck instead.  Yet, for all these changes the design skilfully evokes the appearance of the original ten shilling note.

This small bronze medal – issued in 1777 – and part of the collection of Edward Hawkins (1780-1867) which the British Museum purchased in 1860.  It depicts a remarkable individual, known to history as the Chevalier d’Eon.  One side of the medal carries a portrait of the Chevalier as a man – but if you look closely, you’ll see the inscription above the portrait reads Madame D’Eon.

D’Eon was celebrated 18th-century soldier, diplomat and spy. They lived openly as a man and as a woman in France and England at different stages of life, drawing much public interest. Charismatic and talented, the Chevalier inspired the production and circulation of images and there are large number of prints of them in the Museum’s collection.

The Chevalier was born on 5 October 1728 to a minor aristocratic family in Burgundy. Bright and articulate, d’Eon worked as a spy and diplomat for King Louis XV of France in Paris. After a stint as a Captain in the French Dragoons, they were sent to London as a diplomat. They embraced London life and continued to spy for the King before falling out with a superior. The Chevalier then sought political exile in London and published secret diplomatic documents in one of the most scandalous books of the time. The controversy caused by the book meant that d’Eon became something of a celebrity in London.

There had long been rumours in both Britain and France that the Chevalier was a woman, which developed into intrusive, prurient public interest. Having acquired almost celebrity status by 1771, London bookmakers had even begun to take bets on d’Eon’s gender as the public debate raged on. From late 1777 onwards – the year that our medal was produced – the Chevalier began to permanently present as a woman.

In old age, the Chevalier lived with a widowed friend, Mrs Coles, in modest circumstances. Despite the fame and notoriety that had accompanied this remarkable life, d’Eon died in poverty in May 1810, at the age of 81. Today the Chevalier is recognised as a talented and tumultuous personality, who was celebrated both as a man and as a woman during a long and eventful life. You can find out more about the Chevalier d’Eon on our website, and explore their life through a number of prints.

The poet Sappho (about 630–570 BC) lived in Mytilene on the Greek island of Lesbos. This coin was issued by the city over 700 years later to celebrate its most famous daughter at a time when many cities in the Roman Empire produced coins to demonstrate their importance through illustrious ancestors. It is one of the earliest images of Sappho in the Museum’s collection. Little is really known about Sappho’s life apart from her poems. Only one complete poem by Sappho survives, the Ode to Aphrodite, the rest are known through fragments. By the 19th century her poetry had made the word ‘Lesbian’ – someone who lives on Lesbos – a term for a woman who loves women.

This terracotta lamp depicts two women engaged in oral sex, generally regarded as taboo by the Romans. It probably represents a male fantasy rather than reality, but is the type of object that could have been used by men or women. Heterosexual sex scenes are relatively common on this type of mass-produced lamp. The lamp was acquired by the Museum in 2005, a relatively recent addition to the collection.

There are many Japanese wood block prints in the Museum’s collection that reflect LGBTQ themes. Some of these depict wakashu – male youths – who were desired both by men and women and who, with their androgynous appearance, constituted a ‘third gender’. Between about 1600 and 1900, thousands of sexually explicit paintings, prints, and illustrated books were produced in Japan. These were known as ‘spring pictures’ or shunga. Shunga generally celebrates sex, and focuses on mutual pleasure. Although most scenes are heterosexual, same-sex encounters are also common particularly between men, but also women – we have examples of both in our collection.

Shunga is in some ways a unique phenomenon in pre-modern world culture, in terms of the quantity, the quality and the nature of the art that was produced. During the 20th century, shunga was all but removed from popular and scholarly memory and became taboo. Recent research and exhibition has led to a reappraisal of the genre.  You can explore the Museum’s collection of shunga – and other Japanese prints – online.

The print you can see here dates from the 1820s and depicts a famous Kabuki theatre actor (Iwai Hanshiro V, 1776-1847).  It is a type of print that was not meant to survive and this one appears to be the only known example of this impression.  It should have been cut out, pasted to a fan and then thrown away when it had served its purpose. In traditional Japanese theatre, female parts were played by men. Hanshiro V was a specialist in female roles (onnagata). Here he is shown off-stage arranging flowers, still dressed in female clothing.  Onnagata were frequently shown in prints like this living their off-stage lives in feminine attire.

Younger male actors of female roles would also sometimes provide sexual service for male clients. We do have some shunga in the Museum collection that depicts scenes between actors and their clients.

You can check out the British Museum’s Desire, Love and Identity themed section of their website here to discover more artefacts.

To find out more about the British Museum’s commitment to exploring LGBTQ+ history, visit their official post about it here.