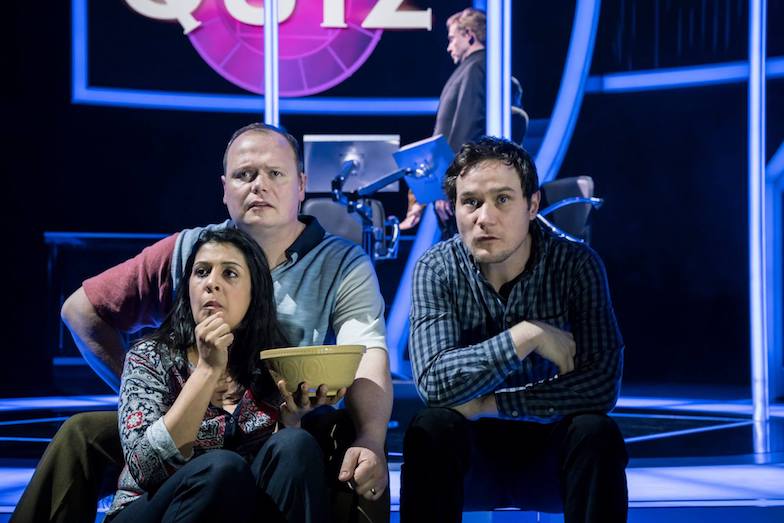 Now playing at the Noël Coward Theatre having started its life at Chichester Festival Theatre, director Daniel Evans’ work examines the truth around the media. Are they, regardless of their promise, always preaching the truth. Are they always giving us the full story, or are we often presented with just one bias angle? All those are discussed here in a thrilling night at the theatre, plus you get to play a cute game of Who Wants To Be A Millionaire while deciding if the coughing scandal was, in itself, actually a fix.

The idea of a reality game show being a play seems a slightly odd idea, especially when you add in that a coughing scandal saw its contestants found guilty by a court of law. Not one in this story, but a real life court. Far from a spun narrative that’s exaggerated for the stage, James Graham’s piece is a clear two-parter. From the side of guilt, and the side of… well, Charles Ingram – the man at the heart of the story.

Related: The Inheritance: An extraordinary and astonishing look at gay lives – review

Winning the £1 million jackpot with his wife by his side in the Who Wants to Be A Millionaire studio, Quiz humorously allows its audience to look inside a serious story in a new way. Featuring an actual audience quiz, audience voting and some nifty graphics and video design (Tim Reid). Set inside a revolving set that mimics the Millionaire set, there’s everything from Coronation Street to Bullseye gags galore. That is alongside courtroom dramas, and at home with the Ingram’s.

Keir Charles as the warm-up guy starts as every gameshow does, with the audience primed to cheer on both the show and host a like. And as he takes on Chris Tarrant and a series of iconic game show telly faces, his perfectly crafted ride through the show leaves great humour spinning around the theatre As the wife of Charles, Stephanie Street’s second half performance as Diana Ingram questions just how bias the media is. Although we won’t spoil quite how much the audience shift changed the night we attended, it certainly left us with many questions about the final guilty verdict handed down out, all those years back.

Take a gamble on Quiz. It’s fresh, new and rather darling thrilling. And who knows, maybe you’ll leave the theatre with a difference opinion on one of the biggest telly scandals ever.