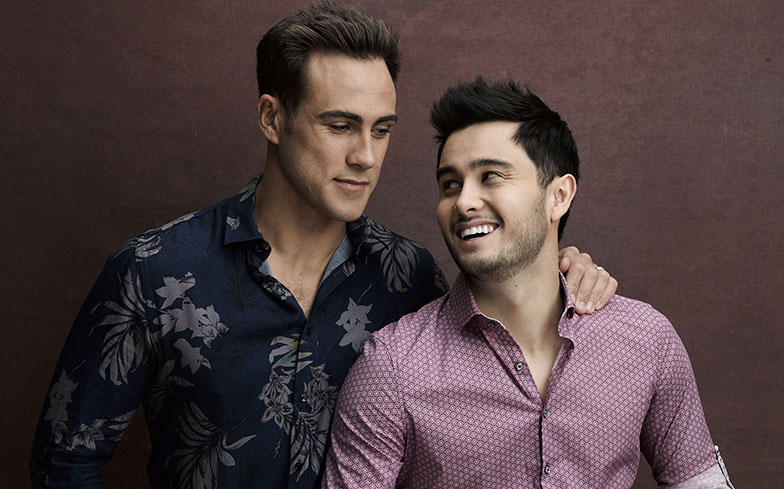 The stars of Neighbours’ first ever same-sex wedding speak on the importance of acceptance and representation for the LGBTQ community.

It’s an achievement that actors Takaya Honda and Matt Wilson aren’t taking lightly, as they tell Gay Times they’re “proud” to be providing representation for the community. We caught up with the actors to discuss the anti-gay rhetoric surrounding the recent marriage equality plebiscite, and why their onscreen wedding is so important for LGBTQ people in Australia.

How does it feel for you both to be part of such a momentous occasion?

Matt: It’s surreal, and sometimes it feels like I don’t deserve it. There are so many actors in Australia and for some reason I’ve been blessed, and I feel like it’s one of the most important roles in the country right now. We’ve had feedback from guys saying that we’ve given them the courage to come out, or that watching the show and relating to these characters has brought them to a happy place.

Do you think shows like Neighbours can be used to change people’s minds about LGBTQ people in a positive way?

T: Absolutely, and I think it has done already. I’m sure if you were to look at the demographics through the years of the people who watch Neighbours, and what their opinions are not only of the gay community but of ethnic minorities and things like that, it has definitely evolved over time to a point where you’ll see a negative comment on the Neighbours Facebook page, and there’ll be 50 replies in rebuttal to that negativity, and they’ll be bringing positivity instead, and that’s an absolutely incredible thing to see.

M: The fact that Neighbours has been celebrating equality for years, even before I was part of the show, is incredible. It’s definitely been a working case for years and years, and that’s all kudos to the production and writing team.

Takaya, you mentioned how the show is also helping provide representation for ethnic minorities. Most of the time you see gay characters on TV they’re white, so do you feel extra proud that you get to be an ethnic minority and a gay character on TV?

T: Absolutely, and during my first meeting with the producers at Neighbours when I got the role I thanked them for making a character who is of Japanese descent, but isn’t someone who’s defined by that heritage. All too often I’ve had auditions which have been an Australian character of Japanese descent who’s been defined entirely by being Japanese, and this was a role where I got to play a character where, ‘Hey, I have a background, but that’s also not the most interesting thing about me, there’s a hell of a lot going on here’. I’m not having to do some accent, because it’s come to a stage where people can accept that a person can not look white, and they can have an Australian accent on TV. That was an awesome moment for me, because it’s not something that I grew up watching all too often, and I love being part of that representation. It seemed like there was quite an aggressive anti-gay rhetoric during the same-sex marriage debate in Australia. Is this something you noticed going on around you?

T: It was hard not to notice, but it only made me more impassioned to work harder and continue to bring truth to what I’m doing. If anything, the louder they yelled the negativity, the more I felt what we were doing – as a very small part of the movement – was affecting change enough to scare people into being horrible, to try to counteract it, so that to me was a signifier that we were on the right track and that equality was on its way, really.

M: Whenever we saw the news, there weren’t many people who would actually show their face to do an interview about being anti-gay, they were just quotes, so a big part of me found it hard to believe that these people were actually out there. I thought it wasn’t real. The plebiscite results showed that they were a minority, but even still I can’t believe the numbers weren’t higher than they were.

Has that anti-gay sentiment died down now?

M: There are lobbying groups that still exist, and they still have a lot of money and a lot of power and they’re trying to build up their strength to reverse the decision or make it harder to marry – whether that’s inside a church or religious establishment, whatever – they’re still out there, so I don’t think the country can relax and say it’s all happy days from now on, but there is a sense of relief. I don’t personally know one single person who was opposed to it, out of all of my family and all of my friends. That’s why I found it so hard to believe that these people were out there. Neighbours has a well-established history of iconic weddings, like with Scott and Charlene. Do you hope that Aaron and David’s wedding is going to go down in history in the same way?

T: Well, I hope so! I wish it was for me to say, but I hope so. We’ve put in the work, and I think it’s a beautiful episode and I think people are going to love it. I really hope the audience responds well to it, and I hope this representation continues into the future.

M: Our executive producer Jason put out a memo, maybe it was just in passing, but he said something about the Scott and Charlene wedding and how it’s now time for Aaron and David, and I just couldn’t believe it, I was like, ‘Wow, there’s been so many weddings in between and you’re picking our one?’ It is a big moment, so it does deserve it. I can’t wait to see it when it goes to air.

You can catch Aaron and David’s wedding on Monday 3 September at 5:30pm on Channel 5.