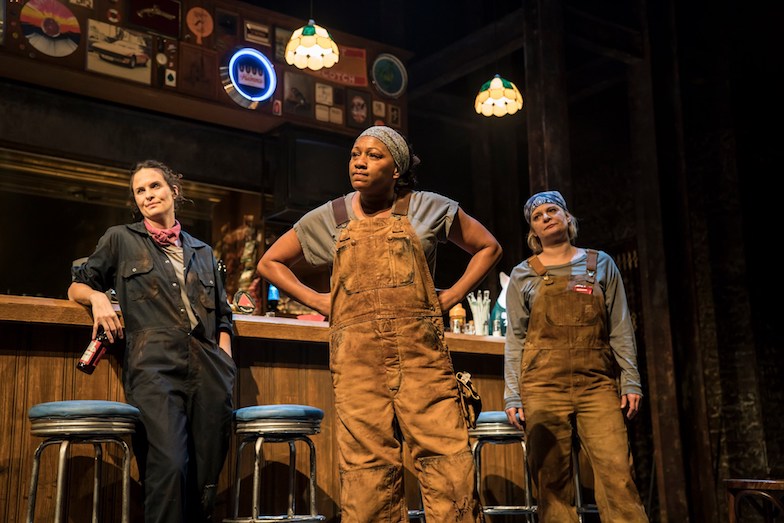 Following a sold-out run at the Donmar Warehouse last year, Lynn Nottage’s new play has transferred to the Gielgud Theatre for a limited run of 50 performances, directed by Lynette Linton.

After its successful 2018 run and a subsequent Olivier Award nomination this year for best new play, Sweat has a lot of hype to live up to. Thankfully, with a combination of impressive writing, impeccable acting and focused direction, this is a play which does not disappoint.

The events of Sweat unfold over a period of several years during the 2000s in a small town in America’s Rust Belt. The narrative is non-linear – each act opens in 2008, showing scenes from the troubled lives of former best friends Chris and Jason who have both recently been released from prison; the action then rewinds and we’re given a few snapshots of the events that led to their current circumstances.

It presents a powerful portrayal of America’s Rust Belt in ruin; over the course of two and a half hours, we witness a society in steady decline. Based on a series of interviews with residents of Reading, Pennsylvania, we see a formerly proud and prosperous community as it struggles to adapt to a new world of automation and cheap migrant labour. For the most part, events unfurl in Mike’s Tavern, where all the factory workers congregate after their shifts. Through their conversations we gain an insight into what’s been happening and how each individual intends to respond.

The play considers some big concepts, most notably surrounding the sense of self worth and identity. The workers of the factory floor display an evident sense of pride at being a part of the industrial heart of the community. For some, that may be because generations of their family have worked there. For others, it could be that gaining a union card made them feel wanted. The factory has become so symbolic of inclusion and value that the Hispanic community now aspires to work there – which we, as observers, can see could well mark the beginning of the end of the factory in its current form.

There may only be a handful of characters but each one is extremely well-written. While there isn’t a weak link in the cast, we were particular fans of Martha Plimpton who impressed as the confrontational and volatile Tracey. She also managed to bring ample physical comedy to her performance without ever overstepping into slapstick. Clare Perkins, who was superb earlier this year in Emilia, also brought a thoughtful, multi-layered performance to proceedings; as Cynthia she was measured and dignified as required, but equally unafraid to get her hands dirty.

Sweat is an incredible achievement. It manages the rare feat of being nimble, fast-paced and entertaining, while still allowing time to pause and reflect on the serious messages at its core. Full of poignant, delicate and difficult moments, it’s a painfully powerful play, with fully-realised characters depicting a genuine desperation as all their life certainties turn to dust. Nothing short of a masterpiece.