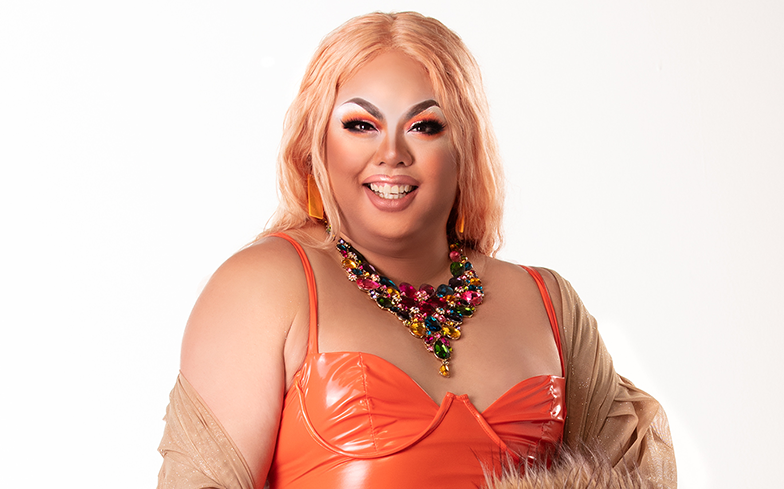 We weren’t ready for Sum Ting Wong to sashay away this early, honestly. Quite gutted, really.

In just four weeks, the Brummie has quickly become a Drag Race fan-favourite thanks to her dry sense-of-humour and emotional backstory; the latter of which has massively resonated with fans, particularly those within the Asian community.

She tells us: “I’ve had 12-year-old kids who come from a very religious background in Birmingham messaging me saying, ‘I’m just like you. I see myself in you. Thank you for sharing your story, because I now know that I’m not alone.'”

This week, Sum Ting took a risk – possibly one of the biggest risks in Drag Race HERstory – when she chose to impersonate (national treasure) Sir David Attenborough for the show’s staple challenge: Snatch Game.

Although her impersonation was eerily accurate and unlike any other character seen before, she was sent packin’ by fellow competitor Crystal after being told by Alan Carr that her weird science, future of drag-inspired runway was “mingin”.

We caught up with the legendary queen to discuss her time on the series, the outpouring of love she’s received from fans and why US performers will think Drag Race UK is “really harsh”.

Hi Sum Ting! How are you feeling?
Hello babe! My new single CrossFire is now available on iTunes and YouTube and to stream on Spotify! The link is available on my Instagram profile [laughs].

It’s a bop! It’s very early noughties pop-R&B, which I love.
With the voice of Brandon Urie! I can’t believe I’ve been given this opportunity, not only to perform on RuPaul’s Drag Race but because of all the support I’ve had. I wouldn’t have been able to release this without everyone’s support and love.

Will an EP or an album follow?
I have an EP coming, a three-part EP that will be available by the end of this year! 20 years ago, if you told me that I would be touring the UK with my own music, I would’ve thought you were lying.

How do you feel about missing Jade Thirlwall next week and the singing challenge?
[Screams] I went on the show, and my forte is singing. I smash singing. I’m good at singing. Give me a singing challenge! The show showcased so many things that I can do, that I didn’t know, do you know what I mean? I didn’t realise that I was funny. It’s weird, when you hear yourself you think, ‘I’m an absolute dickhead.’ I didn’t realise I was funny and I didn’t realise I could make a suit out of blinds! I didn’t realise all these things, and I was walking down the runway in a foam box… walking like a dickhead, thinking I was the queen. It showcased so many sides of me and I was able to share my story, things like that. So… I don’t mind that I didn’t get to the singing challenge, because it showed me so many other things that I can do, that I didn’t even know. I’ve got my single coming out now anyway! You can hear me sing on that! [Laughs]

You came seventh place! That’s a great spot.
I know! I’m the iconic seventh spot. I speak to a lot of the other US girls and a load of them are like, ‘Girl, you’re spot seven.’ I’m like, ‘What does that mean?’ And they’re like, ‘That’s the Alyssa Edwards spot.’ And I’m like, ‘Whaaaat?!’ But yeah there’s so many people in that spot, Alyssa, Shangela I believe, Monét X Change, Trixie Mattel, Tatianna, Joslyn Fox… It’s a weird iconic spot in the Drag Race fandom so I’m just gonna ride this train as long as I can, so: CrossFire, the new single by Sum Ting Wong is out now.

Well then, you’re pretty guaranteed to comeback for All Stars then?
If that is the case, then pack my bags immediately! I don’t know where though, I don’t know if they’d have All Stars in the US or over here, know what I mean? If we do it in Mars… in space, it would be fabulous. But in all honesty, if I get that call – and I don’t know if we will because we’re UK – yes!

I’m hoping they just combine the US and UK contestants rather than a UK-only version.
Imagine if I’m up against my twin Jiggly Caliente? Jiggly put up a picture with Katya and even in the comment she wrote, “Sum Ting Wong looks pregnant.” [Laughs] I love her so much. Some of the US girls have been reaching out and Ongina put up a beautiful post, ‘You’re so loved’ blah blah blah. It made me cry, it was so beautiful. Jiggly messaged me after I was talking about my family and was like, ‘Bitch, you made me cry.’ I didn’t go on to be like, ‘I have to tell all these stories about myself.’ It just happened so naturally and I feel like people saw that. For me personally, as someone who is of Chinese and Vietnamese descent going on a show and talking so candidly about my issues with coming out, it gave representation, which is so important. I’ve had 12-year-old kids who come from a very religious background in Birmingham messaging me saying, ‘I’m just like you. I see myself in you. Thank you for sharing your story, because I now know that I’m not alone.’

I feel like that was the most heartwarming moment of Drag Race UK so far.
I felt like there would never be a point when it would come up in a conversation, organically. But when I was chatting with Vinegar [Strokes], I didn’t realise she had a similar background as me, so it felt like the perfect time to talk about it with her. It was so beautiful that we were able to share that, and it’s so beautiful that so much love and support has come from that. I feel like nothing we’ve ever said on the show is forced, everything has come out really naturally and people can see through that. I’m eternally grateful for it. The reaction has been absolutely incredible. Do I wish I was in the next episode? Yeah, sure, but I couldn’t have paid for a better reception.

I think you cemented yourself as a fan-favourite as soon as you sashayed down the runway in your queen outfit.
[Laughs] My merchandise is available now at sumtingwong.co.uk! Like I said, I’m an absolute dickhead, I generally thought I was going to be in the bottom. When they said I was in the top I was like, ‘WHAT? I’m just a knobhead in a box dressed as the queen!’ They told us to bring a queen outfit abd I was like, ‘I don’t know any of the queen’s iconic looks, all I know is the stamp.’

You could’ve won that, you were so close!
Oh thank you, but The Vivienne did absolutely incredible as well. She looked so much like the queen, it was uncanny. I have nothing but love for her, she’s so talented. I wish her all the best.

How are you feeling today, after watching the episode back?
Really good. It’s like reliving the emotions again. The thing is, I left on such a high. When I saw Geri Halliwell, I cried because she was my idol. You know how you don’t cry at like sad things, but you cry at weddings because they’re so lovely? Geri was saying everything to make me cry, ‘You’re so loved, you’re the embodiment of British drag, you are so warm and so loving.’ Watching it back, I felt all that love again. I could not have asked for a better send off. And I lip-synced to Spice Up Your Life in front of Geri!

Did you expect Geri to visit you after?
Not at all! I wrote my note on the mirror, ‘Okay… let’s go home now, bye.’ I turn around and she was there. I was like, ‘Is this a fucking joke?’ I reckon she snuck out and was like, ‘Guys, I’m going to the toilet.’ She is a true British icon. The Union Jack dress will never be the same.

How did you feel about Alan Carr’s “mingin” comment towards your runway?
[Laughs] The thing is right, I am blissfully unaware and stupid. When I looked at myself front on in the mirror I was like, ‘This… looks… great.’ I don’t check my behind. When I turned round and noticed it, I thought it looked like a red bin-bag. No one’s being harsh for the sake of being harsh. Everyone’s critiquing because they want you to be better. If the queens said, ‘Sum Ting Wong, you look absolutely stunning, you look beautiful,’ I’d be like, ‘Why you lying though?’ In UK drag, that’s how we talk to each other. We want each other to be the best, so we’ll tell you if you look shit. We’ll tell you if your drag is mingin’. That’s how our drag community is, it seems really shady! For example, if The Vivienne didn’t like me, she wouldn’t have said a word. I have nothing but love for The Vivienne and she loves me back. It’s a very UK thing, so when the Americans see it, it comes across as really harsh!

Was there anything on the show that didn’t air that you would’ve liked fans to see?
Yeah, there’s so many but the Snatch Game was so much shorter. There were so many more incredible moments in there that got cut because it wasn’t as good as the other incredible moments. That’s the bit I’m gutted about. We need to see the extended scenes!

You said earlier that being on the show taught you so much about yourself, but what else did it teach you about drag?
With me, I always see drag as a mask. Drag is a persona that you put on, but to be a really great performer, you have to give a piece of yourself. You can’t spend the whole time hiding behind a mask and I feel like the show has shown me that. With all the love and support that I’ve received online, I’ve realised I’m able to be 100% authentically myself and know that people accept that. I’m unstoppable now, purely because I know that people like me? It’s a really weird way to say it, but I feel like I can unapologetically myself. I don’t have to pretend to be someone else. The doors have opened for me to do absolutely anything I want. I say to Ru, ‘You have changed my life forever,’ and she really has.

How do you think Drag Race UK will change the drag scene in Britain?
Instead of everyone tongue-popping, everyone will be calling each other slags. Instead of saying “Yaaas queen!” people will be saying “Much better!” It’ll be, ‘Ooooh me tuppence is out, I’ve flashed me nunnie!’ I can’t wait for young kids to be saying that. Drag Race UK is authentically British, so I think it’s going to highlight just how great our British drag is.

And how do you think Drag Race UK stacks up to the American version?
I genuinely believe Snatch Game was the best episode in Drag Race history. “Much better!”