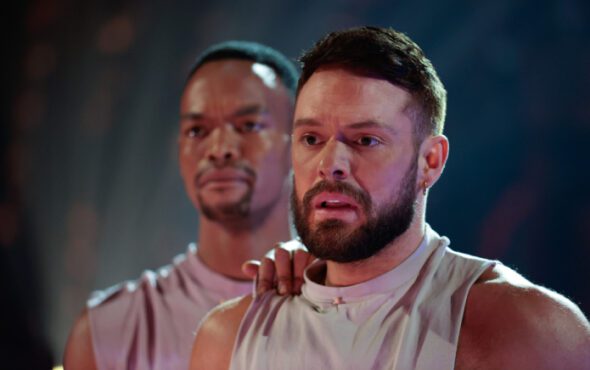 John Whaite has hit back at Strictly Come Dancing viewers who said they’d refuse to watch him in the upcoming final.

On Sunday (12 December), the former Bake Off winner landed a coveted spot in the final three with partner Johannes Radebe, making history in the process as the first all-male couple to do so.

Whaite and Radebe were voted through to the final after competing against Rhys Stephenson and his partner Nancy Xu in the dance off.

They won by a landslide, with all four judges – Craig Revel Horwood, Shirley Ballas, Motsi Mabuse and Anton Du Beke – unanimously choosing to save them both from elimination.

Following the episode, Whaite took to Instagram to celebrate his and Radebe’s historic victory, but was later forced to defend himself against anti-LGBTQ+ trolls who said they “won’t be watching the final” because it’s “fixed” and their partnership is “not natural”.

“You vicious, empty people are a dying breed,” wrote Whaite. “You’ll be left behind as the world becomes kinder, more empathic, more loving, more tolerant, more understanding. The only grievance you should feel is your own failure to evolve.”

The 32-year-old was met with overwhelming support from fellow Strictly alum such as Adam Peaty, Aj Odudu, Dan Walker and Denise Van Outen.

“NOONE CAN DIM YOUR LIGHT,” said Ododu. “You are loved. Fact.”

Dr Rahul Mandal, 2018’s winner of The Great British Bake Off, responded to Whaite: “Always remember you are amazing and there are thousands of people who love you… love you both… and you know what… Love always wins!” On 13 December, Radebe spoke with BBC Radio 2 presenter Zoe Ball about the amount of hate he’s been inundated with since landing a place in the final.

“You know John and I have had wonderful messages but also we’ve had flack, Zoe – and that’s the truth. People calling us going into the finals ‘woke’ and ‘this is the BBC’s agenda’. But I have to say, we knew it was coming, we didn’t go into this blindly at all,” Radebe admitted.

“We knew with our actions people’s lives would be changed and I can’t tell you how proud I am of John. I’m so proud.”

Despite the hate, Radebe said he has no regrets about the partnership, adding: “This is the reason why Zoe, me and John have said yes to this moment, we knew it does change people’s minds. I’m so glad that it did. As you can imagine, this is my artistry.”

Whaite and Radebe received widespread acclaim for their latest routine, which they dedicated to the LGBTQ+ community. The couple performed their Couple’s Choice Routine to Adele’s Hometown Glory and received a score of 39/40.

Before the performance, Whaite revealed that he first opened up about his sexuality to his schoolteacher, who subsequently outed him to his parents. “‘My family first learned that I was gay when I was about 14, 15 years old,” he told viewers.

“I confided in a teacher at school, and the teacher told my family, which I was not prepared for.”

Whaite continued: “When I was younger, I was bullied a lot at school for being too campy, and my sisters didn’t put up with it. Having them on my side counterbalanced every word of hate.”

They dedicated their dance to “the people who may feel a little bit afraid in life,” promising that “it does get better”.

You can watch Whaite and Radebe’s routine to Hometown Glory here or below.