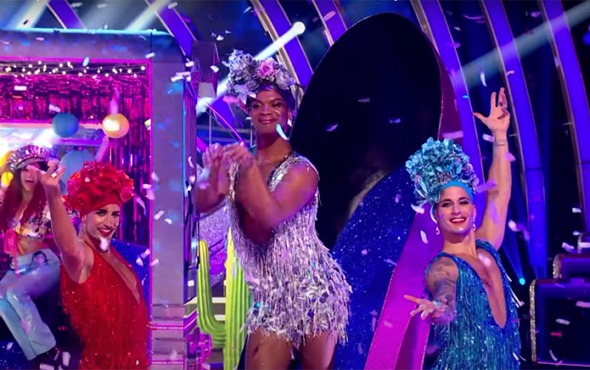 Snatched is an understatement!

The trio took the stage for a 70’s inspired routine that was inspired by the Pricilla, Queen of the Desert musical.

It quickly turned into a disco extravaganza when Johannes, Gorka, and Giovanni stepped out in full drag to perform a dance routine to a musical medley of CeCe Peniston’s Finally and Peaches & Herb’s Shake Your Groove Thing.

The trio and their legendary performance were met with immediate praise from viewers.

One Twitter user said: “Unbelievable Johannes is just amazing! To the 100 odd people that want to write complaints, save yourself the energy, and accept that you just wish you could strut in heels like they just did…”

Strictly Come Dancing has made massive moves in LGBTQ+ inclusion this year.

Olympic double-gold medalist Nicola Adams was partnered with Katya Jones for this year’s series, which was the first same-sex pairing of the show.

Last year, audiences were treated to a heartfelt performance from Johannes and Graziano Di Prima, which brought the conversations about inclusivity and acceptance to viewers.

Even though massive strides have been made on the show, some fans have expressed their anger over same-sex pairing, with over 100 complaints being made before the show even premiered.

The BBC released a statement shutting down the complaints stating: “Strictly Come Dancing is an inclusive show and is proud to have featured same-sex dancing amongst the professional dancers in group numbers in the previous series.”

They came, they slayyed and DELIVERED!

Watch the full performance below.

To the 100 odd people that want to write complaints, save yourself the energy and accept that you just wish you could strut in heels like they just did…