Strictly Come Dancing 2019 returns with a splash of Kylie magic 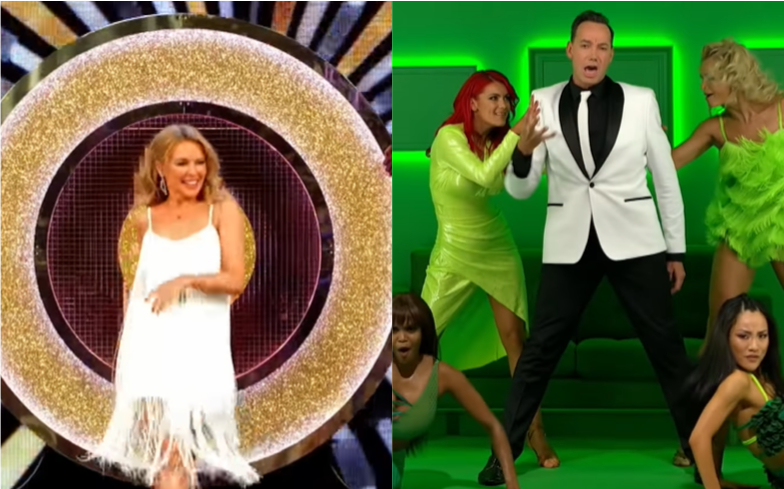 Strictly 2019 has launched with an explosion of glitter.

The waiting is practically over now that Strictly 2019 has launched. While the government around us collapses like a house of cards, at least we can relax on Saturday nights, and just watch some nice celebrities dance (at least presumably in some cases) and forget about all the chaos.

The launch show started with all of the usual glitz and glamour, before pop princess Kylie Minogue was spun around in a massive gold glitterball, to provide us all with a medley of some her greatest hits like Love at First Sight, Better the Devil You Know, All the Lovers and fittingly enough Dancing.

Other highlights from the launch show had all four judges take to the floor to an extended Latin marathon. Shirley showed off all of her twirls, Craig looked like a dancer on a mission, and new judge Motsi Mabuse outshone practically everyone. However, Bruno didn’t really live up to expectations, looking a little clunky in some areas, but given last year’s shadefest at least we know he still has both his hips.

The other pro dance to Beyoncé and Rag’n’Bone Man was as stunning as any professional dance is, with the start having a very burlesque feel to it. The only problem with the pro dance is we had a brand new pro, Nancy Xu, and despite seeing her flung around like a rag doll in the arms of the male pros, we barely saw anything of her.

Of course the main event was the celebrity pair ups. And despite already having them, Michelle Visage stole our hearts all over again when in her introduction she spoke about the sense of belonging that we all long for. Can she just pick up the Glitterball trophy already?

As predicted, the vast majority of predictions feel completely by the wayside, with the only correct pairings we got was AJ Pritchard and Saffron Barker, which was the most obvious potential pairing, and the Viscountess Emma Weymouth being paired with Aljaž Skorjanec, which was a bit more of a longhshot.

There were several surprises in the pair-ups like Catherine Tydelsey with Johannes Radabe, Emma Barton with Anton du Beke and Karim Zeroual with Amy Dowden.

It looks like footballer Alex Scott and CBBC presenter Karim are the two dancers to beat at this current moment in time, with both looking like they were moving effortlessly across the floor. Saffron, Catherine and Emma Barton also seemed to have some good moves, while Viscountess Emma Weymouth did better than I’d thought.

However, it was pretty clear that Mike Bushell doesn’t have a chance, while David James and James Cracknell also seemed very stiff and lackluster in their movements. Sadly, Michelle didn’t feature much, but her part was iconic as she attracted AJ and Giovanni before pushing them away.

Jamie Laing had all the right energy, but as well know he has to withdraw from the show due to a foot injury. The Made in Chelsea star has since been replaced by Emmerdale’s Kelvin Fletcher, who played Andy Sugden in the ITV soap for 20 years. However, as we haven’t seen him on the dance floor, it’s impossible to guess how well he’s going to do.

And you can watch the Strictly celebs take their first steps on the dancefloor here.

Strictly won’t be back now until 21 September, but there is a special show next week celebrating the professional dancers.