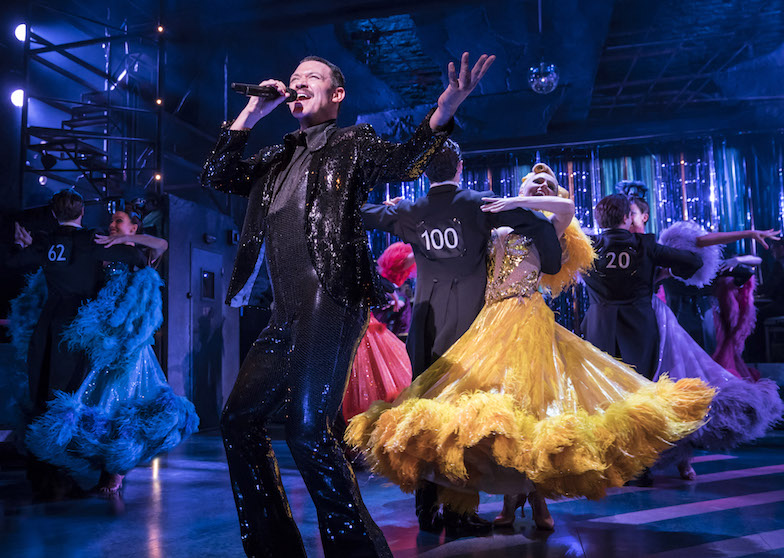 Baz Luhrmann’s musical, starring Will Young in a newly-created MC role, has opened at the Piccadilly Theatre.

Based on the 1992 film of the same name, with a book by Baz Luhrmann and Craig Pearce, Strictly Ballroom tells the tale of rebellious dancer Scott Hastings (Jonny Labey, winner of ITV’s Dance Dance Dance). Determined to succeed at the prestigious Pan Pacific championships using his own non-regulation moves, he partners up with the initially frumpy Fran (Zizi Strallen) who, unsurprisingly, turns out to be a talented and beautiful dancer when she removes her glasses, lets her hair down and loses her inhibitions.

It’s a plot as simple as it is predictable. We’d worked out where the narrative was headed in the first few minutes, then spent the remaining two hours watching exactly what we were expecting to see play out before us. Thankfully, Strictly Ballroom has enough audio and visual flair to ensure we were never bored. Indeed the show’s main strength is the quality of the footwork, underscored by some impressive music.

Choreographer Drew McOnie has cooked up a beautiful spectacle – it’s quite the visual feast. Embracing an impressively broad range of styles, the footwork is tight, technical and frequently dazzling. The costumes – while bright and sequinned to the point of garishness – work well in the context of the routines, create a kaleidoscope of colour which fits the show perfectly.

The music impresses, too. Will Young, writhing his way around the stage in a sequinned catsuit, takes on a master of ceremonies role as the newly-created Wally Strand. He provides some narrative between scenes with a questionable Australian accent but thankfully shines as a performer. While he doesn’t join in for too many of the technical routines he still throws some impressive shapes and his singing is, of course, wonderful. We particularly enjoyed his tender rendition of Time After Time, but that was just one of many highlights.

Unfortunately Strictly Ballroom is a show which lacks any real substance. While the leading pair are perfectly likeable, the remaining characters are almost entirely one-dimensional caricatures who play their roles exclusively for laughs. In doing so, the majority of the scenes feel like they’re trying way too hard to be funny, resulting in very few genuinely amusing punchlines. Of particular note we thoroughly disliked the president of the dance society – with an orange face, ill-fitting toupee, inappropriate advances on young women and jokes about quitting media to take up politics, he’s the most thinly-veiled Trump we’ve seen in quite some time.

It’s a shame as Strictly Ballroom has many of the ingredients of a great show. It’s a technical marvel, with impressive choreography, a slick set, great singing and a wonderful backing band. The leading pair are engaging and the plot is serviceable enough – albeit stretched rather too thinly across more than two hours. Unfortunately, while being a feast for the eyes and ears, it’s a show which lacks any real depth or substance. It all looks and sounds very nice but there’s little else here to recommend.