Strangers In Between is a witty coming-of-age tale – review 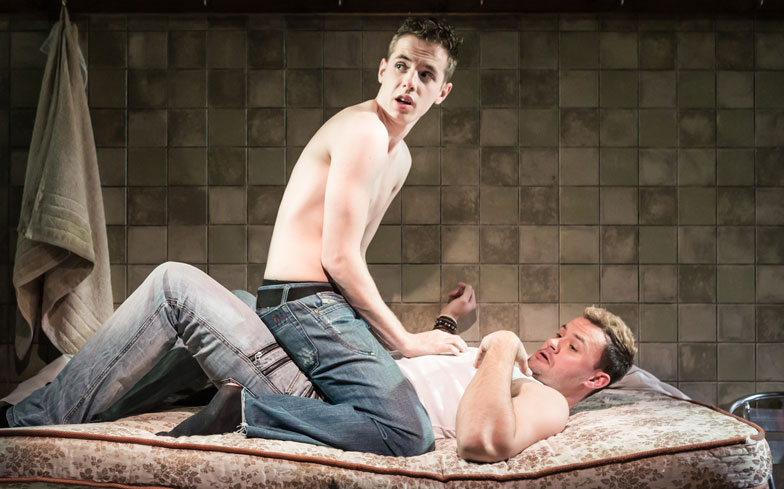 The King’s Head Theatre production has transferred to the cosy Trafalgar Studio 2 for a limited run.

Set in King’s Cross – the one in Sydney, not London – Strangers In Between follows the story of teenager Shane, who has moved from his rural hometown of Goulburn to start a new life in the big city. During the opening scene – set in Shane’s place of work, an off licence – we are introduced to the play’s other two lead characters, dreamboat party boy Will and the older, wiser and wonderfully witty Peter.

Strangers In Between is predominantly a story of Shane’s self-discovery; he is in turn likeable and detestable as he battles his various demons, from his internalised homophobia to his complex family relations. Over the course of the play, as we learn more about him, his nervous disposition and confused outlook start to make more sense, especially with the arrival of his brother Ben. There are some uncomfortable moments, but they help us understand why relationships have become so strained back home and why Shane has attempted to forge a new surrogate family in Sydney.

The play’s real strength is in the depth of the writing – there are no one-dimensional characters here and we thoroughly enjoyed getting to know each individual. There are no lazy stereotypes, either – yes Peter may be quite camp, but his witty sense of humour and matter-of-fact outlook led us to warm to him immeasurably. His relationship with Shane – which could so easily have been portrayed as a bit seedy – is instead wonderfully sensitive and caring.

We had a couple of minor qualms, but nothing which detracted from our enjoyment of the show. We felt Shane’s nervous disposition was over-exaggerated throughout – given how intimate the studio theatre is, this could have been toned down substantially and we’d have still got the idea. We also thought the interval wasn’t entirely necessary – it’s a fairly short play we felt the break disrupted the flow somewhat.

However, these are minor concerns in an otherwise very impressive show – Strangers In Between is a witty coming-of-age tale full of characters and situations which many will find entirely relatable. It’s a tender, warm and funny play, full of hidden depths – one we’re happy to recommend.

Gay Times gives Strangers In Between – ★★★★☆