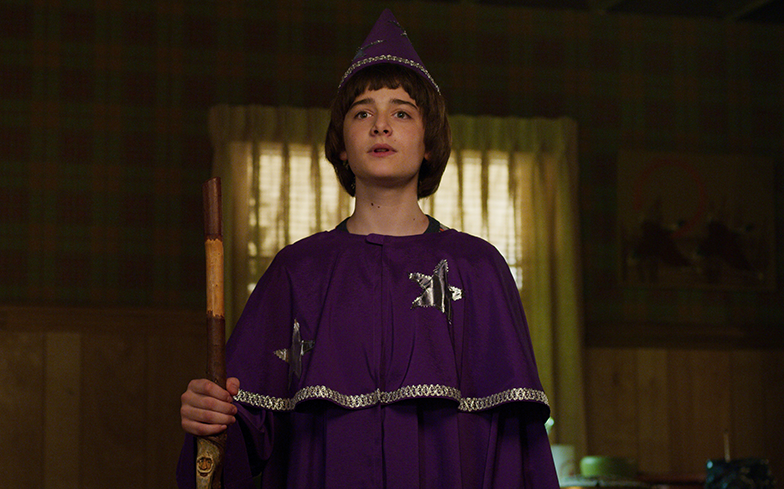 “He wasn’t ready to face this maturity.”

Noah Schnapp has addressed whether his Stranger Things character could be gay.

In the third season of the critically-acclaimed Netflix sci-fi series, it was rumoured that his character, Will Byers, was closeted and a future LGBTQ icon after a scene in which he argues with Mike (Finn Wolfhard) over his girlfriend.

After Will storms out, Mike follows him and tries to make amends, before shouting at him: “It’s not my fault you don’t like girls!” Will is visibly upset with Mike’s comment, but after this, it’s never spoken of again.

In a recent interview, Schnapp said: “Some people perceive it as Will could be gay, asexual or whatever. How I see it, he was stuck in the Upside Down and he was away for so long that all of his friends started growing up while he was in this other world.

“When he came back, everyone was all grown up, and he was still a little kid who still wanted to do little kid things like play D&D. He wasn’t ready to face this maturity and get into relationships. I think that’s what Will is going through right now.”

Schnapp also said he’s read the “first four scripts” of the show’s upcoming fourth season and described them as “amazing”.

The first trailer for the highly-anticipated season was unveiled last week and revealed the return of Jim Hopper (played David Harbour), who was believed to be dead after the events of the third season finale.

In a statement, series creators The Duffer Brothers wrote: “Although it’s not all good news for our ‘American’; he is imprisoned far from home in the snowy wasteland of Kamchatka, where he will face dangers both human… and other.

“Meanwhile, back in the states, a new horror is beginning to surface, something long buried, something that connects everything. Season 4 is shaping up to be the biggest and most frightening season yet.”

Watch the first trailer for Stranger Things season four below.