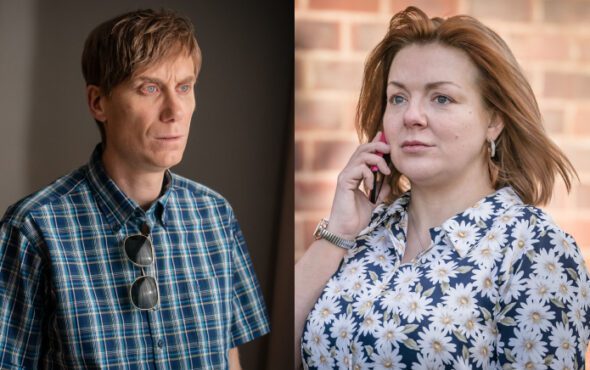 The BBC has released the first trailer for Four Lives, a three-part drama depicting the harrowing murders of ‘Grindr killer’ Stephen Port.

Directed by David Blair and written by Neil McKay, the series will tell the story of Anthony Walgate, Gabriel Kovari, Daniel Whitworth and Jack Taylor, who were all murdered by Port between 2014 and 2015.

In 2016, he received a life sentence with a whole life order, meaning he will die behind bars.

Utilising “extensive research and multiple sources” to ensure the series is as accurate as possible, Four Lives stars Stephen Merchant as Port and Sheridan Smith as Sarah Sak, the mother of the late Walgate.

Sak later wrote a book about her son’s death, A Life Stolen: The Tragic True Story of My Son’s Murder, which is due for release February 2022.

You can watch the first trailer here or below.

Last week, an inquest jury concluded that failings by the police during the investigation of Walgate’s killing “probably” contributed to the deaths of Port’s next two victims, Kovari and Whitworth.

The jury stated there were “fundamental failings in these investigations from the beginning” when it came to inquiries made by officers in Barking and Dagenham into Kovari and Whitworth’s deaths.

The panel also determined that errors in the investigations into the aforementioned victims “probably” contributed to the killing of Taylor, Port’s final known victim, as he continued to be free and therefore able to kill.

The “heavy workload” of officers was acknowledged in the written conclusions, though it was explained that the failures “cannot be overlooked”.

At Barking Town Hall, Coroner Sarah Munro QC said: “These inquests have, on any view, raised a number of serious concerns.”

Peter Tatchell, a human rights advocate, accused the police of “institutional homophobia” and called for the officers involved to face disciplinary action.

“Evidence given at the Stephen Port inquest revealed the police to be incompetent, negligent, unprofessional and homophobic,” he said.

“Every gay person who expressed concerns about the deaths was ignored, dismissed and treated with contempt, even the partner of one of the victims. That’s institutional homophobia. The officers involved must face disciplinary action.”