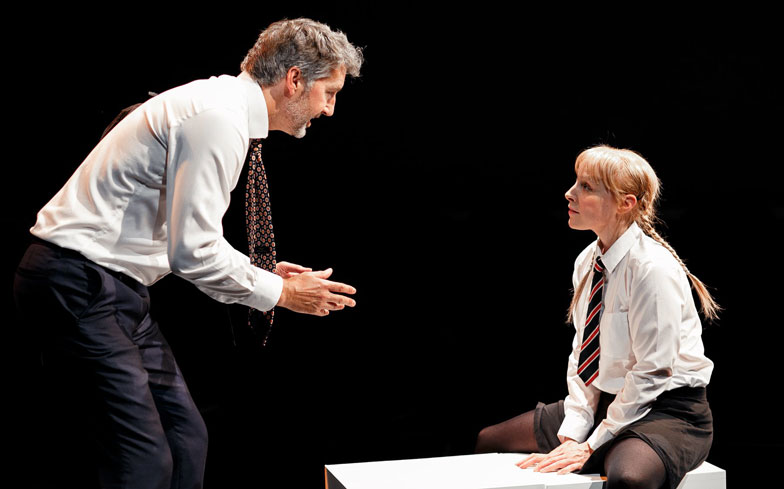 The new play by Abigail Hood has received its world premiere at the intimate studio space Park90.

Spiral has quite an unconventional narrative. It focuses on the lives on Tom and Gill, who are struggling to cope with the mysterious disappearance of their teenage daughter, each finding their own coping mechanisms. While Gill resorts to wine, religion and generally attempting to block out the rest of the world, Tom decides to book an escort, Leah. The relationship between Tom and Leah develops over the course of the play, which subsequently affects those nearest to them both.

It tells a compelling tale. While we figured early on that this was unlikely to be a straightforward narrative with a happy-ever-after ending, there were numerous unexpected encounters and a handful of twists which moved the story in directions we weren’t expecting. There were some extremely engaging moments, too – Spiral certainly keeps the audience interested and provokes a reaction. A handful of scenes, including Tom and Leah’s initial meeting, and some exchanges between Leah and her abusive on-off boyfriend Mark, were uncomfortable to watch – and yet we couldn’t look away.

While we found the quality of the writing consistently strong, we weren’t as convinced by the acting. Although there wasn’t a weak link, we only really felt that Tracey Wilkinson shone throughout. Hers was a highly believable and naturalistic performance, nuanced and multi-layered from her first scene through to the finale.

We did also have a couple of other concerns. The Park90 is a unique studio space which we felt wasn’t exploited to its full potential. With such a close proximity to the audience, and with the play being performed almost in the round, we felt there were opportunities to take advantage of the set up – yet Spiral is performed as conventionally as if it were staged in a proscenium arch. We also felt the production wasn’t as slick as it could be – many of the scene changes overstayed their welcome, and it felt unnatural to watch the actors break character and rearrange the furniture for such prolonged periods of time.

In spite of these issues we still thoroughly enjoyed Spiral. It’s not perfect, but it still tells an interesting, engaging and unpredictable story in a clever way, and features some moments of great acting. In spite of a handful of a issues we’re happy to recommend a trip to the Park Theatre – Spiral is well worth checking out.