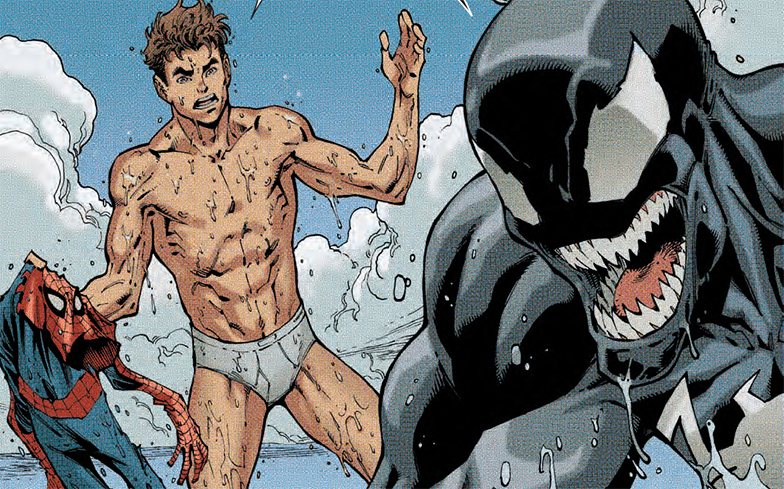 Fans are living for this homoerotic moment in a new Marvel comic.

The scene came in issue two of Cosmic Ghost Rider: Destroys Marvel History, in which the titular character attempts to rewrite history and promises to “destroy” childhood memories of your favourite Marvel superheroes.

For Spider-Man, Cosmic Ghost Rider tells the story of a beach fight between the web-slinging hero and his symbiote nemesis Venom, which featured an interesting verbal exchange between the iconic characters.

“You want me? Then take me! I’m yours!” says Spider-Man in the scene, which sees him rip off his suit.

“What’s going on here? We feel like the fight has taken a turn,” responds Venom. Spider-Man continues: “You wanted to be part of me! Well, now I want you! Come and get me!”

Venom, who also loses his suit revealing a pair of black briefs, replies: “Noooo! I’m going to pound you so hard for this, Spider-Man!”

If you’re wondering, no, it’s not just your mind that went there. Following the exchange, a nearby fisherman jumps into the pair’s conversation: “Really?! Are you hearing yourselves?”

The moment got a great response from fans, with one writing: “Well????? I’m waiting for venom to pound Spider-Man”

For Spider-Man, this certainly isn’t the first time he’s found himself in a raunchy situation with another male superhero. His friendship with Deadpool has been riddled with flirting attempts by the pansexual antihero. Cosmic Ghost Rider: Destroys Marvel History #2 was written by Paul Scheer with art by Nick Giovannetti and was released 3 April, and is available to buy here.