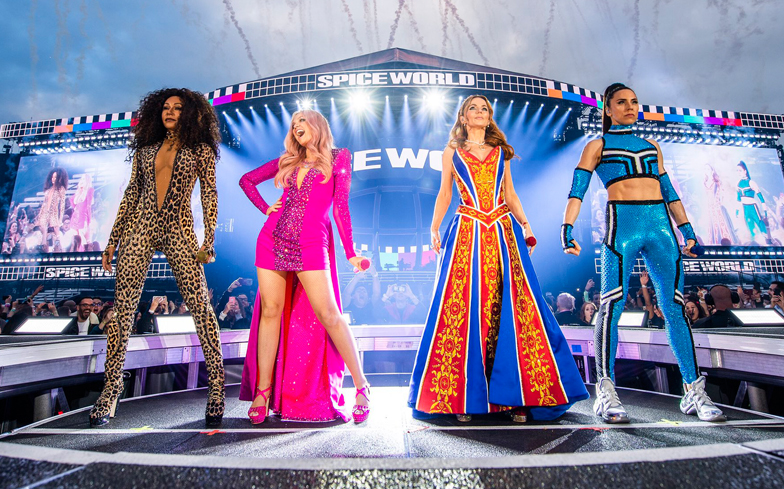 While stood in the centre of Wembley Stadium on a dusky Friday evening – fireworks bursting up above and music blasting all around – a wig landed right in front of our feet.

The Spice Girls had just emerged on stage to kick start their sold out Spiceworld 2019 show and the hysteria is so incredible that Baby Spice-styled pigtails have been launched into the sky by an excited fan. Wigs are – quite literally – flying. It’s the second of three sold-out nights at the iconic London venue, which can pack in approximately 80,000 fans. Tickets sold in mere moments earlier this year proving that, 25 years after they very first formed, the Spice Girls are as popular as ever.

The road to this moment over the past few years, however, hasn’t been so certain. There has been plenty of discussion that a Spice Girls reunion without one of the members wouldn’t be considered legitimate. At one point, we were faced with the prospect of a string of summer shows with just three of them, but thank the pop heavens above that never became a reality. RIP Spice Girls GEM. Gone and very quickly forgotten.

But when Geri Horner, Mel B, Melanie C and Emma Bunton decided that they would push forward with a new show without Victoria Beckham, of course there was still going to be some trepidation from fans. We like things to be perfect and complete. If we can’t have it the way it was, we don’t want it at all. What we sometimes forget though, is that the true spirit of Spiceworld lies within their music and the connection we all have to it. Nostalgia is a powerful emotion, and when it comes to the Spice Girls it often feels even more concentrated than usual. Spiceworld 2019 really plays on this in the best possible way – and does so incredibly successfully.

For a start, the fact that each Spice Girl has their own troupe of dancers dressed in their ‘house colours’ refreshes and reinforces each member’s iconic persona. Scary glitters in leopard print as her troupe strut with her around the stage. Ginger has an updated take on her Rule Britannia regality with military inspired costuming. Sporty’s futuristic leisurewear complements her high energy, and Baby is decked out in pastel pink of course. These reimagined visual identities are both fitting for the group at this point in their career, but immediately familiar.

While their personalities are a little more reserved these days (well, apart from Mel B), their on-stage chemistry is as palpable as ever. The connection they have as a group is incomparable, and the fact it still stands strong all these decades later is a testament to their friendship.

Then there’s the music. From Spice Up Your Life and Say You’ll Be There, to Viva Forever and 2 Become 1, they have a back catalogue of sugary pop hits that define a decade. The 90s may be a distant memory now, but every member of that audience was transported back to simpler times for a few hours. Even album tracks like Do It, Never Give Up On The Good Times, and The Lady Is a Vamp had thousands singing along, proving the enduring appeal of their second studio album, Spiceworld. For those of you old enough to remember the suffering Geri’s departure caused you as a child, you would never have imagined one day seeing Ginger Spice actually singing a verse in Goodbye. But here she is apologising for leaving the band in the first place and hugging her bandmates as they get through their most emotional ballad.

By the finale, we’ve seen that pigtailed wig fly through the sky at least six more times, which will give you a sense of how brilliant it has all been. The four girls are stood in front of a packed Wembley Stadium 21 years after they last headlined there. There’s just one song left – arguably the biggest of them all – and to once again evoke that sense of nostalgia, they have refreshed versions of the outfits they wore in the Wannabe music video. Melanie C’s shimmering tracksuit poppers are genius, Baby’s glittering pink platform trainers need to be made available to purchase immediately, Mel B looks glorious in her green two-piece, and we’re pretty sure Geri is wearing the actual original outfit from 1996. Whatever the case, the crowd go wild for it all, ending the pop spectacle on the highest note possible.

But as the girls say their goodbyes, the overall sense is that Spiceworld 2019 is such a triumph that it doesn’t feel like a one-off reunion, but rather a return. The show proves that four of them together can carry a pop experience that remains true to the Spice Girls legacy. We love VB – don’t get us wrong – but Spiceworld 2019 has shown that the Spice Girls can exist exceptionally successfully as a quartet.

Mel B has already teased the prospect of international dates, and when we spoke to Emma earlier this year she said that more shows down the line is something the girls have spoken about. Considering the reaction to these shows, and the outpouring of love for the group, we suspect it will be more of a ‘when’ rather than an ‘if’. And let’s face it, with the world being generally a bit shit at the moment, getting to visit Spiceworld on a more regular basis sounds like the perfect antidote.