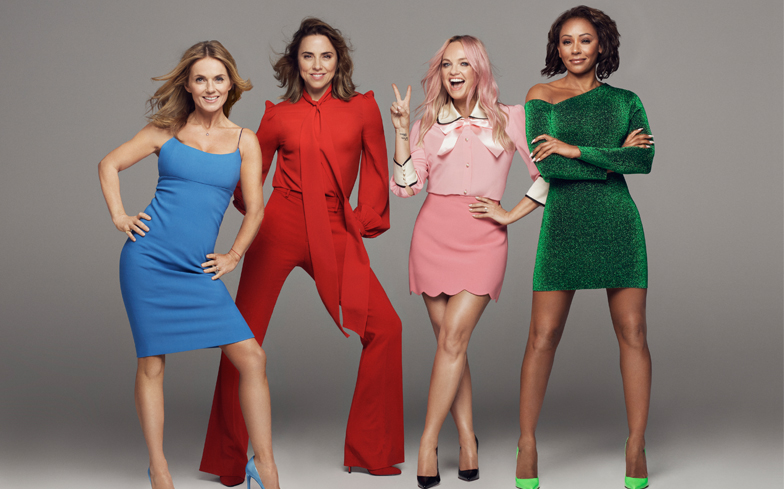 After years of speculation, a brief period when it looked like Spice Girls GEM was going to be a thing, and about thirteen zillion interview appearances from Mel B promising an announcement “soon”, it’s finally here: the Spice Girls are getting back together.

Geri Horner, Mel B, Melanie C, and Emma Bunton will embark on a huge stadium tour next year, pulling out all of their classic hits once again.

However, as you may have noticed from that line-up, Victoria Beckham will not be joining them for the shows.

Posh Spice will instead focus on her fashion business, which has been at the forefront of the British fashion industry for more than a decade now.

In a Breaking Spice News broadcast on social media this morning, the four Spices – Baby, Ginger, Scary and Sporty – confirmed six headline dates in stadiums across the UK.

The run will include a huge show at London’s iconic Wembley Stadium on 15 June.

“It’s time to spice things up all over again! I can’t wait to perform to our forever supporting fans and a whole new spice generation! Love you all!” said Emma.

“I’ve said it sooo many times I’m beside myself it’s actually happening yipppeeee. I’m now properly screaming it from every rooftop – me and my girls will see you all on stage!” Mel B added.

“Reminiscing with the girls about how much fun we had, made me feel like it was the right time to do it all over again!” said Melanie C.

“I am so excited, together we celebrate girl power with our fans and the next generation and everyone is welcome! Hold tight it’s gonna be fun,” Geri said.

As for Victoria, she added: “Being in the Spice Girls was a hugely important part of my life and I wish my girls so much love and fun as they go back on tour, I know they will put on an amazing show and the fantastic fans past and present are going to have a wonderful time!”

The full dates are as follows:

Tickets will go on sale from 10:30am this Saturday 10 November.

The release of tickets will coincide with the four-piece’s first television appearance together to talk about the reunion on The Jonathan Ross Show that evening.

This will be the first Spice Girls tour to take place since their last reunion shows back in 2007-2008.

Their manager Simon Fuller is back at the helm helping them mastermind these stadium dates for next year.

As we all know, this isn’t the first time the Spice Girls have operated as a four-piece.

They continued for two more years with a member down following Geri’s departure back in 1998.