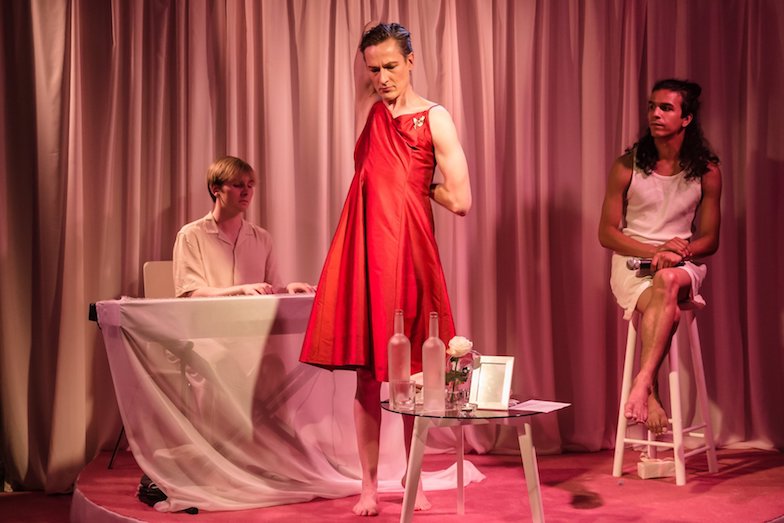 Southern Belles revives two seldom-performed plays by Tennessee Williams – Something Unspoken before the interval, followed by And Tell Sad Stories of the Deaths of Queens. While each show may portray a very different same-sex relationship, similar themes such as power and manipulation are explored in both – as such, they make for a complimentary pairing.

First up is Something Unspoken, which focuses on the story of the wealthy Cornelia (Annabel Leveton) and her secretary of 15 years, Grace (Fiona Marr). It’s the less exciting of the two plays, but we still relished in the intelligent script, dripping with subtext. It focuses more on what is unspoken rather than what is actually said; while the pair evidently entered into a co-dependent relationship some time ago, Grace certainly doesn’t seem open to the idea of defining their exact situation, as Cornelia tries repeatedly to raise the topic in conversation.

It’s never made explicit why Grace spurns Cornelia’s advances to be more open about the nature of their relationship. Perhaps she is bound by a sense of duty towards her employer, or maybe she cares about her boss’ potential reputational damage – or simply she’s trying to protect herself. It’s intriguing to observe how the two actors interact, and both turn in commendable and believable performances in this brief but thought-provoking two-hander.

And Tell Sad Stories of the Deaths of Queens is an excellent piece of theatre, one which makes us question why it’s not performed more frequently. Never staged during Williams’ lifetime due to the openly gay characters it portrays, it tells the tale of self-proclaimed transvestite interior designer Candy (Luke Mullins) who has picked up sailor Karl (George Fletcher) in a gay bar in New Orleans. Candy also owns the flat upstairs from his own, which he rents to a young gay couple Alvin (Michael Burrows) and Jerry (Ben Chinapen).

Luke Mullins is quite frankly wonderful in the lead role. As Candy he is utterly captivating – initially calm and collected, we see this fragile facade eroded by the volatile and aggressively homophobic Karl. Candy also employs the use of deliciously devastating one-liners as a defence mechanism, which provide some much-needed humour in a play which had the potential to be otherwise relentlessly bleak.

Given the material contained here, it’s remarkable that both plays were written in the 1950s. That so much of the content feels so interesting and relevant, particularly in the second show, is testament to just how far ahead of his time Tennessee Williams was when it came to writing LGBTQ+ theatre. Southern Belles may not be a perfectly balanced production – the second half is clearly stronger than the first – but both plays impress in their own right, and as a package it makes for a powerful, amusing and thought-provoking experience.