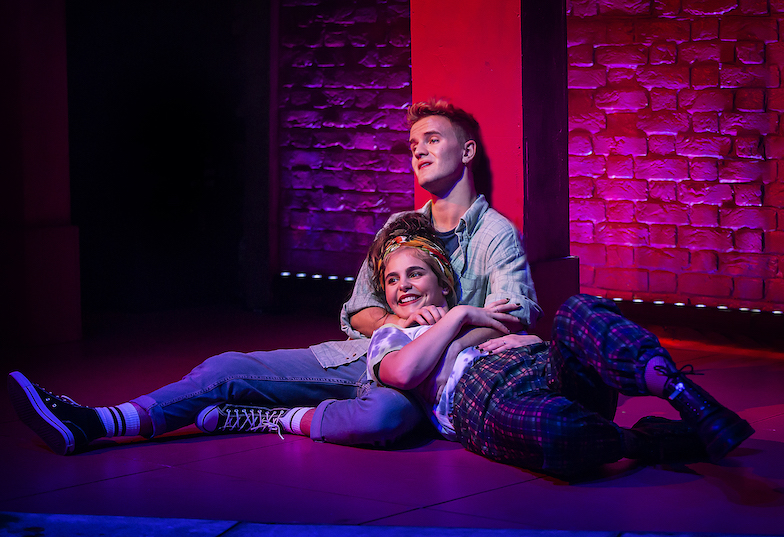 Stiles and Drewe’s 2011 musical has opened at the Charing Cross Theatre, in a new production directed by Will Keith.

On paper, Soho Cinders sounds like it’s going to be right up our street. A modern adaptation of the Cinderella fairytale, reimagined on the streets of Soho, featuring a gay romance. What’s not to love? Sadly, it all just feels rather dated and predictable. We can see how this may have been quite exciting when it first opened – but in a world where Everybody’s Talking About Jamie is a West End staple, and in a year which has seen great new LGBTQ+ musicals such as Leave to Remain and The View UpStairs open in London, there’s nothing in Soho Cinders that we haven’t seen done better elsewhere.

It misfires on many fronts. First of all, it over-complicates matters – there are a handful of nods to the original Cinderella story, which work reasonably well. Our protagonist has two mean-spirited sisters; he attends a ball which he leaves at midnight; a lost mobile phone takes the place of a lost shoe. So far, so good. But it then throws in a sub-plot about inheritance, a missing will and potential eviction. That’s before we get to the complex love triangle at its core – the protagonist is caught between a closeted mayoral candidate (who has a fiance) and a wealthy lord (who happens to be the candidate’s main financial donor).

We could forgive the plot’s shortcomings if the songs and book were great, but unfortunately that’s not the case either. Many of the characters – most notably the two step-sisters – are built around lazy stereotypes. The narrator part, we assume, is there to set up each scene with a witty observation – but the punchlines range from mildly amusing to just plain not funny. The songs, too, feel a bit too safe – they mostly seem from the cookie-cutter mould of musical theatre cliches. Wishing For The Normal has a nice sentiment, and They Don’t Make Glass Slippers a great melody, but nothing else stayed with us.

Our main concern was that the tone of the musical completely missed the mark. It feels like it’s trying to be contemporary and exciting, but many of its lines feel extremely dated. The idea that hero Robbie (Luke Bayer) and his friend Velcro (Millie O’Connell) – who are representing the youth voices in Soho – would discuss Liza Minnelli or Barbra Streisand as their cultural reference points on a night out seems a bit of a stretch. There’s a song which refers to a man wearing a wedding ring as evidence he’s married to a woman – which may have been the case when it was written, but certainly needs refreshing for 2019.

We could go on with a list of issues – there are many – but one more worth highlighting is the complete lack of diversity. The cast is almost exclusively white, which makes it quite ridiculous when, in the play’s own words, the mayoral candidate’s campaign team visit Soho to canvass a more diverse voter base – we the audience can see a total absence of people of colour. That the play’s entire representation of the LGBTQ+ community is three white men just feels completely tone deaf in 2019, and not representative of London at all.

Soho Cinders isn’t completely without redeeming features. Given the limitations of the Charing Cross Theatre, the production values are actually very high. The simple set is used effectively, there are some impressive lighting effects and the band sounds great. The acting is generally fine and there are some strong vocal performances, including an amusing and technically-impressive operatic ad lib moment. It’s just a shame that the songs and book, in spite of only being a few years old, already feel dated – Soho Cinders needs a significant overhaul in order to feel contemporary again.