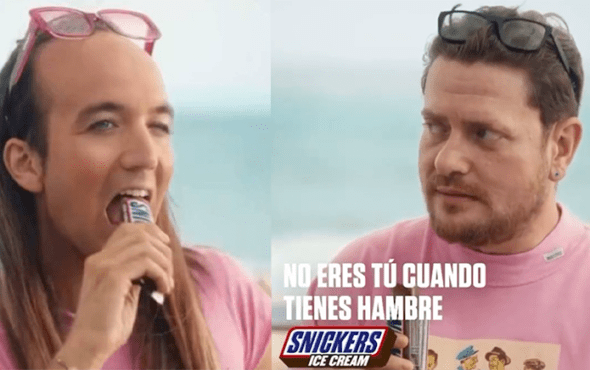 Snickers Spain has stopped running a 20-second advert after it was widely criticised for being “homophobic”.

Snickers has apologised after pulling an advert that has been condemned for being insensitive to the LGBTQ+ community.

The Snickers advert, which features popular Spanish influencer Aless Gibaja, sees Gibaja at a beach bar with a friend while being served by a waiter.

Gibaja orders a “sexy orange juice with vitamins A, B and C” and the waiter serves him a Snickers ice cream bar and he is suddenly transformed into a bearded man with short hair and a deep voice.

Gibaja’s friend then turns to him and goes ahead and asks if he is feeling better to which he replied “better”. Shortly after the interaction, the Snickers tagline runs across the advert reading: “You’re not yourself when you’re hungry.”

The advert was met with backlash soon after it aired for the homophobic message it portrayed.

“It is shameful and unfortunate that at this point there are companies that continue to perpetuate stereotypes and promote #homophobia and #plumophobia . If you need some training for next time, here we are, #Snickers .

“The State Federation of Lesbians, Gays, Trans and Bisexuals posted a tweet addressing the advert: “It is shameful and unfortunate that at this point there are companies that continue to perpetuate stereotypes and promote #homophobia and #plumophobia . If you need some training for next time, here we are, #Snickers.”

Irene Montero Spain’s minister for equality also issued a statement on the advert online. |I wonder to whom it might seem like a good idea to use homophobia as a business strategy,” she tweeted.

“Our society is diverse and tolerant. Hopefully those who have the power to make decisions about what we see and hear in commercials and TV shows will learn to be too.

Podemos, a self-labelled “solidary and plurinational republic” also tweeted against the Snickers advert.
“Faced with the wave of LGTBIphobia, with assaults and even murders, Snickers has no better idea than to make a garbage commercial to tell you that you are not yourself if you have a pen,” the organisation tweeted. Ignore his LGTBIphobia, you are free to be as you please.

On August 5, Snickers Spain issued an official apology for the 20-second advert on Instagram.

“At the Snickers brand we take the rights of equality and inclusion very seriously and we believe that anyone has the right to show themselves as they are. Therefore, from Snickers we want to apologize for the misunderstanding that our new advertising campaign may have caused,” the post read.

The statement continued: “At no time has it been intended to stigmatize or offend any person or group. In this specific campaign, the aim was to convey in a friendly and casual way that hunger can change your character. Again, we regret any misunderstandings and, in order to avoid spreading a message that could be misinterpreted, we will immediately proceed to remove the campaign.”

A spokesperson for Mars Wrigley, the company which owns Snickers, also issued a statement on the Spanish Snickers advert, said: “We would like to whole heartedly apologise for any harm caused by a recent advert for Snickers Ice Cream in Spain. We recognise that we got it wrong and have removed the online content immediately.

“We take equal rights and inclusion seriously, we want a world where everybody is free to be themselves and we believe that as an employer and advertiser we have a role and a responsibility to play our part in creating that world. We will take the opportunity to listen and learn from this mistake and do better in the future.”