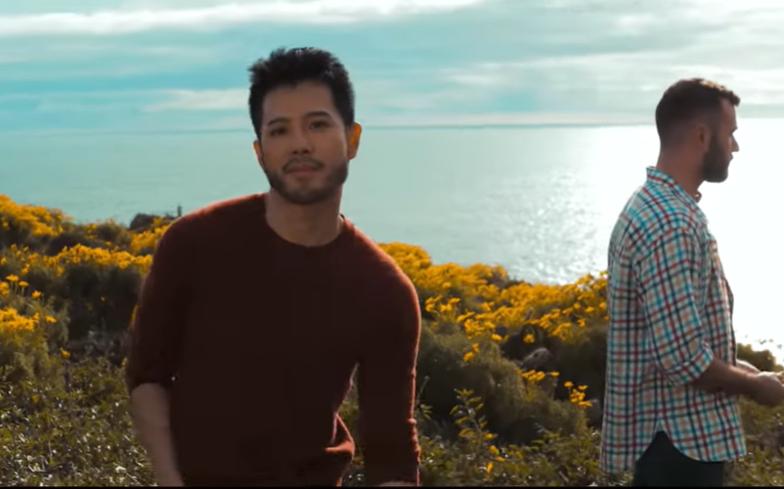 The music video sees the singer performing with his boyfriend.

Singaporean singer Wils has used his new song Open Up Babe to come out as gay. The music video, which was directed by Sam Cahill, sees the singer and his boyfriend on scenic cliffs and beaches in Los Angeles.

The video starts with Wils and his boyfriend sat overlooking the city at night speaking. “Sometimes, I just wanna give up it’s so hard.” “I know but… Sometimes it’s in darkness that you see the brightest stars. You’ll shine.”

The video ends with Wils noticing that he is being watched and releasing his boyfriend’s hand, before embracing him again. It then goes to a quote from the singer, which says: “Sometimes when you open up and look beyond the painful moment you face, you’ll find the most beautiful things.”

In the video description, the Singaporean singer wrote: “Hey guys. This is my first music video since I came out as a Gay.

“Sadly.. I got dropped from my label in Asia after I came out of the closet.. But I’m okay! I’m really grateful for the support from my loved ones. I wouldn’t have made it this far without you guys. If this song meant something to you, I’ll be forever grateful if you could share it to your friends.

“I really hope this reaches the eyes of underrepresented LGBT kids in the world and I can only do that with your sharing. Life’s so much more fun when you’re being you. I promise! xoxo, Wils.

“I’m really glad that I can finally share this new single ‘Open Up Babe’ with you.. This song got me so emotional.

“I remember being in this dark moment where I just couldn’t write anything because I felt like I was living a lie being in the closet. To those who ever held back because of who you are, this song is about letting that go and opening up to the beautiful things in life.

“Sometimes we have to face the things we’re afraid of (the deeper you dive, the freer you get) and really look at it with courage and love.

“Sometimes when you free yourself of the fears you have within, you’re allowing space for others to get in.

“The things we go through in life creates layers of walls. We must learn to unlearn the things that keep us from being truthful to ourselves.”

And in an interview with Billboard, he spoke about his worries over Singapore’s anti-LGBTQ laws. “There’s a law in Singapore called Section 377a of the Penal Code, which says any consensual sexual acts between two men can be criminalised,” he said.

“There are a lot of gays in Singapore, and it’s OK to live as a gay man, but it’s just not really spoken about. That has led to a lot of bullying in the society.

“Like lesbians are being raped by men, and the men would say, ‘Oh, what can you do about it? Shame on you.’