Showstopper! The Improvised Musical an absolute riot from start to finish – review 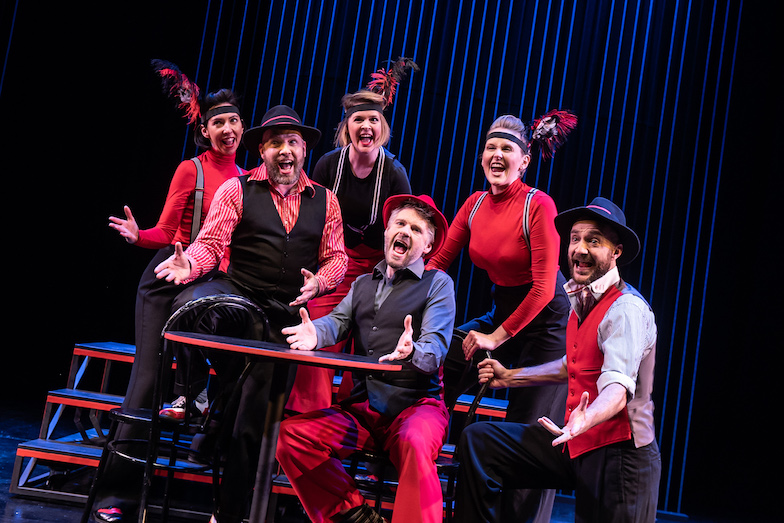 Created and directed by Adam Meggido and Dylan Emery, the Olivier award-winning musical has opened at The Other Palace, with a monthly performance at The Lyric Theatre.

Hosted by Dylan Emery, who takes ideas from the audience and interrupts proceedings on occasion to make suggestions to the cast, Showstopper! sees a company of six actors and a trio of musicians creating a brand new musical every night. We learn that the previous evening’s show, Cream of Yorkshire, was set in a soup kitchen in 1882; past performances included Stiff, a love story set in a funeral parlour, and Sinky Boots, a song-and-dance show set aboard a sunken submarine.

During the opening scene, members of the audience put forward ideas for the setting, title and musical styles – which we voted on by clapping and cheering approvingly. After a few minutes it was decided that our show, A Lotta Dancing, would be set on an allotment in Cornwall, with songs inspired by Rent, 42nd Street, Wicked and Little Women. With that decided, it was time for the show to begin.

Conceptually, Showstopper! sounds like a show that frankly won’t work, so the fact that it does – and remarkably well – is astonishing. We’re treated to surprisingly fully-formed songs and some simple but effective choreography, alongside inspired use of the props and wardrobe. While all the cast turned in strong performances, we particularly enjoyed Pippa Evans in her secondary role as Gary the PE teacher – making use of some excellent physical comedy while working out at the gym, and an entertaining rhyming couplet involving a PGCE.

With the material being improvised it was, of course, not always entirely seamless – but that was part of the charm. There were moments where proceedings felt like they could fall apart at any moment, but when the action was at its shakiest we saw the best being brought out in the fast-thinking performers. We were amazed to see a combine harvester being rapidly constructed from simple pieces of staging and a couple of umbrellas. There were amusing accidental moments which the cast took time to enjoy and we as an audience felt included in the joke.

The achievement here is not that it is a slick, or well-crafted crafted, or nuanced show – the fact that it all holds together so phenomenally well, while being created in realtime, is incredible to watch. The talented cast each turn in strong performances, creating an inspired, entertaining and hilarious musical which had the audience roaring with laughter throughout. An absolute riot from start to finish.