The Shirtless Violinist puts a gay twist on Star Wars 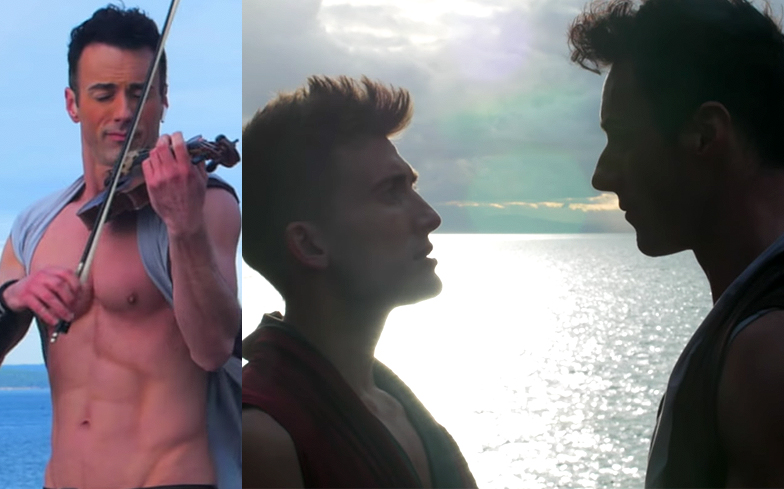 In a gay-laxy far, far away…

Shirtless Violinist Matthew Olshefski has put a gay twist on Stars Wars for his latest video, which sees him perform the iconic theme.

“The Star Wars movies have something for everyone – but I’ve always wondered: Why are there no GAY characters?” he said.

“Well, that’s about to change! My new music video is based on the final moments of The Force Awakens, when Rey sets out to find Luke Skywalker on his isolated island and return his long-lost lightsaber.

“In this version of the story, my boyfriend Paul plays the part of Rey – and instead of seeking Luke, he’s searching for the fabled Shirtless Violinist to return his bow…and possibly confess his love.

“Like the Star Wars movies themselves, this story contains a bit of drama, a splash of adventure, a dash of romance, and at least one really adorable droid. And for the especially observant fan there are brief cameos from Yoda and an Ewok – so keep your eyes peeled and ‘May the Force be with you!'”

He added: “Star Wars contains some of the best, most iconic music in cinema history and this video has been something I’ve wanted to do for a while. With the release of The Last Jedi approaching, I knew it was the right time to pay tribute to a series I love and the music I adore!”

The Shirtless Violinist no stranger when it comes to putting a gay twist on a classic movie, having reinterpreted The Little Mermaid as a same-sex romance earlier this year.

Meanwhile, Star Wars: The Last Jedi will be in cinemas from 14 December.

During an interview last month, John Boyega, who was introduced to the world as Finn in Star Wars: The Force Awakens, spoke about whether he thinks the movie series has a responsibility to push for equal representation going forward.

Related: The Shirtless Violinist’s gay Beauty and the Beast cover is everything