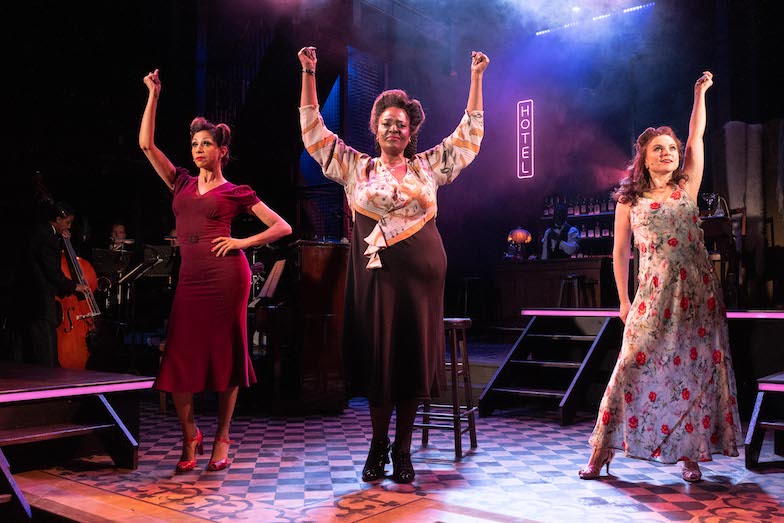 In its first major London revival for over 30 years, Sheldon Epps’ 1980 musical Blues in the Night has opened at the Kiln Theatre, directed by Susie McKenna.

For those unfamiliar, Blues in the Night is less traditional musical, more of a musical revue featuring some classic blues and jazz numbers from the 1920s and 1930s. As such, the songs are left to speak for themselves in a show which is largely dialogue-free. We are briefly introduced to a series of characters who are staying at a rundown Chicago hotel and, save for the occasional entertaining one-liner or put-down, their stories are told through song.

This revival brings an impressive amount to talent to the stage. The cast is led by Olivier award-winners Sharon D Clarke and Clive Rowe, both of whom absolutely shine as The Lady and The Man respectively throughout the production. Debbie Kurup as The Woman and Gemma Sutton as The Girl also have seriously strong voices and are given their own moments in the spotlight, while Aston New as The Hustler and Joseph Poulton as The Barman both deliver some sharp choreography.

Perhaps unsurprisingly it’s Clarke who really steals the show here. Fresh from her Olivier award win this year for her role in Caroline, Or Change, her performance is consistently brilliant. Whether invoking fits of laughter with the innuendo-laden “Kitchen Man”, or reducing her audience to tears with the soulful “Wasted Life Blues”, she’s utterly captivating throughout. Rowe makes a commendable effort of holding his own against the leading lady; his is a performance full of cheeky charm, and he seriously dazzles when he hits the high notes.

The show is held together by an excellent band. Musical Director Mark Dickman leads a tight and surprisingly versatile five-piece ensemble as they power their way through a wide variety of numbers over the course of the evening. The arrangements are thoughtful and varied, while subtle musical interludes do a stellar job of keeping proceedings pacey and setting up the subsequent song.

We’re aware that the concept of Blues in the Night won’t appeal to everyone – it is a show lacking in dramatic depth, with an absolutely wafer-thin plot, while an evening of blues songs won’t hold universal appeal. But what’s here is very powerful indeed – it’s two hours of superb music delivered by some seriously impressive singers.